Treasure won. Masato Maegawa and his crew of arcade game obsessives tore out of Konami in 1993 to start their own company. To make games the right way. “If we don’t find the game interesting ourselves,” said founder Masato Maegawa, “we won’t be satisfied with it.” They’ve never strayed from that ambition, churning out a series of mad boss rushes, huge sprites, blazing chiptunes, and weird comedy in games like Ikaruga, Mischief Makers, and Gunstar Heroes that remain unparalleled.

Unparalleled, but not unimitated. Indie game developers, especially ones making bizarre hardcore action games like Ikaruga, were scarce in the ’90s. Today every device on the planet capable of playing games hosts indie-made exercises in old-school formalism; fire up a Switch, an iPhone, or the Steam store, and it’s impossible to sift through the sprite art and retro fare. The new territory Maegawa and his collaborators set out to create is the foundation of the modern gaming market and art form.

And this is why Treasure’s absence from the gaming world in recent years has been so strange. Treasure went from releasing a new game every couple of years to almost vanishing in the West. Save for a couple of HD remasters and Gaist Crusher, a Japan-only work-for-hire 3DS game made for Capcom, Treasure hasn’t released a major original work since 2009’s Sin & Punishment: Star Successor on Wii.

This spring, Treasure at long last came out of hibernation with a polished version of Ikaruga on Nintendo Switch. I interviewed Masato Maegawa via email about the state of the studio today with the help of Nicalis, Treasure’s new publishing partner. This is an edited transcript of the interview.

GamesBeat: How has Treasure changed the way it develops games over the years? What’s different about the way you work on something in 2018 compared to back in 1993 when you were just getting started?

Masato Maegawa: How we view game development has not changed at all. I strongly feel that a game should be created in an environment where the game is not forced upon the trends of the time, where it’s not all about sales and where the developers can have the freedom to develop games as they like.

GamesBeat: Treasure was an indie studio decades before there were methods for small studios to distribute games themselves. What were some of the challenges you faced as an independently owned development studio in the ’90s and ’00s that small studios no longer face? What was easier to do then that is harder to do now?

Maegawa: The threshold for a small studio to self-publish its own game has been slowly getting lower, we feel. Especially in the case of download-only games, it’s possible for small studios to release games on their own, so we think the game industry is becoming more interesting as we see more indie studios appear. In the case of download-only games, there are difficulties that arise: funding the development yourself, communicating back and forth in English, taking care of multiple in-game languages for worldwide release, etc. But, it’s certainly possible for companies to figure out ways to overcome these challenges on their own. 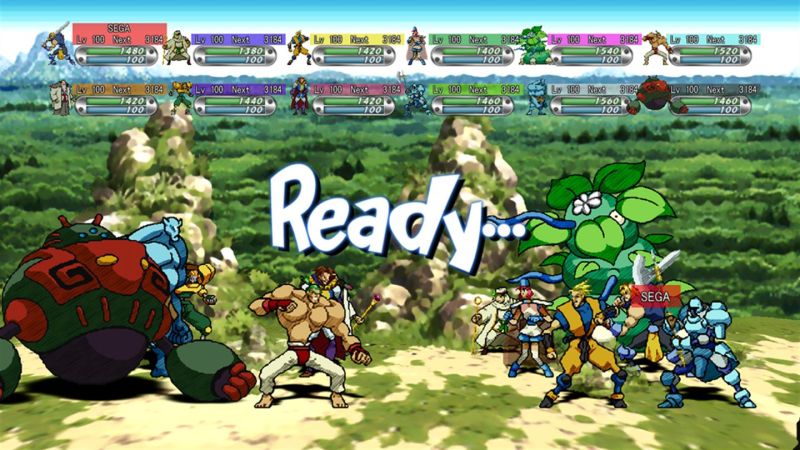 Above: Treasure’s Guardian Heroes is one of its few beloved ’90s classics that has been re-released on digital services like Xbox Live.

GamesBeat: Ikaruga is a remarkable survivor. Many games from the early ’00s remain trapped on old console and arcade hardware, never getting re-released, but Ikaruga has jumped from Dreamcast to Gamecube to Steam and now Switch. So many other Treasure games are still stuck on old machines, though. What are the challenges of bringing older games to new platforms? What Treasure game do you most want to see re-released that’s never gotten a re-release? I’m still waiting to play Rakugaki Showtime!

Maegawa: There are a variety of reasons why it is difficult to re-release an older game. First, in cases where the game’s copyright is not owned by Treasure alone, the discussion between the copyright holders needs to be made. Another challenge that needs to be figured out is whether or not we should port the game as-is, and whether or not it will be accepted by the current audience. When we released Radiant Silvergun with XBLA, an issue arose where we had to figure out how far we needed to go to convert the 2D graphic data into HD. The cost is prohibitive, and getting the HD visuals to the point where the developer is 100% satisfied is very difficult. On the other hand, games that are already made in 3D, such as Ikaruga, are easier to re-release. That was another reason why we chose to re-release Ikaruga this time around.

GamesBeat: What’s different about developing a game you fully own like Ikaruga as opposed to something you develop on behalf of a publisher who then owns the property like Nintendo does with Sin & Punishment or Capcom with Gaist Crusher?

Maegawa: When working together with a publisher on a project, there are times when the sales goals are changed to become significantly higher than the original expectation. So, for a company like ours that likes to make games a certain way, there are times when it can be hard to balance out the line between sales goals and making games the way we want. For instance, because Ikaruga is not the kind of game where we would expect to sell hundreds of thousands of copies of a physical version, we can make it the way we want, because the core users will continue to support us. But when the sales goals are pushed higher, it’s not always possible to make a game just how we like.

GamesBeat: Looking at the gaming world in 2018, it feels like the perfect time for Treasure. The hyper-challenging, unusual pixel-art games in hardcore genres like shooters, platformers, and beat-’em-ups have all come back into style. How does it feel to see so many younger developers taking inspiration from games like Gunstar Heroes?

Maegawa: It makes us very happy to hear that young developers are being influenced by games like Gunstar Heroes. If there are any areas they think they like, we want them to continue to be influenced by those. On the other hand, Treasure should probably get inspiration from those games, too.

GamesBeat: Why do you think shoot ’em ups still have such a passionate audience? Do you think its possible to make an shoot ’em ups as popular and influential today as Space Invaders or Gradius were 40 and 30 years ago?

Maegawa: Thanks to the fact that shooting games are supported by a large number of passionate fans, the genre will never disappear. But, because the difference between casual users and core users is extremely wide, it’s not going to come back to be as popular as it was 30 or 40 years ago. We could possibly increase the fanbase if we completely separated the Easy Mode by changing up the pattern construction and adjusting it to a difficulty where anyone can clear the game. This change could appeal to many newer users, while still showing them the real fun of shooting games. That said, we believe that this is a genre where it’s important for us to keep our core users in mind first.

GamesBeat: Treasure has a remarkable history of technological experimentation. The character warping of Stretch Panic and the unique, audio-based method of sharing player-made levels in Bangaio Spirits are just two examples. What new technology do you find exciting and want to develop for?

Maegawa: Audio sharing for Bangai-O Spirits is just like how personal computer data was saved back in the day, but we think it’s an extremely fun feature. In Dragon Quest XI, cross-play can be done between PS4 and 3DS with the spell of revival, so it’s something similar. Bangai-O Spirits’ method can make cross-play possible, where it completely surpasses the hardware barrier, so we would love to use this method again somehow.

GamesBeat: Treasure has a stable of games that have never gotten a sequel that are ripe for iteration like Silhouette Mirage and Mischief Makers. What game in your catalog would you like to develop a new sequel for?

Maegawa: We’ve considered various sequels, but the wall is high. For instance, Gunstar Heroes is known for Seven Force, a boss that can transform into seven unique forms, but that wouldn’t have much impact if we were to create something similar to that in a modern sequel. At the time, it had a lot of impact because it featured a large-scale boss that was lively and moving around on game hardware with limited functionality. Now, the hardware is much more advanced, so that sort of thing wouldn’t make as big of an impression. We don’t have a strict policy of not creating sequels, but it’s a difficult decision to make.

GamesBeat: Treasure has also made games in series not owned by the company like Gradius V and Astro Boy: Omega Factor. What game or property would you love to create a new game in?

Maegawa: If the publisher who holds the rights offers the idea, we’d love to consider it, but we believe the possibility of getting it done would be difficult.

GamesBeat: Under what circumstances would Treasure allow an outside developer work on one of their series? If a new indie developer said they wanted to make a Radiant Silvergun sequel, how would you work with them?

Maegawa: Even if we outsourced, that too wouldn’t be so simple. Radiant Silvergun’s sequel is Ikaruga, and the next one couldn’t be made unless we made it with Mr. Iuchi. However, if there is another skilled planner, programmer, director and sound designer out there, it might be possible, so we’d like to keep it in mind as a possibility.

GamesBeat: It’s been four years since Treasure released a new game. What’s next for Treasure?

Maegawa: We can’t provide any details, but thankfully we are fortunate enough to receive offers from various companies even now. We don’t have plans to introduce new social games or VR games to our fans; we think we should leave those to companies who are good at those genres. We believe it’s best for us to continue making nostalgic game experiences, just like the way we’ve been making them up until now.