PlayStation’s reign on the TV ad spending charts has come to an end. After seven months with Sony on top, Nintendo has muscled in, just beating out the PlayStation brand in terms of advertising dollars spent.

GamesBeat has partnered with iSpot.tv, the real-time TV ad measurement company with attention and conversion analytics from more than eight million smart TVs, to bring you a monthly report on how gaming brands are spending. The results below are for the top five gaming industry brands in May, ranked by estimated national TV ad spend. 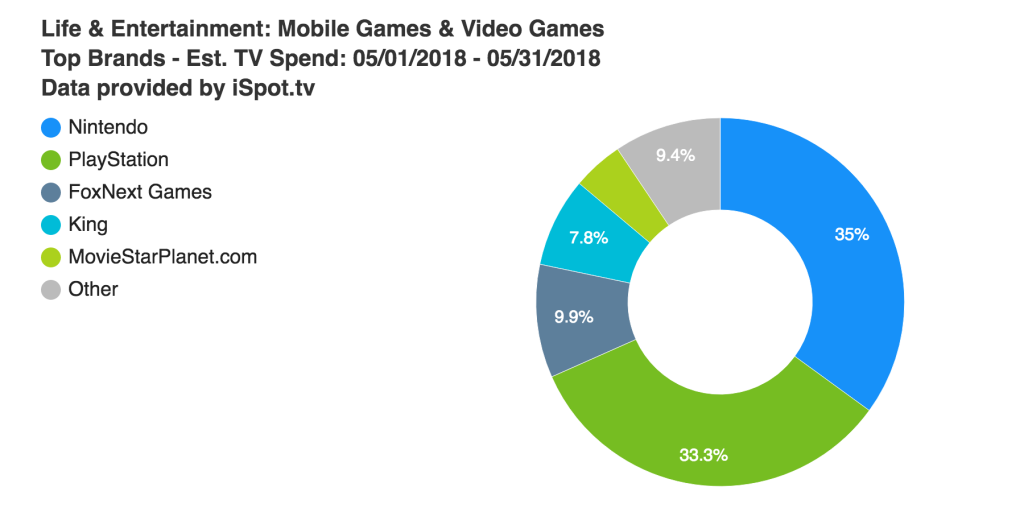 With a total estimated budget of about $8.6 million, Nintendo overtook long-time chart topper PlayStation this time around. The company aired 10 commercials over 4,000 times, generating 427.3 million impressions. “Best Summer Getaway” was the spot with the most spend — an estimated $2.3 million. The brand prioritized a family-friendly audience, with budgets allocated across networks including Nick Toons, Nick, and Teen Nick, and during shows such as SpongeBob SquarePants, The Loud House, and Victorious.

PlayStation was right behind Nintendo with an estimated spend of $8.2 million on four ads that aired 928 times and generated 387.5 million impressions. The commercial with the biggest budget (est. $4.5 million) was “Detroit: Become Human: Choices.” Sony spent the most airing spots on ESPN, Adult Swim, and TNT, and during programming such as NBA basketball, South Park, and Family Guy.

In third place: FoxNext Games, which aired two ads 906 times by deploying a total estimated budget of $2.4 million, generating 113.6 million impressions. The spot with nearly all of the spend was “Assemble Your Squad.” Fox, FX, and FXX were three of the networks FoxNext prioritized, while The Simpsons, Legion, and NASCAR were among the programming given the biggest spend.

Once again King is at No. 4, spending an estimated $1.9 million on five commercials, all for Candy Crush, which ran just over 3,000 times and resulted in 470.3 million TV ad impressions. “Candy Crush Saga: It’s Party Time! Get That Sweet Feeling!” was the spot with the largest spend — an estimated $924,253. The brand prioritized spend across networks including ABC, CBS, and TNT, and during shows such as The Chew, The View, and The Young and the Restless.

MovieStarPlanet.com rounds out the ranking with $1.1 million in estimated spend on five spots that aired 425 times and generated 52.7 million impressions. The company put the biggest push (est. $611,850) behind “Joint Brand.” Prioritized networks included Nick, Nick Toons, and Teen Nick, and some of the shows with the largest spend included SpongeBob SquarePants, PAW Patrol, and Victorious.