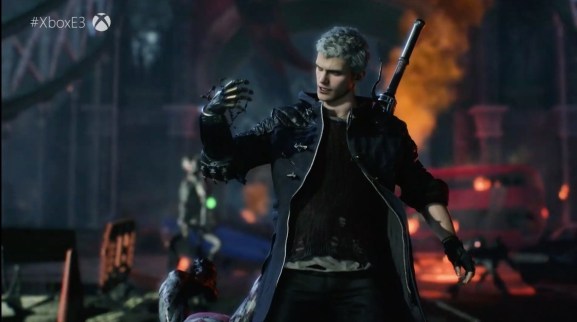 Nero’s back, and he has a robot arm and an updated haircut. Devil May Cry 5 debuted at Microsoft’s Xbox E3 event with a fast-paced trailer that showed the iconic demon hunter wailing on baddies with a robotic arm. The game is slated for a Spring 2019 release.

Capcom director Hideaki Itsuno enthusiastically took to the stage after the trailer, proclaiming that it’s “the best game he’s ever made.” It’s been 10 years since Devil May Cry 4 came out in 2008, though in 2013, developer Ninja Theory released a reboot, DmC: Devil May Cry. Protagonist Dante remains one of the company’s most iconic video game characters, equal parts campy and stylish as he hacks and slashes through enemies.

Nero debuted in the last installment, but he has yet to capture fans’ attention like his predecessor. Maybe giving him a featured spot in his own game will help turn that around.

DMC 5’s trailer featured a fast-talking sidekick hyping up Nero’s ability to punch the lights out of demons. Other than that, it doesn’t give much away about the game’s story, except that it will have plenty of beatdowns with a robotic arm — which is pretty much all anyone needs to know.

And for people wondering where the original demon slayer is among all of this, we get a shot of him at the end of the reveal video. He’s zooming around the city on a motorcycle that we’re pretty sure he’ll eventually ramp off of a building and into a giant monster’s face.