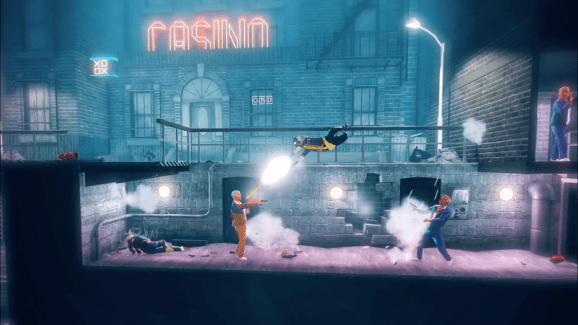 Taito’s Elevator Action series may have been forgotten to history, but Devolver Digital is bringing new life — and plenty of death — to the classic walk-and-shoot formula with My Friend Pedro, announced for Nintendo’s Switch and Steam PCs. The impressive side-scrolling shooter is in the works from DeadToast Entertainment, a one-man shop created by a former Media Molecule developer.

My Friend Pedro stars a gunman who kills scores of bad guys at the urging of a talking banana named Pedro, who narrates the trailer. The action recalls 1983’s Elevator Action, which pioneered the “shoot spies as they pop out of doors” concept, though 1994’s Elevator Action Returns perfected the idea with more intense action and visual flair. My Friend Pedro goes even further, as its hero flips through the air in Matrix-style bullet time, unloads ammo from two guns at once, and uses objects such as frying pans to bounce shots at enemies.

From its crazy premise and player animations to its copious splashes of blood, the game’s style has an obvious precedent: Ryan Reynolds’ comically violent Deadpool, who cuts through bad guys with Hong Kong-style cinematic spins and sight gags. But My Friend Pedro avoids the superhero theme in favor of real world objects, bringing skateboards, motorcycles, and even rope-and-hook rides into the physics puzzle mix. There are elevators, too, but your character seems to get a lot of air time by other means, with window and door breaches figuring heavily in the trailer.

My Friend Pedro should hit Steam and Switch in the first quarter of 2019, including an automatic GIF generator that can share your favorite moments with friends. However, DeadToast’s site is already taking Steam wishlist requests, and says that it will be “released on PC when it’s ready” — hopefully early.