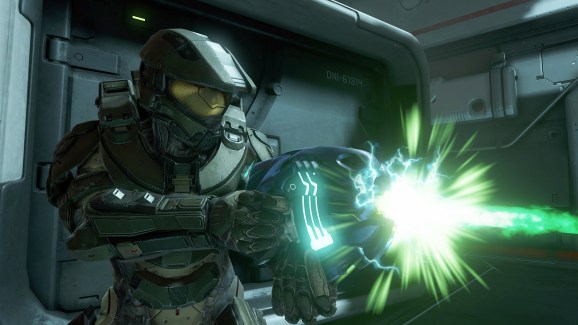 Master Chief (as shown in Halo 5) has been featured in a Halo VR experience, but won't be in an Xbox VR game any time soon.

Microsoft’s 2018 E3 media event was undeniably impressive — a demo reel packed with announcements of compelling games, upcoming service improvements, and even hardware teases. But despite Microsoft’s 2016 promise of VR support for the Xbox One X, the event had zero VR announcements: no hardware, no software, and not even a hint at the future of immersive tech.

This morning, TechRadar explained the reason: Microsoft has decided to keep focusing its VR efforts on Windows PC “for now.” According to Xbox VP Mike Ybarra, since people are already engaging with Windows Mixed Reality devices and software through PCs and the Steam store, Microsoft is satisfied — and considers Xbox support difficult because there are still “challenges to be solved” in the living room.

Microsoft’s Phil Spencer has previously said that a wireless headset might be necessary for living room VR use, contrasting with the universally tethered Windows Mixed Reality solutions currently available for PCs. So despite various Minecraft AR and Halo VR gaming demonstrations Microsoft has offered in the past, say nothing of all the potentially VR-capable games it’s showing at E3 this year, the suggestion is that Xbox owners should not expect VR game support “any time soon.”

While this will be a disappointment for plenty of Xbox gamers, particularly those who chose the Xbox One X specifically to avoid spending two or three times as much on a gaming PC. And it will certainly help Sony, which has spent the last week teasing a series of compelling VR announcements. Hit Steam title Beat Saber‘s upcoming PSVR release was made official right before Microsoft’s event, a new collection of PlayStation VR Aim shooters — including Blood & Truth — are going to be on display, and Media Molecule’s Dreams is set to enable players to create their own VR worlds and experiences.

The absence of an Xbox One X VR solution also means that hitmaker and longtime Xbox supporter Bethesda will have no other console option than the PlayStation for its upcoming Prey and Wolfenstein VR initiatives announced last night. Given how successful The Elder Scrolls V: Skyrim was for PSVR, however, Bethesda mightn’t mind; the game was the most successful PSVR title of 2017, and Doom VFR was another winner.

If other PC VR game developers hope to augment their Steam and Oculus Store sales with game-thirsty console customers, Microsoft’s decision to hold off on VR may wind up continuing to be Sony’s gain.