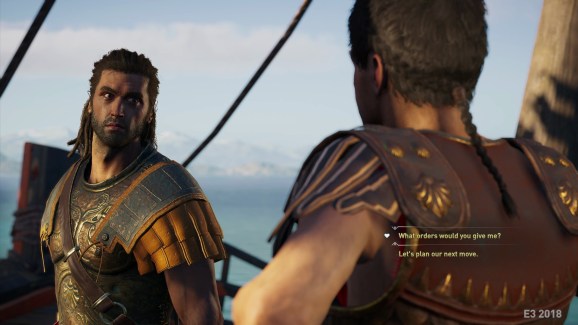 Assassin’s Creed: Odyssey is the culmination of Ubisoft’s efforts to turn its historical playground adventures into full role-playing experiences. The publisher started that effort with Origins, and now Odyssey is overflowing with loot, dialogue options, and romanceable characters. Ubisoft is leaning into these elements while a studio like BioWare, which is known for its role-playing games and love stories, is stepping away from those mechanics in favor of shared online multiplayer experiences.

When it comes to Assassin’s Creed’s transformation into an RPG, the publisher isn’t trying to hide its colors. It has a freak flag, and it didn’t take long into my hands-on demo before the game let it fly. I got to play several sections of Odyssey during a 90-minute session, and those included an introduction to the world, naval combat, a story mission with Socrates, and an epic battle. The ship combat is a refined version of Assassin’s Creed 4. The Socrates mission is Odyssey’s version of getting quests from da Vinci. And the battles was Assassin’s Creed combat by way of Dynasty Warriors complete with enemy generals that you have to eliminate to turn the tide of the fight.

But it was in the world introduction where I saw just how ready Odyssey is to throw itself at you. I played as the woman character Kassandra in the other parts of the game, but I played as Alexios through this opening area. Soon after I started, I met up with some of the Spartan-led rebels who are fighting against the Athenians as part of the Peloponnesian War. You meet a woman named Kyra who has called you and one other Spartan fighter (a man named Thaletas) to help her fight back against Athens, and — after an argument — you get the choice to side with her quiet and careful approach or his reckless desire for blood in a direct fight.

I chose the dude’s idea because this was a demo, and I wanted to see the stuff that might cause the most drama and conflict. What ended up happening though is that I met with the man on his boat, and we spent the next couple of minutes flirting … hard.

What was funny about this is that this romantic banter felt like it came out of nowhere. I was choosing dialogue options to try to keep the story going, and suddenly Alexios begins making eyes at this man.

“This is going to happen, right,” Alexios didn’t exactly say, but he might as well have.

But the message was apparent: This game is down to fornicate, and it’s up to you who you want to get greasy in Greece with.

“There’s dialogue options that will allow you to romance characters,” director Scott Phillips told GamesBeat in an interview. “Whether you engage in it or not is completely up to you.”

And that all comes back to making Assassin’s Creed: Odyssey feel like your experience. It is putting you in the role in role-playing. Ubisoft is serious about delivering those options, and that ethos is finding its way into all aspects of the game.

Unfortunately, not every character is a romance option in Assassin’s Creed: Odyssey.

“No,” said Phillips. “I can say that you cannot romance Socrates.”

Sigh … so my search for the perfect game continues.