Mega Man 11 is one of the games I’m most excited about at the 2018 Electronic Entertainment Expo (E3), the big gaming trade show in Los Angeles. Capcom’s 31-year-old action-platformer series is one of my favorites. But I was also a little scared. What if this new game is too easy? What if the new mechanics dilute the experience? What if it doesn’t feel like Mega Man?

After my demo, I’m not afraid anymore. Mega Man 11 is fantastic. It maintains the sharpness of the classics, but the new Double Gear mechanics adds depth and help Mega Man 11 stand out as something more than just another retro throwback.

I can’t wait for its October 4 release on PC, Switch, PlayStation 4, and Xbox One. Here’s why.

I already wrote a whole column defending Mega Man 11’s 2.5D aesthetic. Playing it person assured me I was right. Mega Man 11 looks great. Characters are expressive, and the colors are vibrant. I played my demo on a PlayStation 4, and the game ran smoothly the entire time.

The running and jumping feel perfect. As someone who’s played through every Mega Man game multiple times, I thought the physics are just right. One thing did feel different. Moving on ladders feels slower. This confused me, but I soon understood its purpose. In the past, ladders were something of a safety net. You could quickly run to one to get out of the way of rampaging enemy. Now that it takes a bit of time to mount one, you can’t rely on them as much. 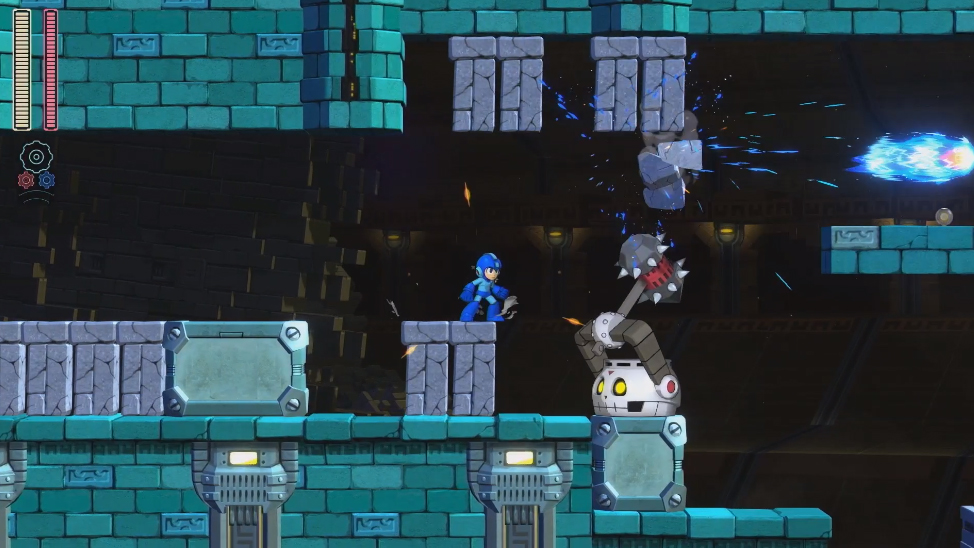 You can also slow down time and power up your shots. This is the Double Gear system. You can activate either of these abilities whenever you want, but you can’t use both at the same time. And you can’t keep them up forever. If you do, you’ll overheat, and you’ll have to wait a while until you can use them again.

I was worried that the Double Gear system would make Mega Man 11 too easy, but Capcom has designed its levels to work with these mechanics. First off, Mega Man 11 is hard (I played on Normal Mode). Obstacles come at you fast. Managing your Double Gear meter effectively so that you can slow down time at the right moments is a huge part of getting through a stage.

I got to play through the Block Man and Fuse Man levels. Despite my Mega Man expertise, I found more than enough challenge. As I played, I got better at knowing when to use the Double Gear abilities.

The Double Gear system is also a huge help for boss fights. I played through the Block Man and Fuse Man levels. Mega Man bosses are usually difficult but simple. They only have a couple of moves and move around in predictable patterns. These Robot Masters have multiple phases.

Halfway through the fight, Block Man transformed into a giant. He would fling rubble at me and slam his fist to the ground. I had to use Double Gear so I could dodge his attacks and attack his weak point when I could.

I’m embarrassed to say I didn’t beat him. But I’m also glad I couldn’t. Each try, I was getting closer. That’s why I love Mega Man. If you’re persistent, you always get better. You climb further to victory every time until you finally get there, and the struggle makes it so much more satisfying.

I was able to beat Fuse Man, largely because I went to him second and I was much better at using Double Gear at this point. He’s fast, so slowing down time is a big help. But, again, you have to be smart about when you do it. If you use Double Gear when you’re also able to jump up and shoot him a bunch, you’ll eventually beat him. When I did win, it was on my last life with a sliver of health left. I almost screamed for joy (which would have been a bit awkward in the quiet Capcom PR area I was in).

Mega Man 11 knows it has to remain faithful while offering something new if it wants to succeed. It’s perfectly straddling that line. It feels like Mega Man, but the Double Gear system adds something special.

I could go on about a bunch of other little things I loved. You can summon the Rush Coil just by pushing its own dedicated button. You don’t have to equip like it’s one of your weapons. Speaking of weapons, after I beat Fuse man, I got to try out my new electric ability in a demo area. That’s so smart, since you usually can’t try out a new move until you go to a new stage. And then you’re wasting ammo while learning what exactly you got.

After my demo, I’m even more excited for Mega Man 11.