Overkill’s The Walking Dead is a major new console and PC game coming from Starbreeze, Skybound Entertainment, and 505 Games. The game has a brutal and riveting trailer that debuted last week. But so far the gameplay is way behind that.

GamesBeat’s Mike Minotti and I tried it out briefly at a recent press event ahead of the Electronic Entertainment Expo (E3), the big game trade event in Los Angeles. Inspired by Robert Kirkman’s original graphic novels, Overkill’s The Walking Dead is a four-player co-op multiplayer first-person shooter in which players must band together on a variety of missions and raids to find survivors, secure supplies, and stay alive.

The companies have worked on the game for a while, and they want to make a splash at E3. But we had a tough time playing the co-op mission that 505 set up for us to play. We had three of the four player slots filled, so we went into it with a handicap.

It’s the world of The Walking Dead, one of the most popular shows on television, where the undead walk the Earth and converge on any big sounds to eat the people who are making them. So we knew we had to be quiet.

But rather than setting up the mission in a linear way, where we faced obstacles and had to figure out how to overcome them, the developers set the zombies up in random way. But they were all close enough together where we couldn’t improvise much.

We had melee weapons and pistols, and we were walking down a street with a lot of barriers. We could have gone straight into a crowd of zombies, but we wisely chose to detour into a house. 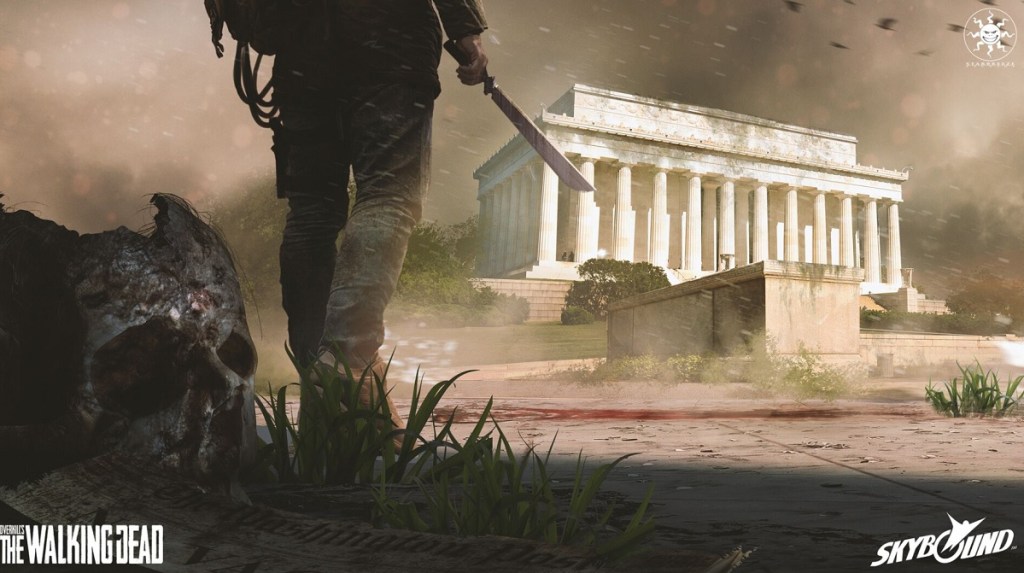 Above: Overkill’s The Walking Dead

In the house, we had to take out a couple of zombies on the lower floor and then scavenge to find some metal and some food. Then we went upstairs and found more zombies. We killed that one, but made too much noise. Then the herd of zombies came running up the stairs and we had to pull our guns out. Then we ran out of ammo and the zombies kept coming. We all got pulled down and tried to revive each other.

But it was too late. We were doomed. We tried this a few more times and were doomed each time. We tried to flank around other buildings but came across locked doors. The cabinets we opened had some useless things in them. So our object was simply to go around the zombies, and we couldn’t accomplish that. One of our last resorts was to try something like The Charge of the Light Brigade. That didn’t go over well.

I felt like giving up. But it taught me a nice lesson. You can’t just build an open world and stick zombies in it and expect that to be fun. You have to create a path through it where you can discover things and find the path through to the next stage. If you don’t do that, the randomness of the open world becomes boring and pointless. This is the same sort of problem that I had at the beginning of State of Decay 2, another zombie open world.

Sadly, our gameplay wasn’t anything like the trailer. The game comes out this year on the Xbox One, PlayStation 4, and the PC.