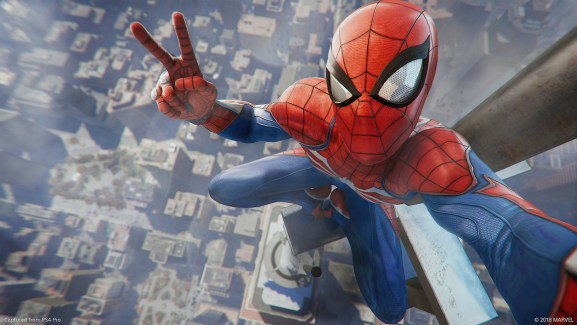 When the bizarre (but entertaining) PlayStation media briefing ended the night before the opening of the Electronic Entertainment Expo trade show in Los Angeles, Sony Interactive Entertainment ushered us out into a Spider-Man-themed after party. After spending time on games like Ghosts of Tsushima, Death Stranding, and The Last of Us Part II, the publisher ended up only having one playable demo for us to get our hands on: Spider-Man.

But that didn’t come across as lacking because Sony seems confident in what it has with that game, and my take away from spending 15 minutes getting through the demo is that the company has every right to expect big things for its action-adventure starring your friendly neighborhood superhero.

Spider-Man is amazing — at least based on what I played. A lot of that comes down to developer Insomniac Games nailing the swinging mechanics. The game cheats and fudges the physics to do whatever it can to keep Peter Parker gliding effortlessly through the air. But Insomniac has also brought that same fluidity to combat as well as to a boss fight with the Shocker that culminated in having to use all of Spidey’s abilities to simultaneously avoid attacks and to disrupt his shields long enough to attack him.

All of these moments were hyperpolished and seemingly ready for Spider-Man’s September 7 release date. The gameplay looked like it was running at 60 frames per second in near 4K on a PlayStation 4 Pro, and that made New York City pop to life as I sent the webcrawler flinging carelessly through the air. And getting that final-release sheen combined with the swinging, the combat, and the trademark quips made me realize that I’ve wanted this game for nearly a decade and a half — and it’s absurd that we’ve had to wait so long for it.

In 2004, Activision and developer Treyarch released Spider-Man 2: The Game, which was the first time that a game adaptation of Spider-Man physically connected the hero’s webs to the buildings around him. Prior to that, his webs would just hang down from the sky. That not only looked disconnected, but it made the swinging action feel limp and dull. But Spider-Man 2 fixed that, and it turned swinging into something that was simultaneously skill-based and effortless. It was one of the most exhilarating actions in any game up to that point, and it should have been a formula that Activision and Treyarch could have repeated for years.

Instead, nearly every Spidey game after that 2004 release is garbage. We went the entire HD-console era without a worthy Spider-Man 2 successor on Xbox 360 or PlayStation 3.

And now Spider-Man for PlayStation 4 is coming, and it has exposed that gap in quality games in this franchise for the crime it is. We shouldn’t have had to wait for this, but I’m so thankful that it’s coming now. It takes the swinging and physics of Spider-Man 2 and improves them in every way. Peter Parker feels even more graceful. During my demo, I would try to get him to hit the ground between a pair of cars over and over, but pulling the right trigger at the last second would always activate a smooth transition animation that would keep him airborne and looking cool as hell.

I was enthralled, and I am not looking forward to waiting a few more months for something that we all need in our lives right now.