Casey Hudson is one of BioWare’s longtime leaders who helped launch big games such as Star Wars: Knights of the Old Republic and the Mass Effect series. BioWare, which Electronic Arts acquired in 2007, put him in charge of some of its most important projects in an executive producer role.

Hudson was riding high after completing the Mass Effect trilogy, which was recognized as one of the game industry’s biggest and best sci-fi role-playing game series. But he found a natural breaking point after the trilogy, and he left in 2014, after work had started on Anthem. He needed a break from the burnout, and did not work on the fourth game, Mass Effect: Andromeda, which was widely panned.

Then he took a job as creative director at Microsoft, where he said he learned some things about management and studio culture. In July 2017, he returned to BioWare as general manager of the studio. I interviewed him back when he was talking about the first Mass Effect game, and I recently interviewed him again about his personal journey and the preview of Anthem during the EA Play event ahead of the Electronic Entertainment Expo (E3) in Los Angeles.

GamesBeat: How would you describe the personal path you’ve been on through all these different games? From Mass Effect on?

Casey Hudson: For a long time—I did four games in a row as executive producer, including the Mass Effect trilogy. At that point, I felt a sense of plateauing to a degree, looking for a change and a rest and things like that. I got that in my few years away from the game industry. I was at Microsoft, and I was still kind of involved in games, but also doing mixed reality and HoloLens, things like that.

I was learning, frankly, some things that I need in my role as general manager – the ability to influence a larger organization at scale, leadership and organizational aspects of the GM role. I just wouldn’t have been able to do what I’m doing now had I not done that.

GamesBeat: What lured you back into it?

Hudson: It’s an interesting one. Part of it was the offer to come back as GM and lead the studio overall, which in itself is quite a difference from the role I was in as executive producer. I love BioWare. I started there out of school, worked there for more than 15 years. I feel like I helped build the studio from the early days. To be able to come back and lead it and continue the legacy of the studio was a special opportunity.

GamesBeat: What was it like when you first arrived? Were there any more immediate things you needed to get done?

Hudson: A few of the first things I wanted to get done—first of all, to really find the soul of the company. The reason for that is because I do believe that innovation is essential in games. But in order to know what you can change and innovate on, you have to understand who you are at the core. We worked really hard on that, updating our vision and our mission so that we could define it in a way that wasn’t a moment in time. It wasn’t a specific thing.

Back in the early days, we were makers of PC role-playing games in the Dungeons & Dragons universe. That’s a very specific thing. But since then we’ve created new IP. We’ve moved into shooters and action and things like that. What allowed us to do those things and still feel like BioWare is because there’s a common thread across those games. We wanted to identify that center of gravity that’s always been there.

By doing that, now we can go to games like Anthem, as we finish that, and envision other games in the future in a way that–even as we provide innovation that’s going to delight players, we’re doing it in a way that, when you experience the game, you’ll say, “Yep, this feels like a BioWare experience.” 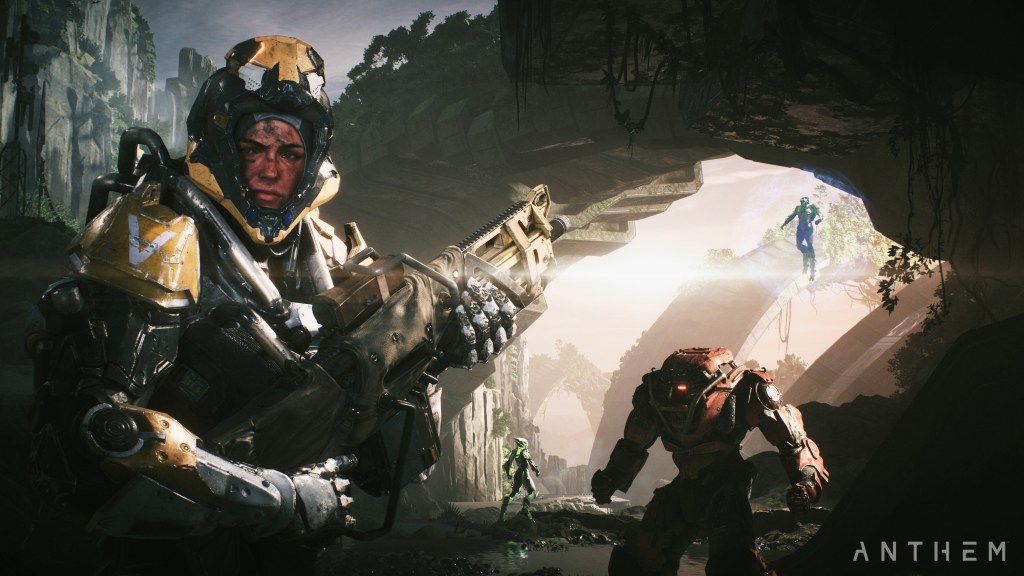 Above: Anthem is EA’s take on Destiny.

GamesBeat: Were there people who felt kind of burned out on Mass Effect, who wanted to do something new?

Hudson: Part of why we initially envisioned Mass Effect as a trilogy — you remember, that was around the time in Amsterdam, a long time ago – is because it takes a long time to make games. We could imagine that after three games, a lot of time would have passed, and we would probably, as developers, want to do some kind of significant update to what we were doing. Likewise, fans would probably want something that was a reinvention or a reimagination at that point.

The idea of it being a trilogy kind of provided a break point that everyone could look forward, and then a refresh period. It was around that time when the original Mass Effect team moved on to start Project Dylan, which became Anthem. Partly because it was a good time to do that shift into a period where we could create new IP.

GamesBeat: How did you fit in with the timing of starting up Anthem?

Hudson: When I was still with the studio in 2012, 2013—we kind of spent 2012 finishing out a lot of DLC for Mass Effect 3. As we got into 2013, we started putting people full time toward Anthem. I was on it for, I would say, a full year, full time on Anthem, before I left the studio. Then the first time I saw it again was the E3 stuff from last year, which was really interesting, because—I messaged the team afterward and said, “This is really everything I would have hoped you’d do with the world we were creating.”

GamesBeat: That searching for BioWare’s soul, did you find something that was more easily articulated? Was it very different from what the doctors, cofounders Ray Muzyka and Greg Zeschuk, might have thought of?

Hudson: It’s an articulation of what we were trying to do in the early days and what we’ve done when we’re at our best. Our mission is that we create worlds, adventure, conflict, and companionship that inspire you to be the hero of your story. There’s a lot of reason behind all of those things, including that—much of the feedback we get from players is about not just how they feel like the hero inside the games, but because there’s agency in the games and you can try different things, that exploration gives them confidence to be heroes in their own lives. Those are some of the very strongest and most powerful stories we hear from players. We wanted to make sure we continued to do that.

But every word in that is specifically chosen, including the companionship aspect. We build games that are very much about a shared experience. It’s not just you experiencing a series of trials, but you’re always with a group. You can turn to your friends and say, “Wow, what did you think of that?” Sometimes they’re AI friends and sometimes they’re real friends, but a shared experience is part of it.

We were very careful to identify a mission that is also timeless. It’s not that we make PC RPGs. It’s that, if you imagine games on devices and technologies many years in the future that we can’t imagine now, there are things that should still hold true so that you can play those experiences and say, “It’s different from anything I’ve done before, but it’s BioWare game.”