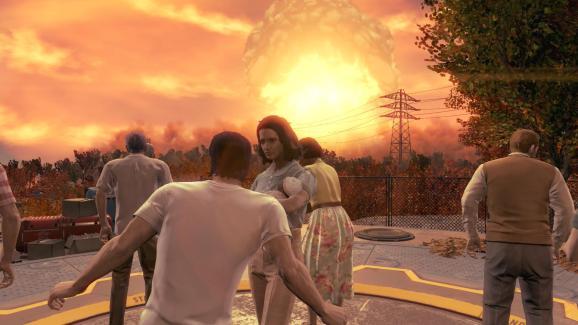 Fallout 4 VR is one of the largest and most ambitious virtual reality games to date. It features a massive open world, hundreds of characters to meet and talk to, and some of the most intricate areas to explore. As one of the first people to emerge from a vault after a nuclear fallout, you explore the wasteland and collect gear to build up bases and survive against the enemies and bandits of a harsh new world.

It’s set in Boston, or what remains of it, and has gone on to be one of the best-selling VR games to date. Fallout 76, Bethesda’s next entry in the long-running series, is due out later this year and the company isn’t currently planning any VR support for that title.

Ever since Fallout 4 VR first released on PC VR, fans of the game on PS4 have been asking about a PSVR release. Skyrim VR first released on Sony’s headset, after all. In the past Bethesda has always given blanket statements about wanting to bring all their games to as many platforms as possible, but at E3 2018 this week we got a more specific answer out of their Senior Vice President of Global Marketing and Communications, Pete Hines.

So, will Fallout 4 VR ever come to PSVR?

“I don’t know whether or not that will ever happen, like what the technical implications are,” explained Hines. “Fidelity-wise I don’t know if it would hold up and I’m not aware of where it is or if it’s even in the cards for later down the road. We’ll see.”