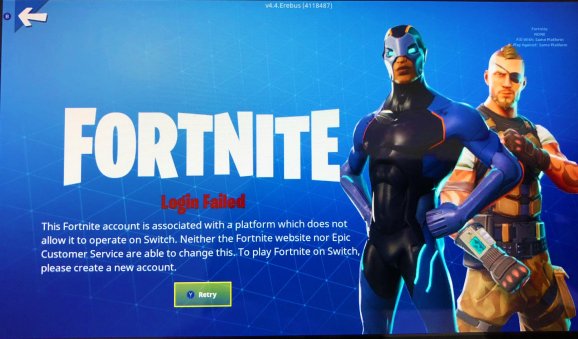 PlayStation thinks you have enough people to play games with already, so you can’t possibly need cross-platform multiplayer to play with someone on Nintendo Switch or Xbox One. And if you want to use your Epic account to track your progress in Fortnite, well … you can’t — but why don’t you just keep using your PlayStation 4. If you don’t find those answers satisfying, Sony has nothing else to say.

Sony Interactive Entertainment issued a statement to the BBC today that doesn’t deal directly with the core issue that players are taking issue with. Someone who started an Epic account on PS4 cannot use that account on Xbox One or — and more important — the Nintendo Switch. This has caused problems this week for Fortnite fans because while most people don’t bounce between PS4 and Xbox One, the hybrid home/handheld Switch system enables fundamentally different opportunities for play.

So when the game launched on the Nintendo platform on Tuesday, many people found out that Sony was blocking them from using their third-party account outside of the PlayStation ecosystem. And that has overshadowed Sony’s PlayStation announcements as part of the Electronic Entertainment Expo trade show in Los Angeles this week.

This controversy also comes alongside a slide in Sony’s stock value. Sony’s stock ended June 11 at $50.50, and it is trading at $49.34 today, according to Google Finance. And now Sony has gone on the record about the Fortnite issue.

Here’s the full statement it made to the BBC:

”We’re always open to hearing what the PlayStation community is interested in to enhance their gaming experience. Fortnite is already a huge hit with PS4 fans, offering a true free-to-play experience so gamers can jump in and play online. With 79 million PS4s sold around the world and more than 80 million monthly active users on PlayStation Network, we’ve built a huge community of gamers who can play together on Fortnite and all online titles. We also offer Fortnite cross-play support with PC, Mac, iOS, and Android devices, expanding the opportunity for Fortnite fans on PS4 to play with even more gamers on other platforms.”

I’ve reached out to Sony for a clarification specifically about blocking the Epic account on Switch and Xbox One, and I’ll update this story with any new information.

“According to The NPD Group’s Games Acquisition Monitor, at the end of Q1 over 40 percent of Switch owners in the US also owned a PS4,” NPD analyst Mat Piscatella wrote on Twitter. The Fortnite issue should be rectified beyond a statement suggesting those consumers make new friends, imo.

But this statement from Sony echoes what Shawn Layden told me when I spoke with him at a PlayStation event at last E3. This was before anyone was making an Epic account for Fortnite and just a few months after the launch of the Switch, so I was primarily asking him about cross-platform multiplayer. He told me that PlayStation has enough people for you to play with, so Sony doesn’t need Xbox or Switch players. That ignored the issue of friends who own different platforms, so it didn’t deal with the problem even then — but now, in a world where Fortnite is a more important platform to many than PlayStation, Sony’s statement seems incomplete.