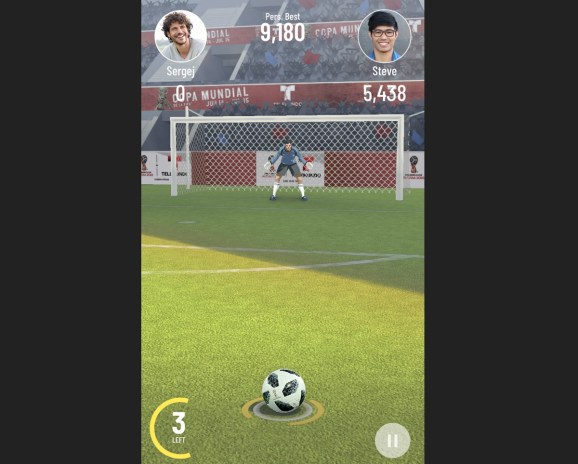 Mobile messenger games are becoming popular on a variety of platforms, and Facebook recently said it will turn on monetization for the games. Goal is free-to-play and available now on Facebook’s Instant Games platform.

A year ago, TreasureHunt raised $6 million for its new mobile game studio founded by veterans from EA, Zynga, Rovio, and King. It’s launching Goal ahead of Telemundo’s exclusive Spanish-language coverage of the 2018 FIFA World Cup Russia, which will air June 14 to July 15.

“The World Cup provides us with the opportunity to tap into the passion of soccer and engage with our viewers in different, authentic ways leading up to and throughout the tournament this summer,” said Miguel Lorenzo, director of digital product development at Telemundo Deportes, in a statement. “We are excited to launch this collaborative initiative with Universal Brand Development, which is Telemundo Deportes’ first release in the games space, and we look forward to offering a high quality social gaming experience for our soccer fans.”

In the simple game, you put your soccer skills to the test against a goalie to score penalty kicks. Your goal is to become a penalty kick all-star. You flick the soccer ball with your finger on a touchscreen, and then you tap the screen once more to give it some spin. Players can amass points by becoming better at penalty kicks, earning experience points to unlock new footballs, and competing against friends by challenging their high scores. As players advance, the level of difficulty intensifies in each session.

“At Universal, we want to offer games wherever people want to play them, so we are thrilled to be launching our first game on Messenger,” said Chris Heatherly, executive vice president at Universal Brand Development, in a statement. “TreasureHunt has been an amazing partner in pioneering this platform with us, as has Telemundo. We think there is a fantastic opportunity with Telemundo’s audience for gaming and there’s no better place to demonstrate that than soccer and the World Cup.”

“We really wanted to capture the momentum leading up to Telemundo’s coverage of the World Cup by creating a highly social, super accessible game that can be enjoyed by sports fans anywhere,” said Kyle Smith, CEO of TreasureHunt, in a statement. “Our goal was to create an experience that appeals to a mainstream audience by making them feel part of this historic worldwide tournament.”