Question: We didn’t touch on monetization yet – loot boxes, subscriptions. Where do you think things are when it comes to both the rise in the use of loot boxes, and some of the legislation that’s bubbling now?

Gallagher: When it comes to monetization inside video games, our industry is built on innovation. It’s built on experimentation. You would not have free-to-play if video game companies hadn’t said, “I have a different way of connecting with the consumer where they’ll still pay for a great experience, but they’ll do it differently.”

What we’ve seen with this latest concern about the business model evolution is—the facts are really important. We engage with policy makers here and abroad, because the conversation around this, as you know, is global. It’s not just here in the United States. Loot boxes are absolutely not gambling. We’ve been definitive and clear about that from the beginning. The reason why is the gamer always gets something. The use of the monetization scheme is entirely optional. You don’t have to do it to play the game. When you do, you always get something, and then the last part of the test is, that something you get can’t be sold in the real world.

Those elements make that crystal clear to us. It’s not gambling. We’ve made that case around the country, because there have been 22 different legislative attempts by the states to focus on this. In each of those cases we’ve been successful in making the truth known, and then having the policy reflect the truth. We’ve been able to do that thus far. We’ll continue to do it.

Around the world, the same conversation is going on. There’s a disagreement—I think it’s Belgium and the Netherlands? We have two European countries that have a difference of opinion on this, and that’s going to work itself out over time. We’ll continue to make the case about the truth.

Here’s why it’s important. That innovation in business models is what drives the ability of the industry to hire the best talent, to make the next game, to make the next level, to make that magic happen for consumers over and over again. Gamers support the industry by paying for games, and then that stream is what creates what you see here at E3, and the future that lies in front of us. Those monetization schemes—the best way for our industry to address those is to get it right with the consumers.

Guess who finds out first when it’s right or wrong? The publisher gets it right away, immediately, loudly, clearly, and with impact. That’s how consumers and gamers speak to the industry directly. That force is incredibly powerful. It’s one we’ve been very responsive to. You saw that with our April changes to the ESRB rating system.

Question: You said the attempts by states—are you saying that none of those now are where they were when they began?

Gallagher: They’ve all been—there’s been no action taken, is probably the best way to say it. That’s our current state of play.

Above: Epic shoots us with a Fortnite update tomorrow.

Question: You touched on Fortnite. You said it’s having an effect here, although we’re not seeing it here yet, up front.

Gallagher: Fortnite was on the floor last year! You just had to know, out of the other 2,000 things on the floor, that it was going to be the one.

Question: The bigger thing is, what are you seeing thematically as the ripple that’s going out from Fortnite? You also mentioned VR. What’s happened to the promise of VR?

Gallagher: Very quickly, the battle royale theme or genre of games—you can see the benefits of competition. There are going to be lots of choices for gamers to have similar gameplay. That’s been the history of our industry, by the way. Every time there’s a breakthrough, others come in and say, “We can do it better.” That genre of gameplay—you’ve already heard the releases that reflect that.

VR is continuing to grow, but as John Riccitiello points out, it was always going to have a different growth path than the irrational exuberance attached to it early. VR, AR, and MR all continue to be on paths of development. They launched in our industry, but their full potential will be in others. When you see it permeate the economy, whether it’s in architecture, health care, education, or other applications—you’re seeing innovations in the hardware and improvements in the experience. Those will lead to very interesting places for gamers and for the larger economy.

Question: Can you find a way to get more indie developers into E3?

Gallagher: When you have 200 exhibitors—I don’t know what the definition of “indie” is exactly, but we have incredible talent coming in. We also see every platform not just open, but soliciting and seeking indie development on their platform. That’s the same approach we take as E3, to say that all companies are welcome. We’re constantly looking to design the interface for the show so that indies can have a presence. The door is open for us to not only have them in, but to listen for ways to do it better. We do hear. We’ll continue to make those upgrades and changes. But they’re highly welcome.

Question: On the fan conversation, bringing in consumers, how do you see this changing E3 over time? Do you think this will become more of a fan fest? Microsoft is already calling that. You have EA Play. It seems like the path to success here is bringing in more consumers, and I’m not going to say less media or whatever, but making the show much more diverse in that way.

Gallagher: We did it for the first time. We took the leap last year. The feedback was incredibly positive, from exhibitors and from the gamer consumers that joined us. That’s why we’re doing it again this year. The building itself imposes limits on how many we can have. One board member last year said, “At one point Tuesday afternoon last year, it seemed like we were one hand clap away from a riot.” The show was full. We know our limits.

As you know, from years of having this discussion, the L.A. Convention Center is going to go through an evolution. It has to do that. Our industry is bursting the seams of the present construct. The new vision they’ve released just a couple of weeks ago – there was an article in the Los Angeles Times that laid out what the format could look like – gives us a much bigger footprint to accommodate exhibitors and consumers. That’s the space element. That needs to change and grow before we can do more than we have. The development around that you see here – all the cranes, the hotels – that’s helping as well. Those are additional places for the industry to deploy and have a connection with media and analysts, as well as with gamers.

Time is the other element. If we were going to have separate show days for consumers, which has been suggested—we’re well aware of how other shows are constructed. That requires access over the weekend. Our show dates that we have reserved don’t include that access at this point, but we’re working with Los Angeles and with AEG to expand that. If we were able to do that, we could accommodate with more consumers. Space and time impact E3.

We see the evolution, and consumer engagement is a super positive part of that. Some of this is symbolic. We have 2.6 billion gamers. They live vicariously the 15,000 that are here. Symbolically, it means a lot that we’re open to allowing them in, even to those who are not here. 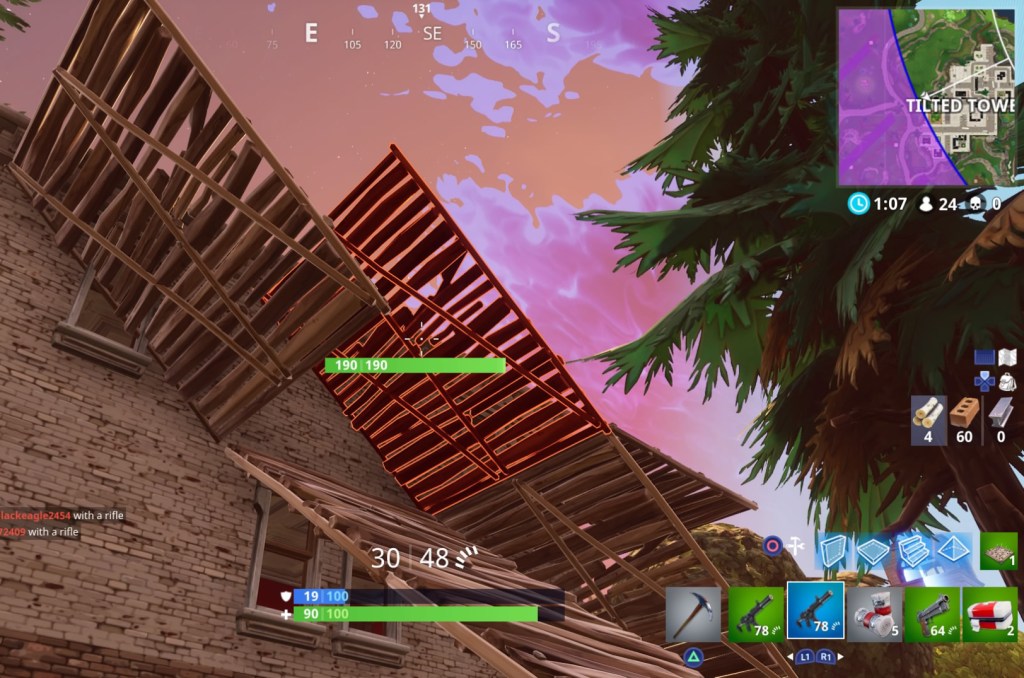 Above: Fortnite — the biggest thing in gaming this year.

Question: What’s the wishlist idea, though? How big do you see this possibly becoming, in terms of bringing in more people? I think of San Diego Comic-Con, way more than just what PAX does.

Gallagher: I went to PAX and Comic-Con last year, just to have hands on and see how they do. There are certain parts of that that we won’t reach or seek because the shows have a different purpose. On the other hand, there are things we’re learning from. We attend those shows and work with the organizers of those shows so that we can share that information. That evolution is going to become clearer once we have a different footprint here in Los Angeles. Once that’s known I can tell you what the vision is.

Question: That’s going to be 10 years from now, though, right?

Gallagher: No, no. They’re talking about having this done by 2020. It’s soon. But again, we’ve had this conversation with them for seven or eight years. Each year we come in and say, “Hotels, hotels, hotels.” That’s getting better. There are more. The other one is, “Upgrade the building.” Other facilities around the country are state of the art and give us an enormous canvas to paint on.