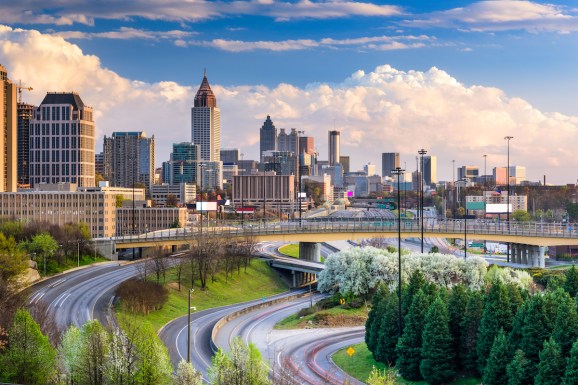 It seems like every city is searching for its niche as the “Silicon Valley of…” But what cities may not immediately realize is that rather than trying to emulate the very specific and unique Silicon Valley culture, they might be better served to use what they’re already good at to bolster their tech cred.

Take Atlanta. The “City Too Busy to Hate” has deep roots in civil rights, Southern food, and in not just following or amplifying, but creating contemporary pop culture. It’s probably best known as a center of innovation for classic and modern hip-hop. Its history as an Olympic host city also lends itself to a rich sports legacy, and the brand-new Atlanta United soccer club quieted detractors when the team broke Major League Soccer records for highest average season attendance.

Perhaps most notable as of late has been Atlanta’s burgeoning dominance in the film industry, largely thanks to tax credits put in place to spur economic growth. In 2016, Georgia was the center of production for more of that year’s 100 highest-performing feature films than London and Los Angeles.

Those tax credits have an impact on more than just the movie industry — production incentives, which provide up to 30 percent of expenditures in transferable tax credits, also apply to television, animation production, and digital media such as esports. This year, the Georgia Music Investment Act went into effect to provide for an income tax credit of up to 20 percent of a music production company’s production expenditures.

Atlanta has proved its dominance as a culture hub. Meanwhile, the metro is also rising in the ranks of growing tech sectors. Traditionally strong in industries like SaaS, health IT, cybersecurity, and fintech, a number of signs lately point to Atlanta’s emergence in new fields where culture and tech collide.

Musical talent has been oozing out of Atlanta’s neighborhoods for decades, from Outkast and Goodie Mob in the ’90s to the current crew of Migos and 21 Savage. The music tech scene has recently begun to gain a foothold, as well.

On the startup front, homegrown companies like Spinrilla, which claims to be the largest independent hip-hop streaming platform in the world, have found the proximity to their fanbase to be critical. Spinrilla caters to the young, hungry, up-and-coming rappers for whom Atlanta is not only a mecca but a home base. The company invests in their artists, recently launching a marketing campaign called “Why ATL” promoting local musicians accompanied by exclusive music releases on the app.

What’s missing, so far, for local startups to grow? Though Spinrilla has managed to bootstrap its way to a huge number of users — founder Dylan Copeland says they have taken no outside funding and have been profitable for five years — a lack of capital may hamper others who need more help upfront. Atlanta is a challenging venture capital market, and institutional funding tends to go to the established tech verticals.

One potentially game-changing option would be to open a music tech-specific accelerator, akin to Techstars Music in Los Angeles. Such a program could help attract both founders and interested investors to Atlanta.

Another avenue for growth is for established companies to invest in the local scene. Pandora recently opened a new product and engineering center in Atlanta, a major acknowledgment of the city’s potential. While there’s no doubt that lower rents and a cheaper workforce than its Oakland, California headquarters played a role, Pandora officials also acknowledged the deep musical roots of Atlanta played a factor.

“We’re excited because this is a hardcore music city,” Pandora’s chief product officer Chris Phillips said at a company-sponsored hiring event. “We want to contribute to that.” Company officials indicated enthusiasm about getting involved with startup events and tech-focused community groups.

Sports tech is a broad category, encompassing everything from digital media to AR/VR to data analytics.

Atlanta’s sports teams have gained accolades for being tech-friendly. In 2016 both the MLB Braves and the NBA Hawks ranked on SportTechie’s first list of the top 25 most tech-savvy sports teams (number six and number four, respectively).

Though Atlanta-based teams have not (yet) taken the step of hosting their own startup accelerators, like the LA Dodgers and Philadelphia 76ers, management is keen to work with local startups. The Braves host an annual hackathon, and the organization recently launched a pilot program with an augmented reality startup to integrate AR within the mixed-use development where its stadium is housed.

And, as of last month, a global sports tech startup platforms is now embedded in Atlanta. Germany-based LeAD (which stands for Legacy of Adi Dassler) announced a partnership with an Atlanta-based startup accelerator backed by Comcast NBCUniversal.

LeAD, founded by the grandsons of the Adidas brand founder, hosts an accelerator program and has raised a $50 million venture fund solely focused on sports tech. The three-year strategic partnership between the two accelerators is still somewhat vague, but they plan to share resources, mentor networks, and corporate and investor connections.

The managing director of the Comcast accelerator (dubbed The Farm), Burunda Prince-Jones, anticipates that sports-focused startups going through their program will be able to magnify their chances of success due to the relationship with LeAD. Comcast executives brought up the potential for co-hosted programs or shared demo days.

This activity in sports tech comes as Atlanta ramps up to host the upcoming Super Bowl LIII  in 2019. With preparations by the city and local businesses already underway, it remains to be seen if the tech scene will manage to capitalize on the national attention and influx of sports enthusiasts.

Atlanta, named as one of the best cities for gamers in a recent WalletHub study, is already central to the industry — partially thanks to those generous digital entertainment tax credits that have spawned a high concentration of gaming studios.

For example, Hi-Rez Studios, developer of the extremely popular SMITE and Paladins games, counts a community over 45 million strong and recently opened a new esports production company. Atlanta-based media giant Turner became invested in esports with the 2016 launch of Eleague, which broadcasts on TBS, Twitch, and YouTube.

Talent is in high demand to feed the growing industry, and Atlanta-area universities are stepping up. From its campus in the heart of downtown, Georgia State University enrolled 350 students in the first year of an esports program to prepare for careers such as broadcasting/live commentating, tournament planning, and video game social media/marketing. Savannah College of Arts and Design (SCAD) funnels hundreds of students each year through its popular game design degree.

What else is needed to continue nurturing Atlanta’s dominance in gaming? Continued encouragement and support from local officials. The international gaming community has already begun to recognize the city’s leadership, as evidenced by the choice of Atlanta as the U.S. home of DreamHack, the world’s largest digital festival. Following the inaugural U.S. festival last year, DreamHack has set dates for the 2018 event (November 16-18), which will draw gamers from all over the world.

As esports grows in terms of job roles, sponsorship, and advertising dollars and revenue, Atlanta’s policy environment and talent will position it to be a dominant player in the market.

A perfect storm of factors

In the competitive global market, cities have to market themselves just as much as any brand in order to attract business and talent. Becoming known as a leader in the technology products and services that enable popular culture will position Atlanta’s currently second-tier tech market for international attention, venture capital dollars, and talent. It could move the needle to boost the city from the “next big tech hub,” as it’s so often named, to a true tech leader.