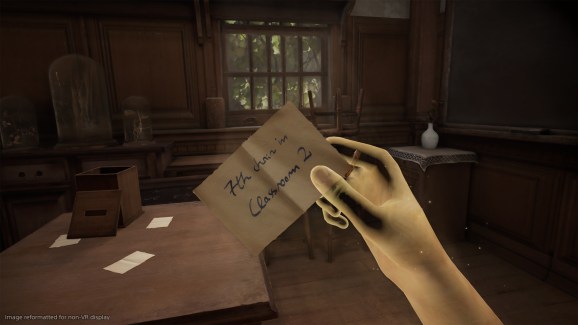 If you told me a week ago that From Software, the legendary developer behind the Dark Souls series and Bloodborne were making a PSVR game I’d absolutely expect it to be one of the highlighted announcement’s as Sony’s annual E3 press conference. Unfortunately, it wasn’t even mentioned, but it does exist. That From Software VR game is called Déraciné.

Sony showed the trailer during the stream, but the actual conference itself didn’t get a single whiff of PSVR news. In fact, I talked to several people the following day that didn’t even know this game existed. I’m not sure what Sony was thinking with that strategy, but here we are.

Luckily, I’ve played Déraciné, and I can confirm that not only does it exist, but it’s also absolutely beautiful.

There was a single station for Déraciné at E3. It wasn’t at Sony’s public booth and was only tucked away in a corner of the press-only PlayStation area next to Blood & Truth and a host of other PSVR demos.

My demo started out in a boarding school. According to producers from Sony Interactive Entertainment, you play as an invisible fairy that must intervene in the lives’ of the children at the boarding school to prove your existence. There are lots of heavy themes that deal with life, death, and time, so it’s not exactly the type of game you sit down and play if you don’t want to think.

The producers told me that it’s split into about eight different chapters that each tell a different vignette-esque story about the children at the boarding school. Each chapter will last around an hour, making the entire game about 6-8 hours in length.

Visually everything has a beautiful sepia tone overlay that evokes the feeling you’re traveling back in time. As you explore environments you’ll see that all of the characters are frozen in time, unmoving, even when you get up close and lean in to examine them. By reaching out and interacting with things in the world, such as the flower in the above image, I could alert them to my presence from time to time which would trigger a replay of them doing something or a voice over.

Since Déraciné uses two PlayStation Move controllers, the movement system is a little tricky. You don’t have full, smooth locomotion at all, but instead you look at nodes on the ground and pull the triggers to teleport there. It’s similar to Wilson’s Heart on Oculus Rift, or the upcoming Blood & Truth. For a slow-paced adventure game like Déraciné it works just fine and I never felt like I was missing any part of the experience by not being able to move around at will. Each room had plenty of nodes so I was always able to get to where I wanted to go. It’s reminiscent of From Software’s early work on games like Echo Night.

The next chapter of my demo involved a young girl wanting me to help her play a prank on the rest of the students and adults at the boarding school by putting some herbs into a soup that would, theoretically, make them pass out. What resulted was mostly a scavenger hunt as I searched for herb vials (the chef was wearing one around his neck, for example, and another girl was putting it on her dog’s collar at one point.)

Mechanically, Déraciné isn’t doing anything that remarkable, but the visual style and attention to detail in the world is just a treat to explore. I’m excited to learn more about this world and really dig into the thoughtful, esoteric narrative.

Déraciné is about as far away from Dark Souls VR as you can get, but it sold me on its premise and I can’t wait to see more. It doesn’t have a release date yet, but Sony has said it’s coming this year.