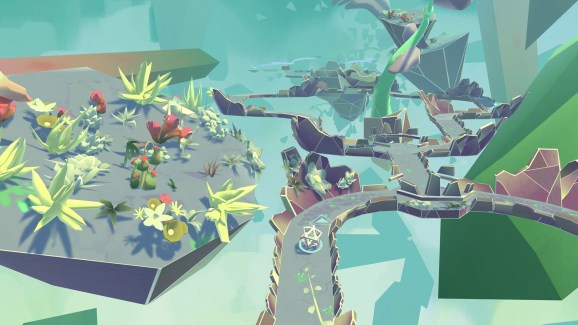 Arca’s Path gently guides you through an alien world full of soft colors and exotic plants — and you’ll never have to pick up a gamepad or controller. It’s a virtual reality platformer that you control with just your headset, and developer Dream Reality Interactive and publisher Rebellion plan to release it later this year on Oculus Rift, Oculus Go, Samsung Gear VR, and PlayStation VR.

At the Electronic Entertainment Expo trade show last week, I donned a PSVR headset to try the demo. After crash-landing on the planet Arca, the nameless protagonist begins her journey through a lush low-poly world. She’s represented by a little ball, which I controlled by using my headset to point a cursor at where I wanted her to move. Each level resembled a roller coaster, with a single track winding through with dips and turns that could get a little tricky if I moved too quickly.

Dream Reality Interactive’s creative lead Albert Bentall says that the studio decided to go with gaze-based controls because it would make it easier to port the game to several different platforms. Because players only use the headset, the team didn’t have to consider the difference between the Oculus Touch controllers versus a gamepad, for instance. Accessibility was also another consideration.

“But also, when you don’t have to give someone a controller, there’s not as much to learn. You can give it to someone who’s not a traditional gamer and they’ll pick it up as quickly as someone who knows exactly which button is where on a PS4,” said Bentall in an interview with GamesBeat. “There’s none of that mashing around, knocking things off your desk trying to feel where you left the controller. You just put the headset on and you can play the whole thing without ever picking one up if you want to.”

Arca’s Path is all about accessibility. It has bright inviting graphics and a beautiful world that pops into view, unfolding like colorful origami before your eyes as you navigate its mazes. If you fall off the track, you can start up where you left off. Each level is designed to be fairly quick — Bentall says that when he plays, it typically takes him two to three minutes for shorter levels while the longer ones can last around six or seven.

In later levels, the environment becomes more challenging, incorporating obstacles like moving parts and trap doors. However, the ball always stays the same and players won’t have to worry about learning new controls. They just have to focus on moving forward and navigating their way to the end of the course.

“If we put things all around the player, there’s a lot of turning around craning your neck backward. Once you look behind yourself to shoot some monster a few times, you get a bit— ‘OK, I don’t want to have to keep turning around,'” said Bentall. “So we put everything in front of the player. You’re typically moving forwards. It felt like that made it more comfortable and more palatable to more players. There’s less people saying, I’m tired now and I want to take it off.”

Dream Reality Interactive had to keep this all in mind while designing the levels. In one of the two levels I played at E3, I was guiding the ball down a long twisty slide, which took up most of my field of vision and made it feel like my chin was resting on the ground. This didn’t feel unpleasant, but it did take me by surprise.

“That was something we had to be quite careful with in terms of the level design. If we went too steep, your face would be going through the floor basically,” said Bentall. “We had to say, OK—we ended up making all of these different kit parts. We know we’ve tested all of these out in all different sorts of configurations. All of these things are going to work and be pretty comfortable for the player.”

In addition to designing each part of the levels in a modular kind of way, the studio also had to be careful about layering the tracks on top of each other and make sure that nothing blocks the players’ view of what they’re doing.

I’m not sure how challenging Arca’s Path gets, but I found the demo to be a relaxing experience. The gaze-based controls are easy to get used to, though I wish I had more time to look at my surroundings without accidentally moving the ball around. Occasionally, I found myself on a platform and could safely take in the game’s sights. And when I did, I enjoyed diving into its pretty, pastel world.