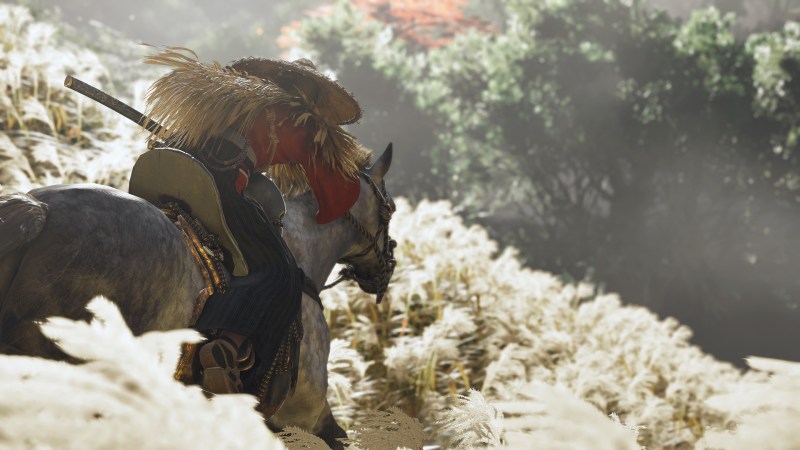 Above: The fauna sways in the wind in Ghost of Tsushima.

Question: Is there a point where you had to make a pitch and say, “Trust us with this?”

Zimmerman: We were worried about that. When we got started, we were super excited about this. I’m super excited about doing this game. I remember when we were talking about it and said, “This all lines up. The Mongol invasion, Tsushima, it’s perfect.” There’s such a rich story to tell here. We were so excited about telling that story that we were just vibrating. Will we be allowed to do this? Despite all the work we’re able to do, we’re still an American studio. Is this going to be okay with Sony as a greater corporate entity?

It was really surprising and gratifying to hear that the answer was yes, that Sony was excited about doing this. When we did the trailer we showed last fall at the Paris game show, we did it in Japanese and put it out in Japan, and it got a zillion views. People were excited about it. They don’t think we’re going to make the same game that a Japanese studio would make about this time period, and that’s okay. We’re going to tell a story that we hope is universal, that everyone can relate to, that’s our take on this time and place. We hope we can take people back there, and I think we’ve been relatively successful so far. Fingers crossed that we can pull it off all the way.

Question: You said you’re running this live. Is the game going to be completely without a HUD?

Zimmerman: We take the HUD off for things like this because it’s distracting. If I put the HUD up during this everybody just wonders, “What does that thing mean? What does this thing mean?” You don’t really need to care about that right now. It’s light, but there is some HUD. There are things we could do without a HUD, but realistically, sometimes the best answer is to be able to say, “Here’s your objective,” and put that text on the screen instead of assuming you can infer that. So, HUD-less, no. Light HUD, yes.

Question: The moments where you could stop, is that just a developer option?

Zimmerman: It’s funny. Obviously we’ve been working on this for a long time. We were trying to work through how we’re going to do these demos. How are we going to talk? We knew we were going to play it live, but fundamentally, we want to get something new across with these demos, so how can we talk about it? We thought, “If only we had some feature that would let us stop and look around,” and we realized we did: the photo mode we used for Second Son. We thought, “Okay, let’s just turn on photo mode,” and that’s what you’re seeing.

Question: When you’re showing the world and the weather system, is that weather going to be dynamic? 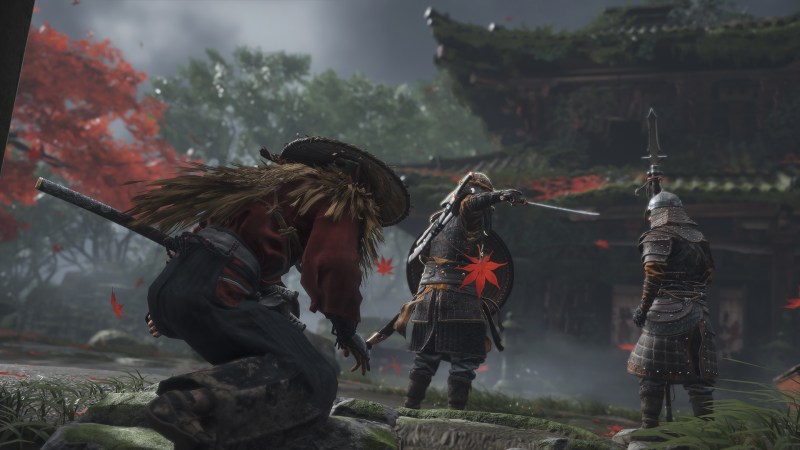 Above: Stealth combat in Ghost of Tsushima.

Question: The demo is voice acted in Japanese. Does that Japanese voice acting have its own matching lip sync?

Zimmerman: We haven’t decided exactly what we’re going to do. The fact that it’s in Japanese now, although it represents our vision for the game, it’s sort of a development miracle that we could make that happen for E3, because this stuff doesn’t get wrapped until not that long ago, and then it has to make a round trip to get acted and re-integrated. The guys worked really hard to make sure that we could show the game we’re building – one where, if you want to play it in Japanese, you should be able to play it in Japanese.

We’ll see what the results are. It’s important to us that the Japanese version feels natural. We have some extraordinarily skilled people involved. If they’re good enough at the dubbing process, then we may be able to not have to do that. But time will tell.

Zimmerman: We’re not talking about details, but you’re in the right ballpark. This is an open world game. I think the expectations that you have about what a great open world game is, those are our expectations as well. We’ll see. The game’s in process. We’re not done. Obviously it’s playable here, and it’s playable on a larger scale. We’re doing playtests every six weeks. This is not shallow. This is just us showing a part of something that’s pretty broad and deep.

That said, until you have it all done, some of the questions you’re asking can’t be answered. We don’t know exactly—were the game to have anything like crafting in it, you really don’t know how you’re going to be able to do something like that and how it will all fit together until you’re actually in the middle of hour 20 of a 40-hour playthrough. All numbers are estimates until you know how it feels in the large. You just don’t know. I could give you answers, but who knows what’s going to change between now and the finish?

Question: Do you see any comparison to For Honor, as another sword fighting game?

Zimmerman: It’s going to sound like a weak answer, but we really don’t compare ourselves to other games. That’s not how we think. Sometimes we’re inspired by other games, but we don’t think of ourselves that way. We don’t make decisions that way. We try to identify what it is that we want to accomplish, and usually that’s what drives our decisions. We don’t look at—obviously we’re all gamers, so we play games, but we don’t try to define our game in terms of other games.

If you ask me what our influences were, sometimes there will be a bit or a piece from something else, a detail from some other game that we were inspired by. We’d be dumb not to take the best ideas from other games. But when you watch the demo, hopefully you’re getting the sense of being in a samurai movie, rather than thinking it looks like Dark Souls or whatever. I hope that’s what comes across. 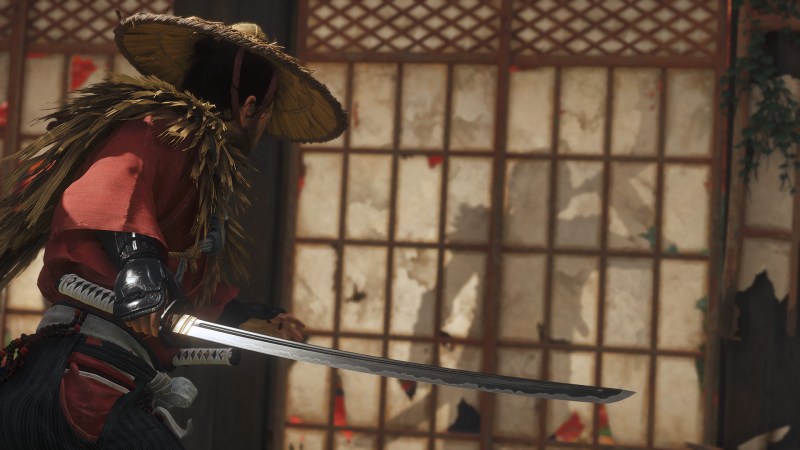 Above: Jin tries to stop an alarm by stabbing a guard through a paper door.

Question: You talked about being authentic to a time and place, but you also showed the concept of how Jin’s samurai training is not enough and so on. Does that kind of conflict there?

Zimmerman: I hope it does, right? That conflict is actually the heart of the story we’re telling. Jin’s story is about someone who has to sacrifice everything that he’s always wanted to be in order to become something that he has to be. It’s about him living by this code he’s been taught, hundreds of years of important knowledge passed down from father to son. That’s his world. He defines himself by what he’s learned. Then he’s forced into a position where that’s not enough.

So yeah, there’s absolutely conflict. We want you to feel that, to look at what he does in the demo and think, “I see some samurai there, but that part doesn’t look like samurai at all.” This is capturing a point in evolution from being pure samurai to something more than that.

Question: But is there any worry that people will read this as just taking liberties?

Zimmerman: It’ll be interesting to see. Some part of me says I hope the answer is yes, because that is the story they’re telling. If they feel conflict, they’ll maybe be able to feel Jin’s conflict, because he is conflicted in exactly that way. In terms of whether we’re treating it respectfully or not, we really do count on the team of people that we’ve assembled around us to make sure that our own instincts are on the mark. Our Japanese producers, if we do something that doesn’t feel right, they will tell us, and they do tell us.