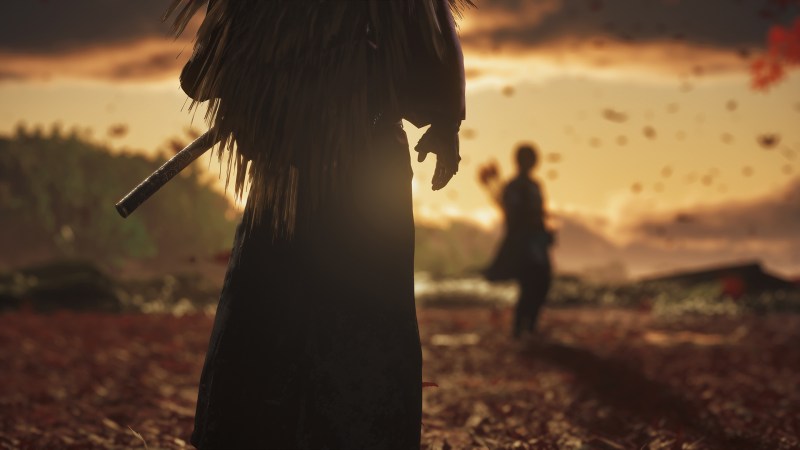 Question: Can you give an example of that?

Zimmerman: The one that’s fresh in my mind—the move he does, the first time you see him take the katana out of the scabbard, that’s called iaijutsu. It’s this whole fighting style around attacking from a sheathed weapon. It has a crazy lineage. There are still people studying it down 20 generations. It’s important that—this is a real thing. We were careful about exactly how that would work. Practically speaking, if you were doing that, how would you do that? If you look at it, it’s one motion, and it’s ending up. Mechanically, that’s what works. We did it differently in earlier prototypes, and the experts said, “No, that’s not right. You gotta fix that.”

Even though our instincts have usually been pretty close, getting the details right is super important. They’re not going to matter extraordinarily. Most people just say, “Whatever.” Would I have even noticed, as a guy who’s a big consumer of samurai stuff? Maybe? But it’s going to hit for somebody. Making sure that we get the details right, and the people that know—they’re going to notice things like, “Oh, that’s not modern kanji, that’s 13th-century kanji.” They’ll appreciate the fact that we have a dialogue coach on stage so that the Japanese actors are using correct phrasing for 13th-century Japanese.

Question: Having seen a lot of samurai movies–

Zimmerman: 13 Assassins is mine.

Question: There’s a wide variety in the way they fight in these movies. Is this a master duelist kind of fighting that we see here, or more like a battle, a melee kind of fighting?

Zimmerman: It’s interesting. The fighting system spans that whole gamut. In the demo, you saw a one-on-one fight, an iconic duel. You saw him fight a few guys. There will be times when you’ll be fighting an even larger group. Your abilities don’t change across those things. It’s the same set of moves, the same combat system that you’ve learned and invented across that whole range of situations. It has to work everywhere. The thing that changes is the enemies and the degree of challenge they represent. Masuko, if I go in and fight that fight for real, it’s not something where I go in and, bing bang boom, she’s dead. That’s actually a challenge.

It isn’t about fighting in a large battle or fighting in a duel. It’s both, all of the above. We need to make sure that when we’re working on this with our ancient fighting experts, we come up with a style that has some basis in reality, but works against these different settings and works given what you need out of a game.

When we showed you this stuff, did it feel believable? Yeah? That’s what we’re aiming for. This isn’t a game about magic spells. It’s about this grounded reality, a real person in a real place and time and how he deals with it? There really isn’t anything in the game where you’ll think, “A person couldn’t do that.” It’s not even to the level of wuxia wire-work stuff. It’s much more grounded than that. For me 13 Assassins is a great touchstone, the recent version. There’s some stuff that’s a little bit fanciful, but fundamentally it’s dudes with swords. It’s not magic powers. No 20-foot judo demons. 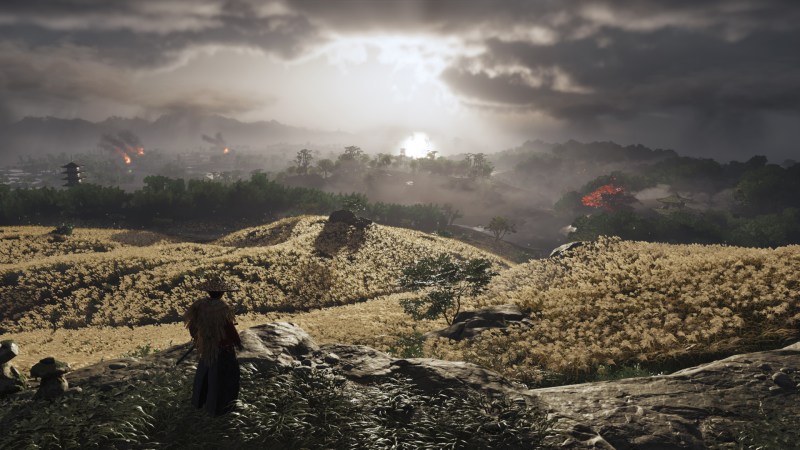 Above: The island of Tsushima is under attack from the Mongols.

Question: You said in the demo that it’s not just about Jin, but about the story of the island. Do your decisions affect how other things happen, whether you’ll ally with different people, things like that?

Zimmerman: We’re still working on that. Having come from 10 years of working on a game that was just about choice, we know what that means. We have not committed to a direction. I think we have to decide what’s the best way to tell the story we’re telling and how player agency is reflected. There are lots of ways to have player agency over things, as anyone who’s spent $80 on a 3D-printed statue of their World of Warcraft avatar will say. That’s agency, a very specific example. I have not done that, by the way.

But there are lots of different ways to have agency. Agency over the plot is one of those ways. We know what that feels like. We need to decide whether that’s the kind of agency we want to have in the game. I wouldn’t say we’re leaning one way or the other at this point.

Question: When you say you’re trying to make it universal, what do you think might be the differences between a Japanese fan and an American fan reacting to this game?

Zimmerman: I’m not Japanese, obviously. You probably picked that up. I think that some of it is more emotional for a Japanese player. They see something that’s—I grew up in Indiana, in the middle of a cornfield. If I see a picture of a cornfield—unless you grew up in the middle of a cornfield, it doesn’t hit you in the same way that it hits me. I think that’s one of the differences. When we work hard on something like this, or the temple, and we get it right, it hits people differently if you’re Japanese. This is your culture. This is home.

Again, that’s why it’s so important for us to get it right. That’s responsibility. You’re taking something that’s a person’s sense of who they are. You can’t screw that up. The game we’re making, we’re super excited about it, and we hope other people are excited about it, but no game is all things to all people. We think it’s going to have a lot of appeal, but if someone really wants a 20-foot-tall oni, that’s not what we’re doing. We’re not the only game in the world, and that’s fine.

Question: When you say it’s an open world experience, how do you avoid the problem of a lot of empty space, being able to get lost and not know what to do next?

Inside baseball: it turns out that you need to hit the right density of stuff in the environment. If you’re in a game where it’s just big for bigness’ sake, that’s not good. You get bored. We’ve played games like that, where they’re big, but kind of empty. We’re much more focused on quality of experience. That’s a challenge for us, making sure that we have the scale that people realistically expect from an open world game, but at the quality of experience that we expect of ourselves, and that anybody in the know expects of a Sucker Punch game.

It’s important that you always feel like you see some interesting things. You kind of saw that here. When you’re going through, you crest that hill and it’s gorgeous, but you also see a temple. You see a fire in the distance. You see some ships. You can always see something interesting.

As a result, when we have people play the game, they’re not just going to the next waypoint on the map. In a good open world game, you have super high distractability. No matter what you thought you were going to do, you end up spending three times as much time on it, because you get intrigued about this thing you saw. There are lots of ways for us to introduce those things into the game. We have a bazillion of them. We’re just not showing them yet.