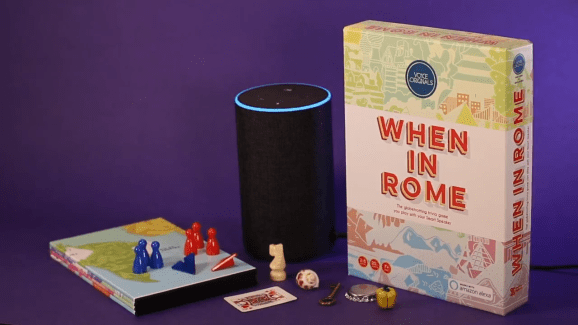 When in Rome board game with Alexa

Sensible Object today announced it has raised $3.2 million to grow its experiences that combine Alexa with board games.

The company’s first game, When in Rome, will go on sale July 2 on Amazon in Australia, Canada, the United States, and the United Kingdom. When in Rome launches exclusively for Alexa but will be made available in Q1 2019 for Google Assistant, CEO Alex Fleetwood told VentureBeat in a phone interview.

When in Rome is a multiplayer game that uses Alexa as your guide and provider of a multimedia experience. The game introduces players to locals in cities around the world through trivia questions and was created with the help of a team of creatives that includes writers, composers, and theater directors who managed the dialogue of local voice actors. The experience, which visits 20 cities, can be tried for free by speaking with the When in Rome Alexa skill.

A new package of characters and content will be available for download later this year — this one is geared toward adults and takes people into the nightlife of the cities featured in the game.

“When you think about having an amazing night out in a city, you don’t know the people you [will] meet, the kind of things that might happen. It goes into that kind of territory and brings some interesting ideas into the game,” Fleetwood said. “We’re working on music licensing for the game with local artists. So, for example, how do you bring the authentic sounds of contemporary Nairobi into the game, how can we bring that to life?”

Instead of the typical board game that remains an unaltered, static experience, Sensible Object is using Alexa as a way to provide an interactive experience, one that keeps people coming back through consistent updates and improvements.

Investors in the $3.2 million round include London Venture Partners, NCSOFT, March Capital, and Alexa Fund — a $200 million initiative by Amazon to support promising startups that are growing the ecosystem of products and services that work with virtual assistants.

Last fall, Sensible Object debuted When in Rome at the Demo Day for the inaugural Alexa Accelerator, a startup program hosted by TechStars in Seattle and paid for by the Alexa Fund. When in Rome is the first in a series of board games — called Voice Originals — to come from Sensible Object and place a smart speaker at the center of the experience. Three additional Voice Originals will be released in 2019, Fleetwood said.

Alexa playing a part in games was the butt of a joke last week at the E3 gaming conference, but in addition to Voice Originals from Sensible Object, Alexa can act as an in-game assistant for players of Destiny 2.

A series of voice apps that are free to download from the Alexa Skills Store has also been introduced for play with Echo Buttons.

While the initial Voice Originals will be made by Sensible Object, the company plans to make its toolkit for creating board games with virtual assistants like Alexa and Google Assistant available to third-party creatives.

“One of the uses of invested capital is to kind of keep building out those tools,” he said. “We’re really excited about this because it plays into a strategy for Sensible Object of unbundling the box game.”

Based in London, Sensible Object currently has 25 employees. The company has raised $5 million since it was launched in 2016.