I’ve played the multiplayer combat of Call of Duty: Black Ops 4 a couple of times, and it takes a little getting used to. But Activision’s Treyarch studio believes it won’t take long for players to get accustomed to the differences in controls for the latest installment of Call of Duty coming this fall.

Black Ops 4 won’t have a single-player campaign, but it will have multiplayer, three Zombies episodes, and a new battle royale map dubbed Blackout. I played the game at the Electronic Entertainment Expo (E3) in Los Angeles, and then I interviewed senior producer Yael Miller and gameplay designer Matt Scronce of Treyarch.

How the game plays matters as it will determine whether the game will hold its own this fall against competitors like Battlefield V, PlayerUnknown’s Battlegrounds, and Fortnite.

We talked about what it’s like to play with the new health system and how players have to guess what’s happening during a head-on stand-off in order to get the jump on another player during a match. 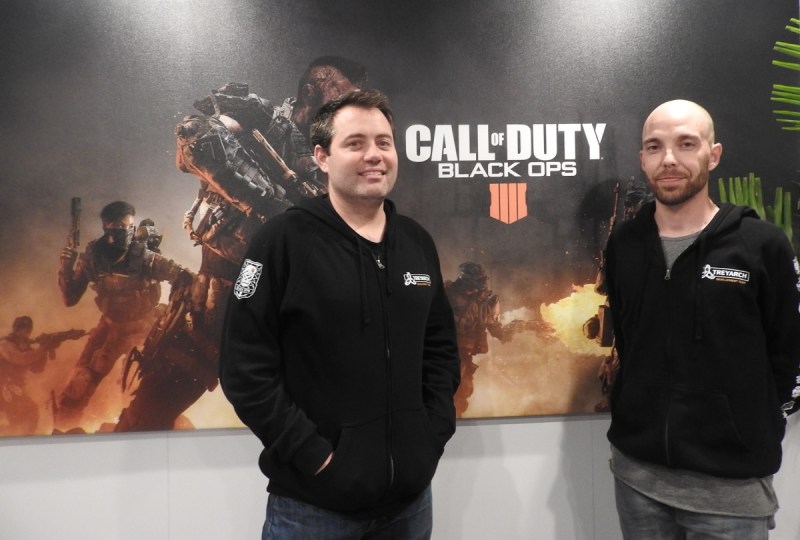 Above: Yael Miller (left) and Matt Scronce of Treyarch talk about Call of Duty: Black Ops 4.

GamesBeat: I think I’m getting a little bit better. I played at the reveal and I played here. It feels very familiar to me, the ability to get things done. The health factor seems like the hardest thing to remember.

Matt Scronce: It’s different, but we felt it was better at — when I go play games now I’m always accidentally throwing grenades because it’s built into my muscle memory. The health is one of those things where we tore everything down in the desire to make a more tactical Call of Duty experience. We obviously looked at the health model, and with the new health model, the increased health to 150 and the manual health regen, it’s one of those things that provides more tools to allow the player to feel clever.

One of the examples I’ve run into a lot in our playtesting — you have your classic cover to cover Call of Duty battle, your gunfight there. You trade a couple of shots. I take more damage, so I need to take cover. Now he has a decision to make. What does he think I’m doing? Am I manually healing now? I don’t have to wait five or six seconds like I did in past games. Now I can be clever and guess what he thinks I’m thinking. If he thinks I’m healing, nope, I can pop right back out and catch him by surprise. It’s one of those things that can further drive the tactical experience.

GamesBeat: It feels like there are more shootouts happening that way. You’re not just getting the drop on somebody by going vertical.

Scronce: That’s great. In Black Ops 3 we loved the thrust jump and wall-running. I was the lead design on core movement there and in Black Ops 4. But we really want those head-on battles and engagements, that dance that happens in Call of Duty with the gunfights. With the increased health, players can survive a bit longer, get into engagements that are a bit longer. For more casual players, where you feel like you always get melted, that’s not going to happen. You’ll have more opportunities to react to something or get behind cover.

Yale Miller: It also drives a bigger importance on working as a team. You get in those longer engagements, but those engagements change more over time. You start an engagement and your friends roll up alongside. That changes the engagement. Their friends roll up likewise. If the health model was the same, it would just be all over too soon. Some of the boost stuff would change that a bit more. Now the decisions you make are more meaningful because you can’t just choose to jump out of there. 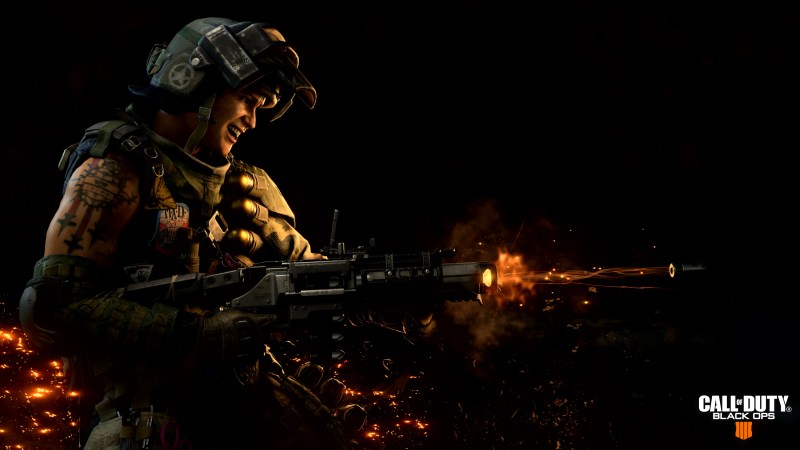 GamesBeat: I noticed at the end that the K/D (kill-death ratio) isn’t as obvious there on the match results.

Scronce: For Black Ops 4 that’s something we took a look at. In the past it’s been all about slaying, about how good you are with a gun, but in Black Ops 4 that’s not actually always the case, because there’s so much to this game than just using your gun. That’s still a very important part. You can still go out there and be the lone wolf if you want to. But with our specialists and the tactical experience we’ve tried to craft, it’s more about score now.

Everything you do in the game is going to reward you with score, whether it’s killing an enemy or healing your teammates. We have Crash, who’s our support character. He can heal and lay down an assault pack and provide ammunition for his teammates. If I lay down that pack and then my teammate takes the ammo and gets a kill, I’ll get score for that. If I heal my teammate and he goes out and kills three enemies, I’ll get score for all three of those kills. That spans the multiplayer universe and everything we’re doing.

Miller: We’re looking at score in different ways as well. In the past, even if I did 95 percent of the damage on someone, but Matt got the last tick of damage, he was rewarded with the kill and I just got an assist. Now we’re looking at — if anyone did damage on him, you get an EKIA. We’re also taking that a step further for the hardcore who wants to say, “No, but I did more damage.” We’re calculating damage dealt. It’ll show what percent of the kill you got, and you can look at damage dealt across.

We still want gunplay at the core of Call of Duty. You can still — different modes will bubble up different scores for different things. But at its core, it’s about what you’re doing to help the team win, trying to bubble that up to the player.

Scronce: Again, the cooldown, that’s almost ingrained into us internally at this point. On average — we could probably pull the data — fewer grenades are being thrown, but I think that’s because people find so much value in the special issue equipment, the piece of equipment that’s inherent to each specialist. Seraph has her annihilator as a weapon, but her equipment is the tac deploy. She can place this device, and then all of her teammates can spawn on that device.

I’m playing Domination, for example. Do I want a grenade, or do I want to take something that lets us spawn super close to the flag? That speaks to the value that the equipment brings.

Miller: Another thing about the switch, when you would come back with a full stock of grenades with every new life — putting it on a cooldown system also allows us to play with how powerful they are. You may not see as many of them, but maybe they have a bigger boom. These are all still things we’re working on tuning. We can say, “Hey, you’re not getting them very often, but they’re very powerful.” We’re playing with all of these things to make it feel purposeful. It’s fun to use. It feels powerful. But it also doesn’t go to the other end of the spectrum, where it’s just really annoying for other players.

That looks at some of the things we’ve done with pieces of equipment — even the ballistic shield. Every Call of Duty has put in a riot shield. We’ve all tried it. We’ve all done it. But in our old model, where it wasn’t tied to a cooldown and where everyone could take it, if the riot shield was big and very powerful, it would break the game. Everyone would use it. The community would complain. Now, by tying it to a specialist and putting it on a cooldown, we can do things like — at that moment it’s really powerful, but he doesn’t have a giant flamethrower or some other thing. We’re able to bring things like that in and play with not just how big it is, how many bullets it blocks, but also how long it takes to get it back.

GamesBeat: It seemed like grenades would be useful to dislodge people who are really entrenched. What serves that purpose now?

Scronce: The picture-perfect piece of equipment for that is Firebreak’s reactor core. You press right bumper and he goes down into a third-person pose. It’s a kind of nuclear core, and it will emanate an area of effect that will go through walls. You get that nice interplay where what we like to do—for example, Miller might take Recon, and I don’t know where the enemies are, so we’re trying to take B on Control. He can shoot his sensor dart, which then reveals all the enemies, and I can go straight up to that wall and drop the reactor core. That’s one way to dislodge an enemy really quickly. 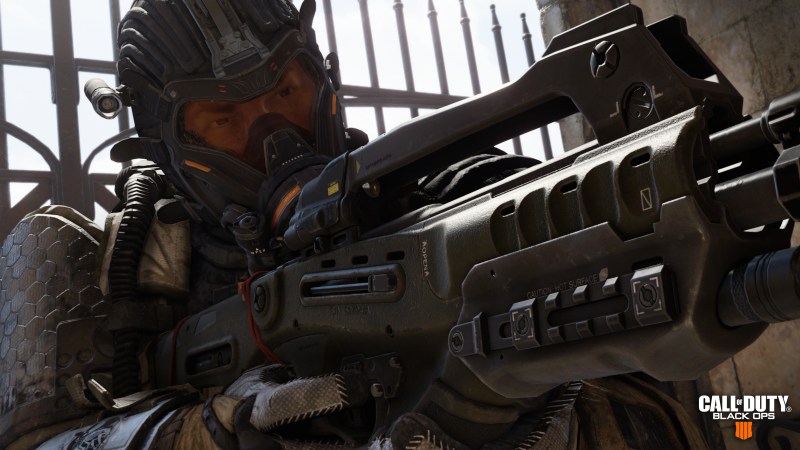 Miller: If you find that people are camping in a sport, if you want that grenade or concussion, we have a character with a nine-bang that you can use, a big flash, or you can just take a regular concussion. You can always choose to swap those things out. We want to give opportunities for that. It also drives — one man throwing the concussion, wrapping around, and wiping them all out, you can still do that if you’re in the right situation. But you can also say, “They’re bunkered down, so let’s roll together. Who has what we need?” Then you work together and do it.

GamesBeat: If I start customizing and swapping things in my loadout, does that change the characters in some ways?

Miller: Certain characters — you’re always going to have your main, your primary. That would be your annihilator. That’s always something that’s tied to the specialist. But the second piece, that piece of equipment that only they have, you can swap that out with your Pick 10. It does change the profile, but that’s part of the thinking. What do we want people to be able to play with? We want them to be central to this, but sometimes different game modes, different team compositions, it just makes sense.

If I’m playing with a team that’s always doing a certain thing, and I want to roll with Seraph, but I don’t really need the tac deploy because we’re playing TDM and the map’s really flowing around on its own – the spawns are good to begin with, so it doesn’t really matter — then I can take another piece of equipment. We want to still give people the opportunity to play that role. We know from watching matches and playing a whole lot ourselves that when teams are playing specific roles and working together, teams are more successful.

Scronce: I will say, though, that it’s a good point that if Seraph doesn’t take her tac deploy — takes a grenade, for example — you’re missing out. We’ve gotten that feedback through user testing and the reveal event. We’re looking at a way to resolve that. We’re still making changes. We’ll get back to the office today and tomorrow and make more changes. Even post-ship, we want this to be the best Black Ops that we can make. We’ll do whatever we can to achieve that.