Epic Games‘ hit game Fortnite has reached yet another milestone on mobile. Since its iOS launch in mid-March, it has generated $100 million in revenue on those devices in 90 days, according to market analyst Sensor Tower. Its presence on mobile will only grow, as the developer plans to roll it out to Android users this summer.

The game is free to play on PC, Xbox One, PlayStation 4, Nintendo Switch, and iOS devices, and Epic makes its revenue from in-game purchases. Fortnite previously passed the $50 million mark in May thanks to new Season 4 content. Hitting the $100 million milestone in 90 days puts it in the top 3 fastest earning mobile games along with Supercell’s Clash Royale and Niantic’s Pokémon Go, which outstrips the competition by reaching $600 million earned in its first 90 days.

Fortnite earned its $100 million in roughly half the time it took other popular mobile games like NetEase’s battle royale Knives Out and Tencent’s titanic multiplayer online battle arena Honor of Kings, which is known as Arena of Valor in the West. Sensor Tower notes that Fortnite’s rival, PUBG Corp.’s PlayerUnknown’s Battlegrounds, has been omitted from this comparison because it has only been monetizing for 60 days, and it has yet to reach $100 million. 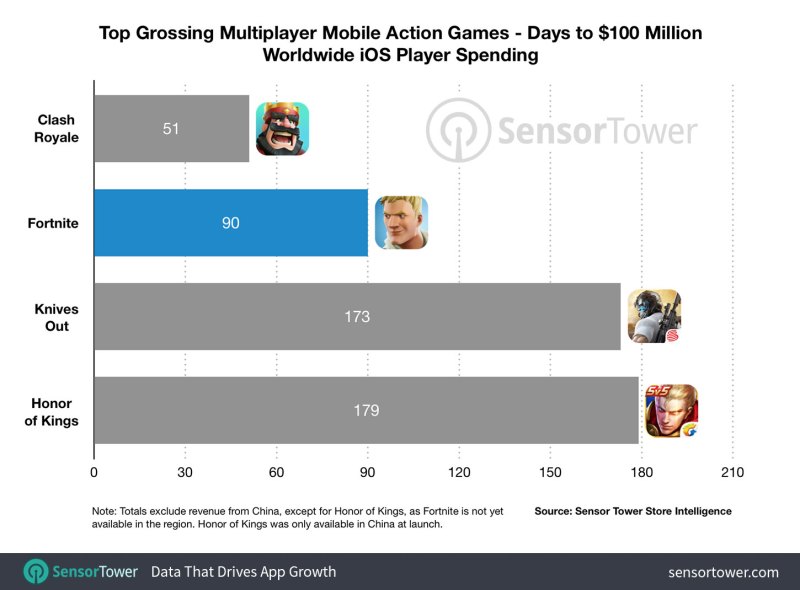 The battle royale juggernaut has been excelling across multiple platforms, recently becoming the biggest free-to-play title on consoles and raking in 2 million downloads within 24 hours of launching on Nintendo’s Switch. Epic is also making a big push to build up an esports scene for its game, investing $100 million into the endeavor.

The only potential fly in Epic’s extremely rich soup is its ongoing legal trouble. PUBG is taking it to court for alleged copyright infringement, and that particular last-player-standing showdown will commence at a later date in South Korean courts.