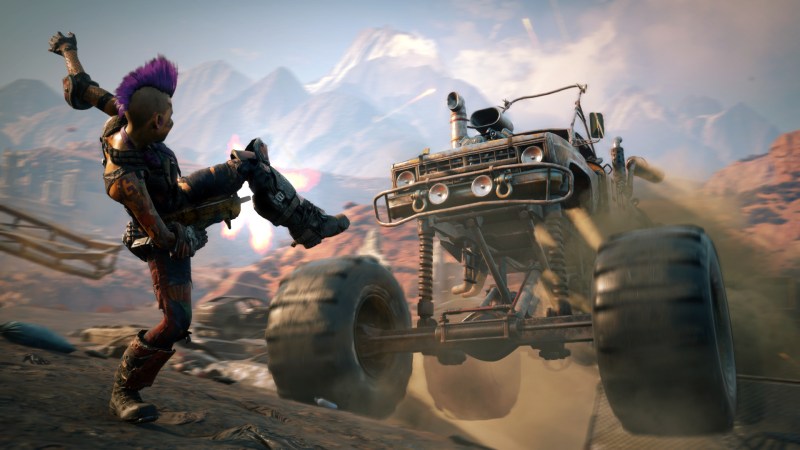 GamesBeat: I don’t remember exactly why, but a fair amount of people were dissatisfied with the first Rage in some way. Did you latch on to any particular things that seemed to need addressing?

Rage 2 delivers on the promise of Rage, where it’s really seamless among all the environments, from racing to combat to walking into a town. There are no loads. It’s that sense of going anywhere, doing anything. If you see a mountaintop, you can walk to the top of it. Once you get past the introduction area of the game, the world opens up. If you want to make a straight line and try to fight the boss, no problem. That makes the difference.

GamesBeat: There’s the challenge of making the story compelling enough to keep you on a path but also give the player some freedom.

Willits: Yes, yes. What we do in Rage 2, we have some key characters that you interact with, when you want to interact with them. Those characters propel the story for you. The activities that you can complete in the world — you spend your rewards from those activities on upgrading yourself, your weapons, and your vehicles. Then you work with these key NPCs to push the game forward. But you can go to any of those people any time. It’s a non-linear story. 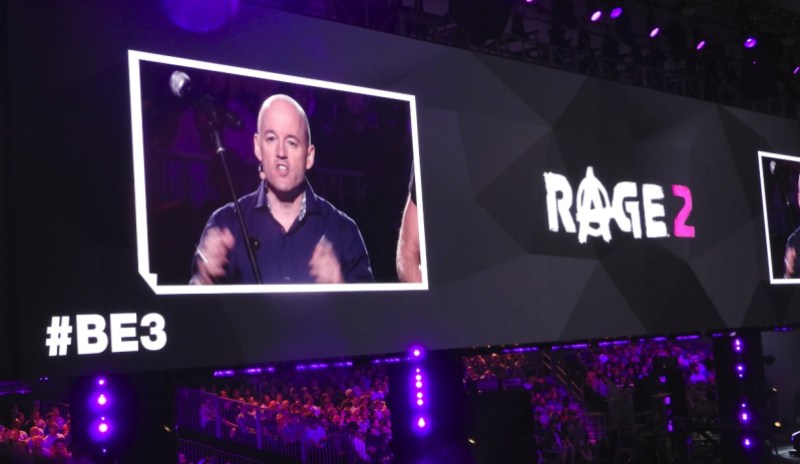 GamesBeat: I like that freedom, the ability to go anywhere, but sometimes I can lose track of a main story. In Mad Max I definitely lost the thread, or I would just hit a wall that I couldn’t get over.

Willits: That’s always a challenge. The way we handle the story now is a bit different. For instance, if you take the Eden Space Center, you have to get through that mission. Based on how you play the game, though, you might come up to that mission with very few nanotrite abilities, or all of the nanotrite abilities. Well, except for Shatter, because it comes from there. But If you get there and you feel that those guys up front are too powerful, you might bomb them from a distance.

I do feel that Rage 2 is more approachable, because you can engage the combat at the speed you want. But we do have a high distraction factor. If you easily get distracted and lose track of what you’re supposed to do, you will have that problem. Even me, they’ll call and say, “Hey, Willits, can you check this mission?” And then I spend two hours trying to jump a ravine with the monster truck. So there is a high distraction factor. But it’s definitely a rich world.

GamesBeat: What else do you think Rage 2 has that improves on Rage?

Willits: We have more vehicles. If it has wheels, you can drive it. We have flying things, things that float. We have more story. The action is tense. It’s something special. People who haven’t played the first one should not stress about playing the first one. You’re a different character. He talks. He gives context to the world. We have some characters that return in this game, of course, but the story, the time period, who you are, they all stand apart making up their own game.

GamesBeat: I don’t know that I like the scarcity of ammo as much. I like having a lot of things like grenades. How do you manage that with the nanotrite abilities?

Willits: The way that you play, you’ll be the type of player that will engage. Because those recharge so fast — again, the more you use your nanotrite abilities, the faster your kill streak will go up, and then the faster you’ll get to your overdrive. Because the nanotrite abilities are based on time, you’ll never not be able to kill somebody. But because there’s such a quick loop — we did that because it’s an open world game and we wanted that intense fast combat, but you can engage somebody from very far away. We feel that mechanic of rewarding players for getting into the fight will definitely help.

GamesBeat: The guns felt good as far as being able shake somebody off, move, and then close back in on them. 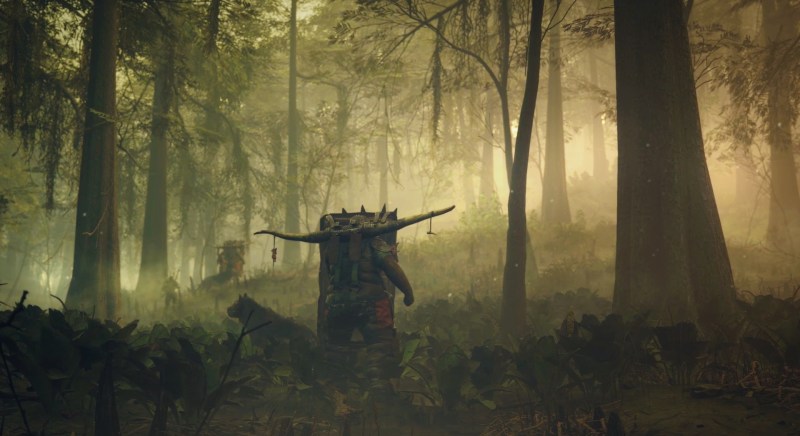 GamesBeat: How is the handling of the cars different?

Willits: We only have 15 minutes, so it’s hard to demo an open world game. But if you played any Avalanche open world game, you know those guys are good at vehicles. Especially Mad Max. That game was the best. Max was more about vehicle melee, though, hitting things. We have more guns on our vehicles.

GamesBeat: Do you have that almost pirate-ship-like boarding style?

Willits: Well, I won’t give anything away, but that was definitely something that was critical. It was a major component of Max. But guns on the vehicles, that’s something Rage pushes further on.

GamesBeat: If you’re fighting other vehicles, that’s what you’re using.

GamesBeat: Is the story as crazy as the action, would you say?

Willits: You’re in a world where you’re fighting the Authority that everyone thought was gone. You have crazy factions and stuff. But it’s the intensity of the world and the action — that’s the over-the-top feeling. The story is richer than the first one. It’s non-linear, which people like. There are more side stories where you can learn about the world and the people there. Because the world is so different, I guess you could say it has a not-normal sense to it. But when we say “crazy,” we’re talking about the action. 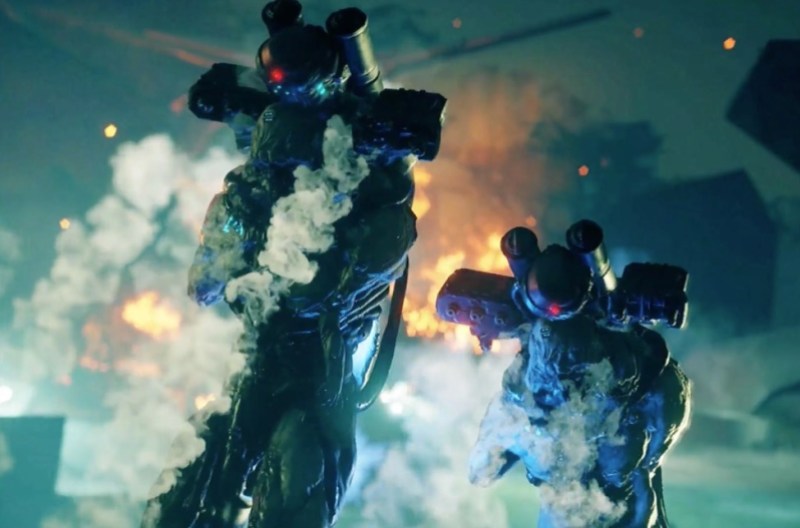 GamesBeat: John Carmack led a lot of Rage, right? It’s interesting that it’s been so long now. You have access to a different generation of people to make this game. What’s that been like?

Willits: It’s great. One of the reasons that Avalanche enjoyed working in the universe is because there are no limitations. We can do what we want. We’re not constrained by an IP or a world setting or anything like that. It’s allowed us to be more creative. We’ve got the right engine. In Rage, the megatextures were pretty, but they weren’t useful for gameplay. Now we can create a world with all these different biomes. There’s no loading. It’s seamless, fast, and smooth. You saw the Just Cause 4 demo, right? It’s that same engine.

GamesBeat: Is there some hope that Rage 2 can elevate this into something that’s a more regular staple of the Bethesda lineup?

Willits: Like all publishers these days, we want to have a longer tail on our games. We have some community ideas. We’ll have some post-release content, some free and some paid. We’ll figure that out when we get to it. You’re always competing for your fans’ attention and time. We definitely want a longer tail on this product. We’re excited about it. It’s very unique. It’s different. It sits well with Wolfenstein, DOOM, Quake Champions, Rage.

I tell everyone that this is the year of id. We have four IPs on our showcase stage. This year’s QuakeCon is going to be over the top. We’ve never had all four of our IPs in development and so successful. This is the golden age of id. It’s awesome.

GamesBeat: How many people do you have across id now?

Willits: We still stay small. We’re not too big. But we also work with really good partners, like Machine Games. Geniuses. The partnership with Avalanche has been amazing. We’ve been able to take our IPs and work really well with people. It’s been good.