DLive has launched its blockchain-based livestreaming platform on Android today. The platform is available for download now on the company’s web site and on Steemit.

The platform, which launched six months ago, has an active community of over 500,000 monthly active users who have paid a combined $2.6 million in cryptocurrency to creators in the form of upvotes, gifts, and donations. Blockchain is a secure and transparent ledger for decentralized networks.

DLive is a live streaming video community that’s built on top of Steem blockchain. On DLive, the community determines what content should be surfaced through an upvoting and flagging system. As a decentralized platform, DLive does not take any revenue nor fees from creators.

“Blockchain has enormous potential to change how people stream and watch videos,” said Charles Wayn, CEO of DLive, in a statement. “Today, the industry is dominated by a few massive companies who are incentivised to take money from their creators and push ads into content whenever possible. By decentralizing streaming, we can democratize video content while giving a better overall experience to viewers and creators. Creators on DLive also have a chance to find an audience and not get not buried under millions of streamers, as with larger platforms.”

On DLive, creators can earn Steem tokens by receiving upvotes on their content and gifts from their fans.

DLive also has a dedicated content management team, which manages a curation account with over 2 million Steem Power, to rewards creators directly based on the quality of their videos. Viewers can also earn tokens by doing things like upvoting content, making meaningful comments and referring new users to join DLive. 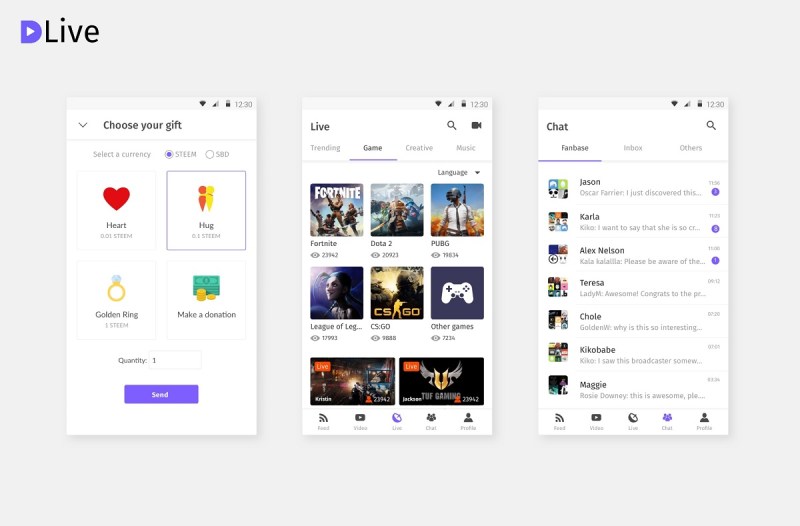 Above: DLive lets fans give streamers rewards in cryptocurrency.

“DLive has revolutionised streaming,” said David ‘Tidy’ Wyatt, who has been streaming on DLive for four months, in a statement. “Coming from a site where earnings are directly linked to your view count, DLive rewards its users based on content. I have told many fellow partners about this site, and they are loving it so far too.”

The company was created by Wayn and Cole Chen in Cupertino, California, and it has 20 employees.

DLive is a decentralized live streaming and video community that’s built on and utilizes the Steem blockchain to incentivize both content creators and viewers in cryptocurrency. DLive believes that all rewards belong to creators and does not take cuts or charge any fees to creators. Currently, DLive has 20 team members.

Rivals include Amazon’s Twitch and Microsoft’s Mixer, which are both far bigger in audience. DLive believes its primary benefits are for the creators and viewers.

DLive enables decentralized content monetization for creators while eliminating the middleman. Unlike Twitch and Mixer, DLive takes no percentage of revenue earned so they keep 100 percent of their earnings. They can also earn additional tokens via content curation from other users on the blockchain even if they are not on DLive, which rewards streamers for quality content as well as gifts / donations from fans. For viewers, there are no ads and they can also earn tokens by upvoting videos, making comments and referring friends.

While still in its very early days, one promise of blockchain is to provide an alternative to entrenched industries dominated by massive companies — from game streaming to finance, the company said. This is no different. DLive presents a new opportunity for streamers and viewers who want more agency in their streaming that’s not dependent on a third party. The platform doesn’t need to outgrow Twitch or Youtube to be a thriving community that’s a legitimate alternative.