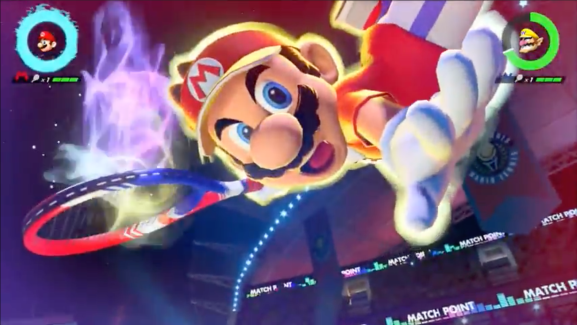 Mario is definitely the McEnroe of Mario Tennis Aces.

Mario Tennis Aces is one of my biggest surprises of the year. I’ve enjoyed some of Nintendo’s sports games in the past, but those were primarily the role-playing-like versions of Mario Tennis and Mario Golf for the Game Boy Color and Game Boy Advance. Aces, which hits the Nintendo Switch on June 22, is different because the main appeal here is the multiplayer tennis battle gameplay itself.

I love Mario Tennis Aces so far — even though I have some issues with its single-player content. But these are only review-in-progress impressions because we are waiting to further test the live version of the game, since its success will hinge on whether its online matches have any lag or other problems.

I’ll update this review soon with a finalized opinion.

The best tennis gameplay ever

At the core of Mario Tennis Aces is a refined sports experience with interlocking systems that are all easy to understand and difficult to use in conjunction with one another to outwit your opponents. At any time, you have the option between five basic shots that are all on the face buttons. The flat, draw, top-spin, drop, and lob shots are all crucial for getting your opponent moving around and out of position, and you will likely score more points with these than any of the other special moves.

But you can’t ignore the special moves. At any time, you can double-tap X or fling the right analog to attempt a trick shot that slows down time and is great for returning shots that are out of range of your standard returns. Time the trick shot well (or charge up one of the standard swings), and you’ll fill up your star meter. You can then spend your star meter on a bullet time effect, a zone shot that enables you to target specific areas of your opponent’s court, or an ultimate move that requires a 100 percent meter.

Aces is special, though, because you don’t have to just score points to win. You could instead try to KO your enemy by destroying all of their racquets. You do this by hitting them with powerful zone shots or ultimate smashes. If your opponent mistimes their return, they will take racket damage. Too much damage, and the racket breaks.

What’s important here is that all of these options are not just viable for, but are also critical to, winning. They are also not overwhelming or boring. Winning through out-scoring Wario is just as fun as knocking him out through racket damage. It also all feels so damn good. The swings look powerful when you want them to, other shots may have more finesse than brute strength, and that also feels great.

It’s the kind of online competitive experience that is so good that I can see myself returning to it for years, like with Splatoon, Overwatch, or Street Fighter.

This is not the first time Nintendo has brought a Mario Tennis into the HD era. Mario Tennis: Ultra Smash hit the Wii U in 2015, and it looked great on that system. Aces reuses some of the art from Ultra Smash, but it is also more refined and detailed than its predecessor.

Those details stand out on Switch. Mario, Wario, Peach, and everyone else all animate in their own specific ways. Their movement and swinging styles are all distinct from one another. And it makes the game pop and come to life.

Plus, Waluigi does a moonwalk special move, and I am here for that.

Single-player mode isn’t worth your time

Nintendo billed Mario Tennis Aces as a return to form for the single-player campaign, but that’s not the case. The Camelot-developed Tennis games won over fans with RPGs that played like true narrative adventures built around the concept of tennis. For Aces, you get a disappointing and boring series of challenges, a meaningless progression system for Mario, and cutscenes that are just talking heads with speech bubbles.

It looks cheap because it is cheap. The challenges are also frustrating and pointless. At best, I got through them so quickly that they weren’t an impediment to progress. At worst, I despised their obtuse design. Certain challenges have a timer, and you often know you’re going to fail them early on. Yet somehow this game doesn’t have a quick restart option. Instead, you have to quit out to the overworld map, wait for everything to load again, skip through the dialogue, and start over. It’s a baffling decision.

So yeah, this is not the single-player campaign you are looking for.

The Swing mode isn’t as good as Wii Sports tennis

Mario Tennis Aces has other modes beyond Adventure. You can do a tournament or free mode, but the other big attraction is Swing Mode. This enables you to use one Joy-Con as a motion controller just like with Wii Sports. The problem with this is that it’s not nearly as accurate or as fun as the tennis game in Wii Sports.

In Swing mode, your swings don’t sync 1-to-1 with your movements. The game waits for the ball to get to your character, but then it translates your movements based on where the ball is and not where it was when you actually swung. This makes it difficult to strike the ball they way you intend to. Instead, everything feels random and mindless.

Until Nintendo turns on the servers for this game — something it does not plan to do until more than 12 hours after the review embargo for the game lifts — I’ll understand if you get the impression that I don’t like Mario Tennis Aces. But I have played it with other people locally, and I put more hours into the online test. And if the final servers run better than that beta or if they run as well as Splatoon’s servers, then I’m know I’m going to play this game for the rest of the year easily. Few online games have clicked with me as quickly as Mario Tennis Aces, and I expect it’ll end up on my top 10 at the end of 2018.

But if you are looking for a Mario Tennis experience that takes you back to the RPGs on the Game Boy systems, you will not find it here. Everything about the solo game is boring and forgettable.

Mario Tennis Aces comes out June 22 for the Nintendo Switch. Nintendo sent us a digital code for the purposes of this review.