One of the pleasant surprises at the Electronic Entertainment Expo (E3) game trade show last week came from Alan Wake developer Remedy Entertainment and publisher 505 Games. They announced the cross-platform game Control, a supernatural third-person action-adventure game. It’s a big investment in a new franchise and one that emphasizes the single-player experience that other companies are talking about avoiding.

Remedy is a Triple-A developer that made games such as Quantum Break and Alan Wake for Microsoft’s platforms. It is spreading out to more platforms, but it is also refraining from creating a giant open world like other developers are. It is taking the Northlight Engine it developed for Quantum Break and using it to create a game that is centered in one space.

In this game, you dive into a darkened, brutalist-inspired world where everyday reality has been invaded and corrupted by an otherworldly force called the Hiss, said Anna Megill, senior writer at Remedy, in an interview at E3 with GamesBeat. The hero is Jesse Faden, a woman with a dark secret in her past that’s left her searching for answers. Her quest leads her to the Oldest House, which is the mystical headquarters of the Federal Bureau of Control. The story takes place within that building, but it is forever shifting around.

I talked with Megill and Remedy creative director Sam Lake about Control. They say that they’ve never had as big a team working on their narrative experience as now. Here’s an edited transcript of our interview. 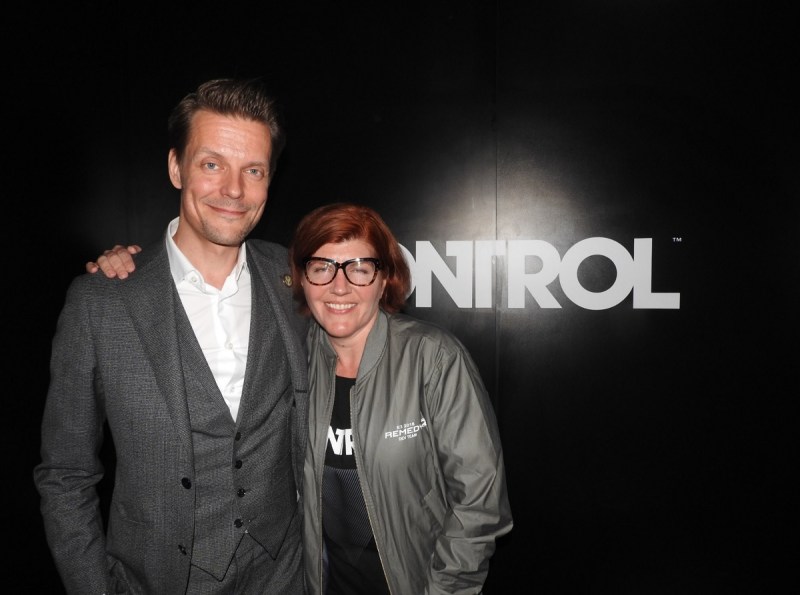 Above: Remedy’s Sam Lake and Anna Megill are working on Control.

GamesBeat: Can you give me a little context for the demo and the story?

Anna Megill: It’s a supernatural third-person action-adventure game. You dive into a darkened, brutalist-inspired world where everyday reality has been invaded and corrupted by an otherworldly force called the Hiss. You play the game as Jesse Faden. She’s a woman with a dark secret in her past that’s left her searching for answers, and that quest for answers leads her to the Oldest House, which is the mystical headquarters of the Federal Bureau of Control, a strange and secretive government agency.

Of course, this is a Remedy game, so when she gets to the Oldest House everything goes horribly wrong. The Hiss invade. They kill the current director, Zachariah Trench. Through a strange ritualistic process, Jesse becomes the new director, and she has to master her new abilities, supernatural abilities, and fight the hiss to regain control of the Bureau and the Oldest House. That’s our game.

GamesBeat: How far into the game is what we saw?

Megill: It’s about halfway through.

GamesBeat: It sounded like the world is reconfigurable, almost? It’s rebuilding itself?

Sam Lake: The idea is that the Bureau investigates these unexplainable things. The building itself, their headquarters, is one such thing. It’s a place of power. The Oldest House is vastly bigger on the inside than the outside would lead you to believe. At least sometimes, under the right conditions, if you know the right rules and rituals. You can open doorways and keep on traveling deeper. Maybe even forever? Step by step, you’re leaving our known reality behind. 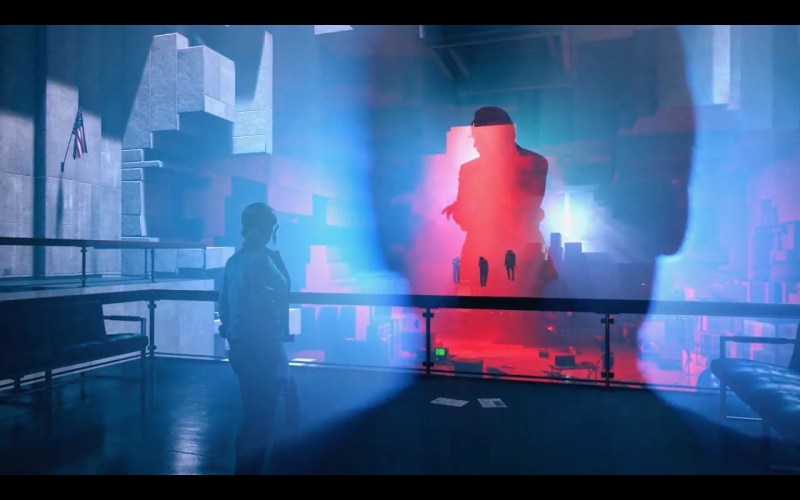 GamesBeat: How different would you say this is from the Quantum Break experience, the world of Quantum Break?

Lake: This is a very different game. Obviously we try to learn from each project. In Quantum Break you had your superpowers, your time powers. Here, Jesse has supernatural abilities. So you could say that some similarities are there. But that’s pretty much it.

GamesBeat: Is this more telekinetic here, as opposed to manipulating time?

Lake: With our own engine we’ve been pushing dynamic destruction and physics as far as we could take them in this generation of technology. Because of that, some of the abilities that you gain are very telekinetic by their nature, which goes to—you can break the environment and then use it in a very organic fashion with your abilities as your tools, as your weapons. Some of the enemies do the same. It does get rather crazy.

On the gameplay side, this is a deeper action experience than we’ve ever created before. Jesse has her director’s gun, this mystical weapon, that changes its shape and form. You can unlock new forms for it and make it do different things. You unlock these supernatural abilities. You can tweak them. All of this combines with the enemies, with their own abilities. It can get pretty crazy.

But also, we have a big focus on world-building, ever since we started. We wanted to create a mysterious, deep world that the player can explore. Already, from that standpoint, we wanted to create a less linear experience than we’ve done before. All of our experiences have been very linear in nature. This is less so. We’re exploring taking steps into that direction. There is a story, a main story, but there’s a lot of other things, other missions, secrets, challenges, everything in the world that you can go and pursue. Even after you have completed the main story.

GamesBeat: Does it all take place inside the Oldest House, or are there other environments?

Lake: That’s kind of a—if the Oldest House is a shifting place, that’s kind of a shifting answer. All of this takes place inside that building. But it’s a world inside that building, because you can end up in very strange locations. It’s one big world, and it’s an interconnected world. With different missions you keep traveling back and forth. When you discover the ingredients and clues for certain rituals, you might come back to a place you’ve already gone through multiple times, and only now do you understand that if you do this here, it causes the building to shift and new areas open up.

Lake: A big inspiration as a literary genre is the “new weird,” a subgenre of science fiction, where often our familiar world is intruded upon by the unexplainable. Often in new weird you’ll encounter forces that maybe even ultimately can’t be completely understood by the human mind, or our science isn’t ready to really understand what these things are.

We have a lot of dream logic in the building with these strange weird forces, looking into concepts like the collective unconscious. Things that aren’t connected by causality — knocking over a chair and it falls – but maybe much more by the meanings we give these things. A symbol of something might affect its actual counterpart.

GamesBeat: Do we know why people are floating in the air?

Lake: Yes, that deals with the enemies. When we come to the building, the whole Bureau has been invaded by this supernatural hostile force. They’re calling it the Hiss, trying to name it, trying to understand it. It has possessed and corrupted, on some level, the majority of the agents in the Bureau, and the building itself as well. Jesse’s task is to regain control and push this Hiss away. The Hiss possesses people in multiple ways and changes them in multiple ways.

GamesBeat: So they’re all still alive. They’ve just been taken over by this thing.

Megill: Right. To what you were saying about dream logic and what we’re talking about with new weird, we’re not going to hold people’s hands through this game. The combat is going to be challenging and the story is going to be challenging. We expect people to come into this willing to do a bit of work to try to figure out what’s going on and figure out what the Hiss is doing to people and how it’s affecting the House.

Lake: At least investigate and form a theory. Maybe even debate about it with your friends – “No, no, I think it’s this other thing.” In all of our games, we’ve used different methods of storytelling. Here we wanted to explore the idea of using the world as a storytelling tool. What are the different methods where the player can be in control? It’s a very player-driven experience. The player can choose. But then you get different fragments of this very deep, mysterious world, and you piece it together. 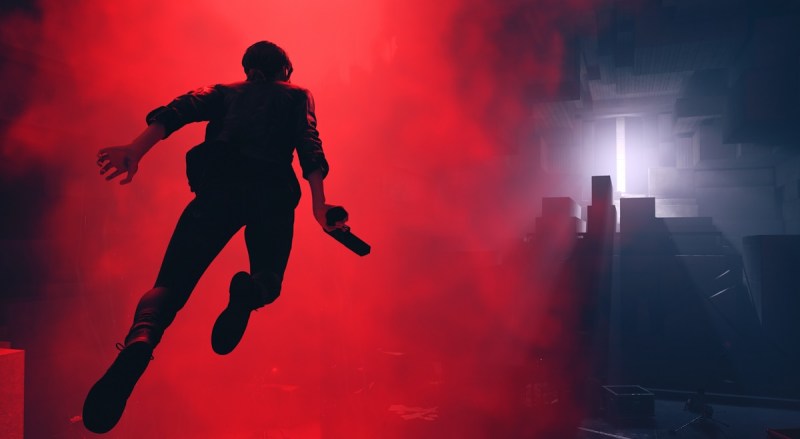 GamesBeat: Do you have a bigger narrative team than you’ve had before? Is it a writer’s-room sort of team?

Megill: We do have a group of writers. Some of them are working remotely and some of them are in the studio. We’re collaborating, and then Sam is acting as creative director. As the narrative lead it’s my job to wrangle the people on site and work with our narrative designer and the sound designers and everyone else on the team, to make sure that the story is in every aspect of the game, and we’re using every possible means to deliver that story. Including some unusual things.

GamesBeat: Quantum Break had a fairly complex story. If there’s a bigger narrative team on this one, that tells us it’s going to be fairly complicated?

Lake: Yes and no, I would say? There are a lot of elements there that you can dive into. The Bureau has so many secrets and such a history of all kinds of things, and then you have the current crisis at hand, and then you have Jesse looking for answers to—she doesn’t know that much about the Bureau, but she’s had this very destructive encounter with the unexplainable when she was a child that really changed her. All her life she’s been looking for answers to what happened and what that makes her. Now the game begins from the moment she’s discovered the Bureau and steps into this building. She’s hoping very much to finally find the answers she’s been driven to find for such a long time.

The main narrative, the main story, is very much Jesse’s journey, discovering her answers and finding her place in the world. But at the same time, all of these strange forces intruding upon our reality, all of the history of the Bureau, and many other characters she’ll encounter, all of them have stories of their own that you can piece together and chase.

Megill: They’re interwoven. But it takes far fewer people to write a linear story than it does to weave this web we’re creating right now. I don’t know that it’s necessarily more complex, but it’s less linear for sure.