I’ve been spending time with the recent Sega Genesis Collection on my PlayStation 4. I’ve been having fun going through the games that I’ve never played before, like the Zelda-ish action role-playing game Beyond Oasis. But one of my childhood favorites has monopolized most of my time with the collection.

And surprise, it’s not Sonic. I’ve been playing a lot of ToeJam & Earl in Panic on Funkotron.

Panic on Funkotron is a weird game. It’s a sequel to the original ToeJam & Earl, which came out for the Genesis in 1991. The first game is a roguelike, with two players navigating randomly generating levels with a top-down perspective. But ToeJam & Earl stands out because of its funk-inspired aesthetics and music. I can’t think of any other game or series that looks quite like ToeJam & Earl, which mixes early ’90s funk with Mad Magazine/Ren & Stimpy wacky-gross character designs.

Oh, and you play as teenage rapper aliens.

ToeJam & Earl is the rare series that stands out because of its style and aesthetics instead of its gameplay. Not to say that the original wasn’t fun. roguelikes were much less common in the early ’90s, and random levels were themselves still a novelty.

But the sequel took a different approach. Panic on Funkotron is a 2D side-scroller. This upset many fans of the original. Today, many gamers think that the series abandoning its roguelike elements for a traditional platformer setup symbolized ToeJam & Earl selling out.

Which is at least true, from a certain point of view. ToeJam & Earl developer Johnson Voorsanger Productions first started work on a sequel that was much more like the original. But Sega wasn’t impressed. When the studio turned their project into a 2D game, Sega saw something more marketable.

But I don’t care about any of that. Panic on Funkotron is the better game.

Yes, it went 2D. But it didn’t abandon any of the  weirdness. While the original takes place on Earth, the sequel is set on the duo’s home planet of Funkotron. This colorful, funky world is like acid-fueled marriage between Sesame Street and Dr. Seuss with its weird trees and unusual alien inhabitants. It’s a great setting for a game. 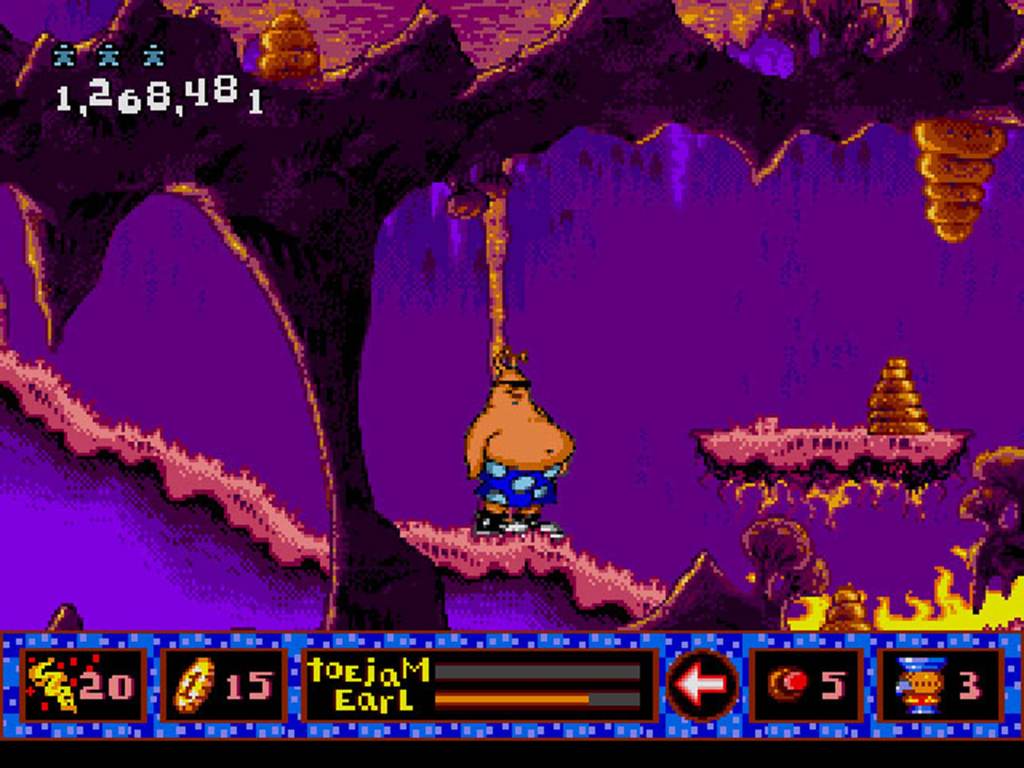 Above: I love me some purple caves.

And the 2D perspective shows off so much more detail. The top-down camera in the original had to be zoomed out for so players could get a good grasp of their surroundings at all angles. In 2D, we can see much more of the wonderful character designs.

Panic on Funkotron is a platformer, but it’s nothing like a Mario or Sonic. It’s kind of like an intense game of hide-and-seek. The premise has humans hitching a ride on ToeJam & Earl’s ship after the events from the first game. Feeling responsible for the human invasion, the duo set out to capture all of the humans in jars and send them to rockets back to Earth. To find them, you need to shake trees and search under manhole covers.

It’s not as frustrating as it sounds. A compass points you in the direction of the nearest human, and it also tells you when you’ve captured them all and can move on to the next level.

But even outside of this creative base game, Panic in Funkotron has a ton of side activities. You can beat-box and jam with friends in rhythm mini-games, try to impress judges by doing flips off of spongy alien goop, and then you have the Hyperfunk Zone. Ahhh, the Hyperfunk Zone. It was an endless runner before anyone termed the phrase.

Panic on Funkotron does have its problems. The platforming is floaty and slow. Sometimes the game wants you to jump on platforms you can’t even see. It can be frustrating. But its creativity still stands out in 2018.

A new ToeJam & Earl, Back in the Groove, is coming out later this year. It will play more like the original. I understand. Most people do seem to prefer the first ToeJam & Earl. But Panic on Funkotron will always have my heart, and it deserves a better reputation.