The Cyberpunk 2077 demo still had another half-hour left, but I already knew I wanted this game. I was busy writing during the Xbox media briefing prior to the Electronic Entertainment Expo in Los Angeles last week, so I didn’t catch the trailer for developer CD Projekt Red’s retro-futuristic followup to the The Witcher 3: Wild Hunt before my appointment to see the game for myself. And while I didn’t need to witness much more than the title screen, a bit of hacking, and a few cybernetic body mods to fall under its spell, it was the demo’s least dramatic scene and the one most reminiscent of the 1997 point-and-click Blade Runner game from developer Westwood Studios that made me desperate to jump into its world.

Cyberpunk 2077 is a first-person mashup of genres that all work together to enable you to approach missions however you want. You take those missions as a mercenary named V, who is one of the millions of people struggling to get by in Cyberpunk’s hellish future where corporations have filled in the gap left by a weak central government. In a tweet following the trailer at the Xbox briefing, Neuromancer author William Gibson said it looks like Grand Theft Auto with a retro-future aesthetic. And it is that, but from the hands-off demo I saw, it is also so much more.

It is oppressive and dense in ways that other games strive for but never attain. The streets are packed with people. The world is constantly speaking to you through advertisements and signage and strangers who set off your heads-up display. And when you turn the first person camera back to look up and see the sky, maybe you’ll catch a sliver of it through the cracks between skyscrapers.

It is a harsh world, and all the neon on Earth can’t soften off the edges of the transistors and light-emitting diodes that make it work.

What’s clear after that demo is that V is like any of the other little people walking the street. She (in the demo, CD Projekt Red selected a female character but you can customize your V however you want) is like any other Dirt Boy, Cyber Ninja, or Samurai Rockergirl just trying to put a few good jobs together to get somewhere closer to the top of the trash heap. 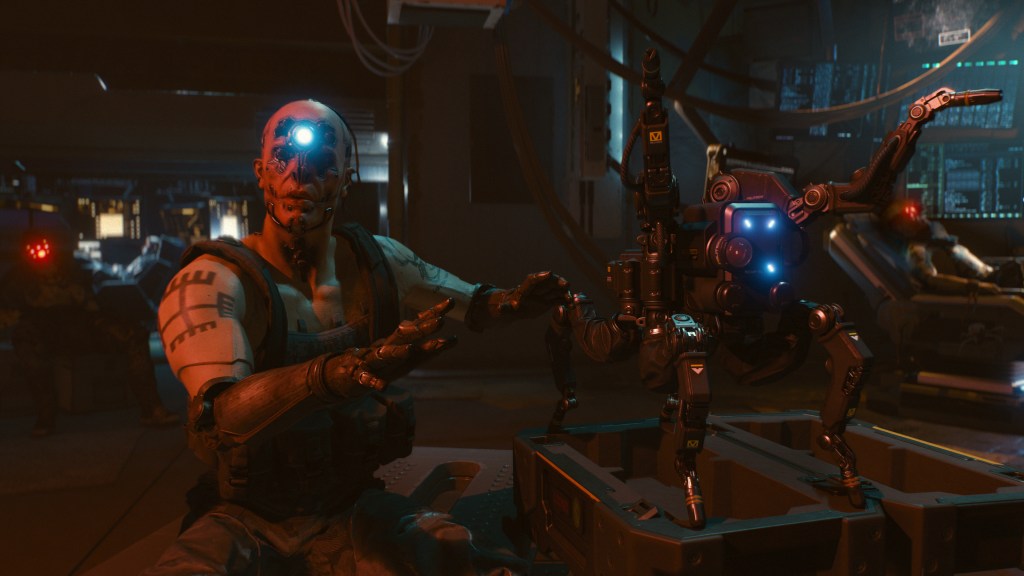 Above: Cyberjunkies who are obsessed with illegal military mods.

The first mission V took in the demo was to rescue some random girl from organ harvesters. You shoot your way through this section in what looked a lot like any other shooter game (you don’t have to play this way), and the girl is waiting for you unconscious and naked in a tub of ice. You pull out your USB cable and plug it into the jack behind her ear because when CD Projekt Red said “cyberpunk” it meant it. V discovers that the target has a platinum insurance plan that alerts a team of medics, but a virus is blocking the connection. You squash the infection, and the call goes out — the ambulance will arrive in three minutes.

When the first-responders arrive, they do so in a flying armored vehicle. Battle-ready medics jump out with a stretcher, but even more follow them with weapons drawn and pointed at you.

“Put the girl down and back up 15 feet,” the goons from the militarized insurance corporation yell at you.

You can’t escape the trash heap.

Except that the game does give you some respite. Shortly after that mission, V returns to her apartment, which is an oasis in the digital ocean. And here is where the game slows down. The world of Cyberpunk 2077 continues to happen at the speed of light outside your doors, but in your home, life happens on your time.

In the apartment scenes, Cyberpunk 2077 drops the first-person perspective. Here we get to see V moving around her private space. She brushes her teeth, she checks her messages, and she plans out her next move. It is quiet, serene, and a bit of a mess. But most importantly, it is isolated.

When I think of Blade Runner the movie or the Westwood game of the same name, I always gravitate to the apartment scenes. In the film, we spend most of our time with Deckard out in a crowded, filthy world with overwhelming stimuli and lethal danger down every alley. The game does a good job of re-creating that feeling with the character McCoy. But in both the movie and the game, we get to spend time in the heroes’ homes — and they both feel like fortresses in a city that tries to always leave everyone feeling exposed.

I craved that feeling so much as a kid that I never got past the McCoy apartment scene in the game. I just spent all my time walking around that space with Vangelis playing on the soundtrack.

And that sense of isolation is a crucial part of cyberpunk fiction. It’s an expression of modern urban living and how we have gathered in these megalopolises as a species to the point where no one ever has to feel alone. And yet as we push ourselves closer together, we retreat further away from one another.

Cyberpunk 2077 makes players face a city where everyone sees everyone else as a machine or a tool. Anyone you meet is disposable to you and vice versa. And while the corporations are capitalizing on that reality, they needed our help to create that situation in the first place. We had to let our relationships, families, and a belief in a collective public good decay to the point that corporations could step into the vacuum and fill those roles. And what do you get out of that deal? A quiet place of your own to escape the madness for a few hours each night before going right back out into it.