I’ve been excited about Bend Studio’s Days Gone since I first saw it at the Electronic Entertainment Expo (E3) in 2016. But the game has its skeptics (including some members of the GamesBeat staff) who think it is a generic zombie game. They don’t care that it’s set in the Oregon woods or that you can ride around a cool motorcycle and face zombie animals like wolves or bears.

As I noted in a previous demo, Sony’s Bend Studio team has heard the criticism that we already have too many zombie games, including some from Sony’s Naughty Dog studio that are among the finest games with the walking dead ever made. Nobody wants to create just one more zombie apocalypse game, even if it features a different setting from the usual urban rubble. Regarding zombie saturation, Days Gone creative director John Garvin said in an earlier interview that is like saying that “superheroes are played out.”

But I’m still high on this game, thanks to one of the latest E3 demos. Days Gone is particularly fun when you’ve got 250 or more zombies, known as “freakers,” chasing after you. Until the most recent E3, we didn’t get to try this part of the game, which comes out on the PlayStation 4 on February 22, 2019. I finally had a chance to do this big chase scene in a demo last week.

The first part of the demo was fairly generic. I had to go into a zombie-infested complex and fetch some parts for my motorcycle. I played as Deacon, the bounty hunter main character of the game. As we approached, we could see two freakers eating a smaller freaker. That was a nasty sign of zombie cannibalism. I sent my pal Boozer into the complex on a motorcycle to distract all of the freakers, who chase after him as he zooms into their midst with motor blaring.

That left most of the complex empty, so I moved in, hopping fences and using stealth to open doors. I had to take some zombies out through melee combat with by baseball bat. When that broke, I had to use a knife. But I never made enough noise to attract the horde. I kept going deeper into the place until I found the right motorcycle parts. Then I called for my friend. But Boozer got himself into a mess with enemies called Rippers. These were human enemies, and they’re just one more sign of how the whole world is out to get you in this game.

After a cut scene where the cultists burn Boozer, I had to go rescue him as they were about to brand him with some kind of tattoo. I pulled out my pistol, shot a couple of the cultists, and took the third out with a knife. Well, OK, I did this a few times and died and then I finally got them. They were quite well armed. I barely got my badly burned friend out alive as the freakers closed in on us. We escaped on the bike and finished the demo. It felt particularly unsatisfying. 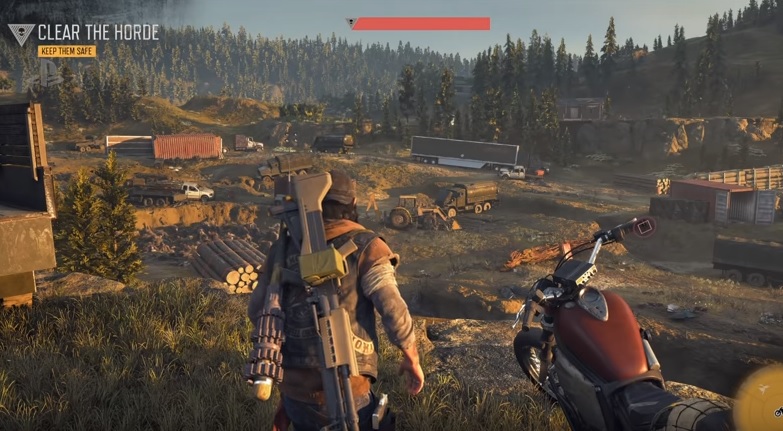 Above: Clear the horde mission in Days Gone.

But then I turned to the second part of the demo. Here, 250 freakers were milling about in a big pit in a logging complex. They were apparently feeding on a mass grave, oblivious to my presence, and the developers told me that you’ll encounter these kinds of gatherings of freakers in various places in the open world of the game when it is complete. They minded their own business.

I had my motorcycle, and I was sitting on the edge of a small cliff. I saw a series of things in the environment that I could use to my advantage. A truck ramp leading out of the pit could channel a bunch of the freakers. Next to it were a bunch of logs tied together, and next to that was a red gasoline drum. Those drums were there for the purpose of burning bodies in the wake of the world-ending pandemic. I knew what to do with those gasoline drums.

Toward the edge of the map was an overturned truck container, with its doors partially open. It was another great funnel. On the opposite side of the map was another such container. I had the good fortune of having three proximity bombs. I could also craft a few Molotov cocktails. I had a couple of hand grenades, a pistol, a shotgun, and a light machine gun with a lot of rounds. 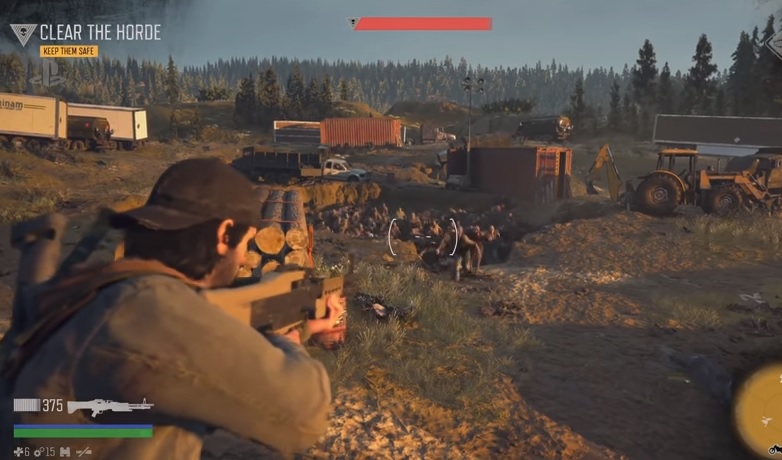 Above: Deacon tries to take on 250 or so freakers.

In my first attempt, I tried to toss a grenade into the midst of the freakers for starters. But from where I stood on the cliff, my aim fell short and it exploded without killing any of them. They awoke to my presence en masse, and I started running. I shot at one of the gas drums and it exploded, knocking out a good batch of them. But they didn’t slow down. They were fast. The music was pounding.

Next, I ran past a truck with a load of logs. I shot the gas drum for that one and the logs rolled on to a bunch of the freakers. Then I ran through my first trap, the truck container with the proximity mine. I didn’t slow down to see how many of them it took out. I kept running to the next container, where, once again, the mine blew up and I didn’t look back. I turned left toward a couple of semi trucks that were formed into a “V,” where my third and final proximity bomb was. But I didn’t notice that a bunch of the freakers had cut a corner and were now seriously on my tail. I tried to turn and machine gun them, but some got ahead of me and I was surrounded. And that was that.

Now that was fun. It had my blood pumping. On my next attempt, I set up similar traps in the empty truck containers, but I also put one proximity mine on a log pile that was close to the freakers. It was the very first thing that they ran into. I got on the motorcycle and rode it off the cliff. But I didn’t have enough speed and I simply flipped the bike over. I crashed the bike and had to run for my life. I made the run through the proximity mines again and blasted a few with my machine gun. I tossed a couple of molotov cocktails into the crowd, but they didn’t seem to do much. I realized it would be great to have two people in this party, one shooting backwards and one trying to drive a motorbike away from the freakers. But I had no such luxury. They caught me again. 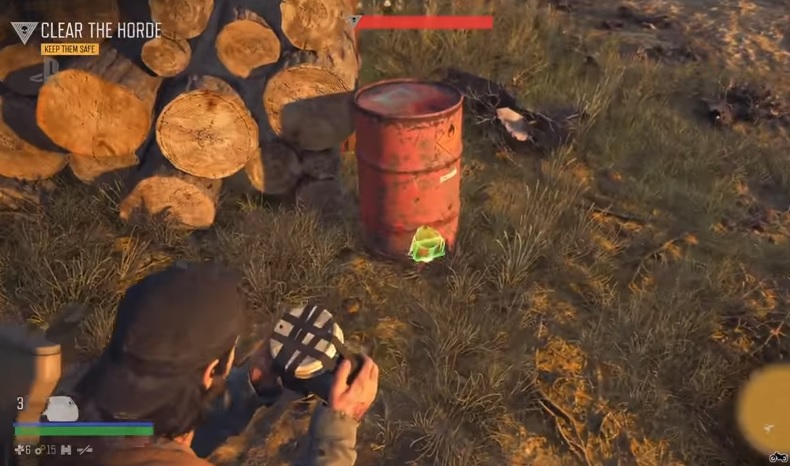 Above: Planting a proximity mine in Days Gone.

I had more grenades this time and tossed a few, and I tossed some more molotov cocktails. I came running around the corner and ran right into a batch of the freakers that were coming the other way. I was trapped, and they closed in and got me. During this run, I was happy to take out so many of them. But then I looked at the final count of how many of them I had killed. It was only about half of them. 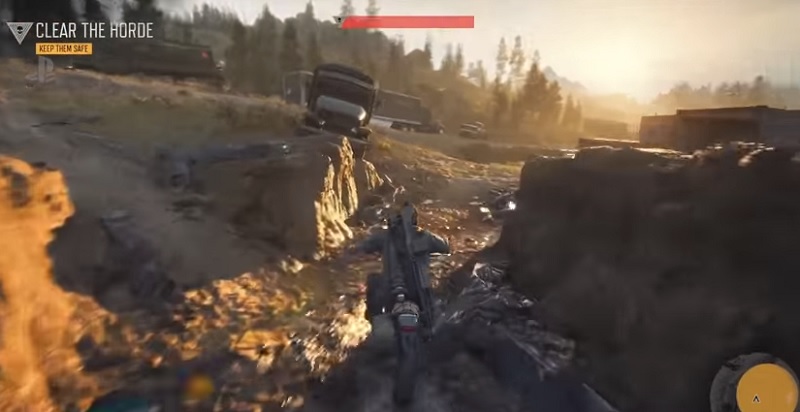 Above: Riding the motorcycle

Now that was a lot of fun. I could have stayed there all day and figured out how to take out more of them. If I had figured out how to get on the bike and run around with it and run through them with it, that would have helped. It would also have been good if I could climb on top of the trucks and make some kind of last stand with my machine gun, and then flee again when I took out a bunch of them that way.

It was sort of like being chased by a stream of enemies who were flowing like water after me, and I had to figure out how to stop that stream or slow it down and turn it into a drizzle. The game ran at a solid 30 frames per second throughout the demo. I’d actually be happy if they created a mode where clearing the horde was all you did in this game.