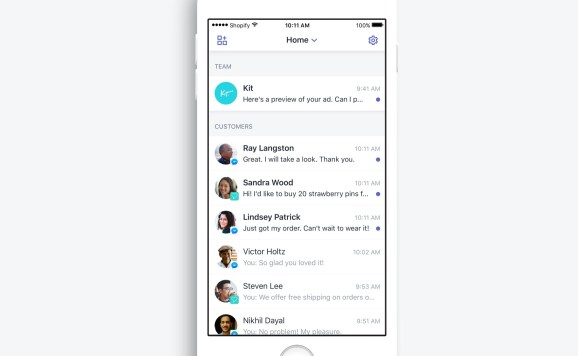 Shopify today launches Ping, a standalone app that lets merchants manage customer conversations, whether they begin on a website, Facebook Messenger, or via SMS. Ping is now available on iOS and is designed to link with the Shopify app.

Ping will include Kit, an intelligent assistant that can help merchants set goals, make Facebook ads without leaving a chat window, re-target ads, and send emails to customers.

Half of Shopify’s 600,000 merchants use its mobile app today, and Ping was made to give merchants a way to run their business in a conversational way, Shopify product director Michael Perry told VentureBeat in a phone interview. Perry has led efforts to develop and advance Kit since the marketing bot was acquired by Shopify in 2016.

The new app takes advantage of a series of changes being introduced for Kit. In addition to introducing natural language processing to give merchants more insights, a revamped Kit Skills API to bring more features to the automated bot is due out in late 2018.

By the end of the year, Perry wants Kit to be able to represent businesses in a chat environment by doing things like responding to frequently asked questions and handling shipping queries, though there are times when a human will need to take over.

Ping will soon use natural language processing, sentiment analysis, and other forms of AI to do things like highlight conversations that may lead to big sales, alert a merchant if a customer is angry about their order, or flag conversations likely to lead to returns.

“If someone is saying ‘Hey I want to make an order right now for 1,000 pins’, that’s not the right time for Kit to be jumping in and saying ‘Let me help you order 1,000 pins’. That’s the right time for a merchant to take control of the conversation. We’d prioritize that at the top of the inbox and say ‘You need to get involved right now. This is a potentially large sale’.”

Ping was made a standalone app rather than an additional feature in the Shopify app to give customers more choices based on what fits their entrepreneurial style or business needs, Perry said.

Though the app is beginning as a conversation manager, Perry said the eventual goal is to make it a place for merchants who want to automate workflows and manage their business in a conversational way. The overall idea is to help merchants save time and focus their attention on providing customers with the kind of flavor and charm that make small businesses stand out.