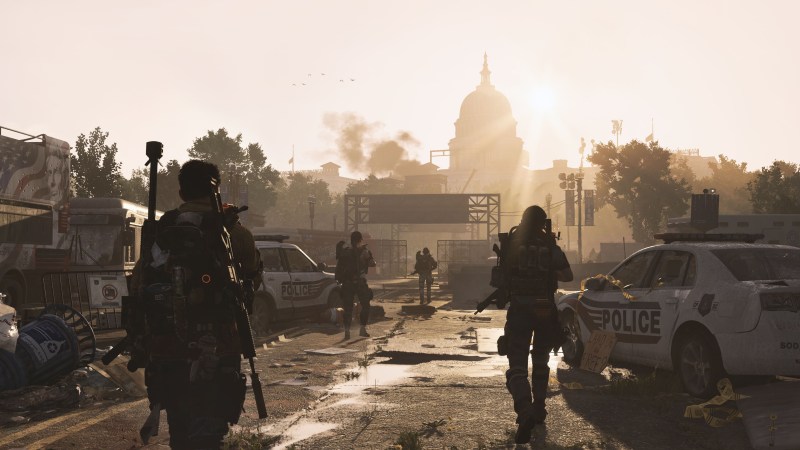 GamesBeat: The other interesting thing I see here is that E3 seems more real time. You used to announce something here and sell it six months later. Now you announce something here and it’s available for download right away, like Fortnite for Switch. EA had Unravel 2 ready for download. You guys have a store downstairs. Immediate gratification for fans at E3 is possible now.

Detoc: It’s a call to action. Pre-order now, register for a beta, play the game today. We’ve had that for years now. The Crew had a similar instance just recently, where we announced that you could start to pre-download the beta today. The call to action is a best practice in terms of retail. We have so many people tuning to our press conference–

GamesBeat: You can do it when the eyeballs are there.

Detoc: Exactly. You don’t have to , but I think in some cases it makes sense. Some companies may be more strict about that. We’ve done more or less depending on what makes sense. We did that two years ago with Trials, when you could download and play the beta as we announced it.

GamesBeat: It seems like we’ll see more esports tournaments here in the future as well. We have four here already.

Detoc: Instant gratification is a great American value. [laughs] I want it all and I want it now. But the attention span is limited. Opportunities are everywhere. If you extrapolate to how the whole industry is competing, we’re in a battle for people’s time. The way game design has evolved is exactly for that reason. We want to engage people and keep their attention, just like how Netflix gives you a whole series of episodes on day one. “Please don’t go away, because I know you’re tempted to try so many other things. If I release an episode a week, you’re going to forget about me in three days and never come back.” It’s a function of the high level of solicitation that’s in our lives now.

GamesBeat: Watching your press conference, I feel like even if you didn’t announce release dates, I could figure out when some of these games are coming. Beyond Good and Evil 2 feels like it’s some distance away still. Skull and Bones looks very ready to come out. How do you look at your lineup as far as what’s ready to show and what’s ready to ship?

Detoc: We said what we had to say. You have to put a stake on the ground for something like Assassin’s and say, “First week of October.” For Skull and Bones it’s less critical to give a precise time right now, and same for Beyond Good and Evil. There are different moments we need to make statements.

The statement for BG&E this year was that we want to work with the community on making game assets. People will be able to leave their mark on the game. They can make money, because there will be some compensation. It’s a filter for us to get stuff inside the game. It’s a business. So that was the story. It wasn’t, “This will come out on this day.” It was, “We’re continuing to build this game and it’s going to be on a massive epic scale.” 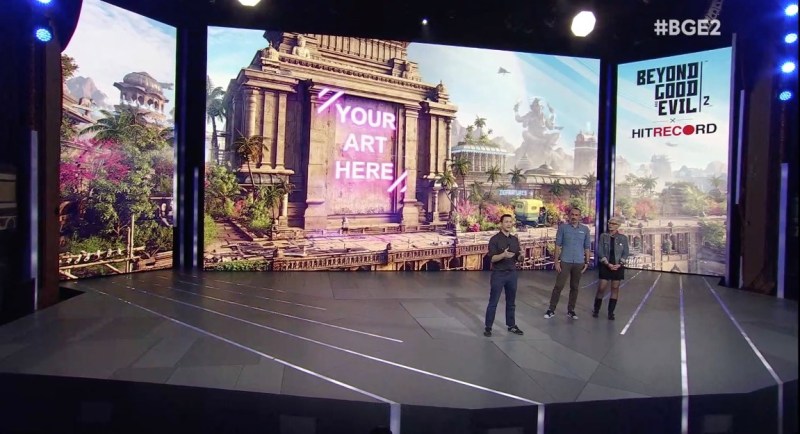 Above: Beyond Good & Evil 2 will use fan music and art.

GamesBeat: You had some pushback there. Some more cynical fans were saying that Ubisoft wants free labor.

Detoc: I know. That’s the thing. There’s only so much time you have to tell each of those stories. We didn’t focus enough on the fact that people are going to get paid for their work. People assume, oh, that means they want free labor, when that’s not true. The story is much more about engagement and giving people a way to express themselves and leave their trace in the work.

I think it’s a very cool idea, that you could have hundreds or thousands of people participate in making game who wouldn’t have the opportunity in other circumstances. I think it’s going to become a common practice. More people will do this. We’ll look back and say BG&E was a precursor. It works. I hope we can do that well, do justice to the fans, and do it in a way that results in a coherent game, so it doesn’t look like a hodge-podge of things that don’t make sense.

I’m very enthusiastic about this idea. When you think about how people have put their machines to work processing equations for things like studying the genome and whatnot, technology allows the community to come together around solving problems and creating together at scale.

Detoc: Right, but that’s not what we’re asking for. We don’t want 10,000 people to start giving us opinions as to whether the character should jump this high or that high. We have experts in game design to decide that. But there are a number of elements that don’t have those same constraints. For that it’s a novel idea. It feeds very well into the way of the world today. We can bring the diversity of the world into the game.

GamesBeat: I don’t remember the numbers now, but a long time ago I recall Microsoft had 1,000 people on the Xbox hardware and 1,000 people making games. Sony, at the same time, had about 2,500 people. You could look at that and say, “Well, Sony has twice as many software developers, so it stands to reason they’ll come out ahead.” When Microsoft decided to build these five studios this week, it seemed like it was about time they caught on to the idea that you have to have a lot of first-party development talent. Then I look at you guys and you’re at something like 14,000 now? Not too many companies can decide to make that kind of commitment. 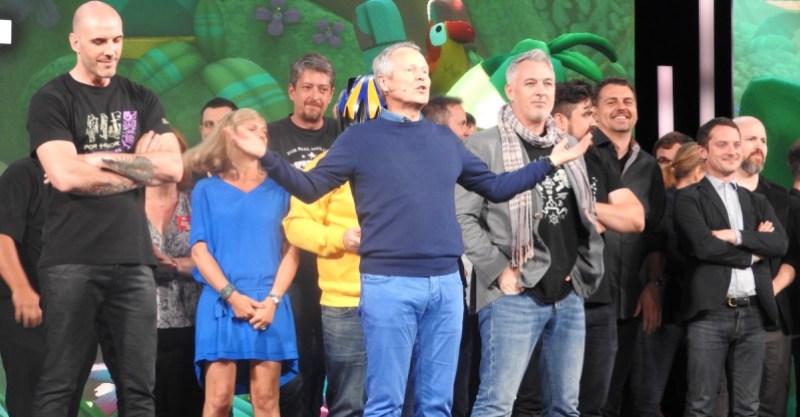 Detoc: You get up and decide in the morning and it happens 10 years later. You don’t build a company of 14,000 people overnight. We have about 14,000 total, but maybe 12,000 in active development, which is still the biggest group in the industry. It shows in our conference, the breadth of content and the variety we offer is second to none in the industry today. That’s one of the benefits of having this large pool of talent.

If you go back a few years, people were looking at us and saying we had way too many people. Financial analysts were telling us to focus, to reduce that number, to be more strategic. We would say, “No, this is the strategy. Games are going to need more and more people, especially as they go live. The team that works on a game has to stay on that game instead of continuing on to the next game.” If you don’t have enough people, you have to make a choice. Those are choices you don’t want to have to make, because both outcomes are bad.

What used to be something that people thought was a bad idea, now it’s being praised. We’re thankful that we stuck to our guns and built this momentum. Also, in the process we’ve been able to build something else, which is the collaboration between all of our studios around the world. That’s very difficult to establish. It’s a mindset. It’s best practices. It’s good habits of collaboration. It’s a critical strength of ours today.

GamesBeat: You guys seem way ahead there. 2K just announced that their Hangar 13 studio in Novato is opening a third office in Brighton, in the U.K., to go with their studio in the Czech Republic. It’s all one studio working on one or two major games, but across the three locations. It’s an interesting structure, to have the one studio in three widely separated places. But you guys broke down those walls.

Detoc: It fits us. Some other companies—I believe Microsoft’s studios are each attached to one brand in particular, so they’ll work more in isolation with one another. They may use outside teams to help them, which everybody knows how to do by now. We believe in the networking of the studios, in studio collaboration. We can shift people. When we control the associate studios, we can shift 50, 100 people here or there more easily. They’re all trained and used to working together. They’ve moved from one studio to another.

We just opened up in a few cities this year. Bordeaux is a very nice city in France, and suddenly our studio in Bordeaux is much better able to attract talented people and grow than we thought, because we have other people in studios around the world saying, “Sure, I’d like to move there.” When they do, they help attract more people from the outside. They help the studio do stronger outreach, and before you know it, there are hundreds of people in one place when we thought there would be half as many over that time. There’s a very nice virtuous cycle to our studio network. 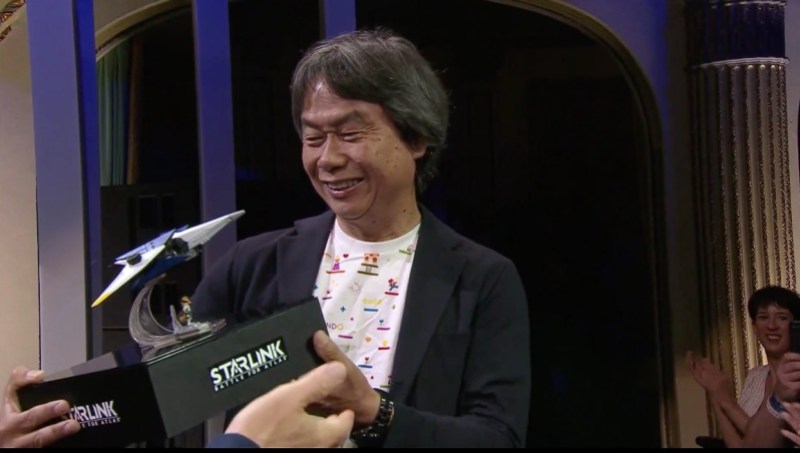 Above: Shigeru Miyamoto shows up to support the release of Ubisoft’s Starlink.

GamesBeat: You’ve built a strong relationship with Nintendo. It sounds like you can do interesting collaborations with them pretty regularly now.

Detoc: I don’t know about regularly, but you’re right that we have a strong relationship with Nintendo. We’ve been friendly with them for many years. I don’t know so much about the history of my competitors, but I’ve been at this show since it was before E3, and we were partnered with Nintendo even that far back. We were in their booth, whatever, 25 years ago? We’ve developed long-standing relationships with a lot of people at Nintendo. This is the result of that.

Are we going to do things like Starlink every year? Maybe not. This kind of opportunity just happened to come up two years in a row now. But more generally speaking, I’d say there’s a lot of mutual respect between Nintendo and Ubisoft. We’re trying to do the same thing, to do right by the people by making good games. We believe in a long-term vision. We got along well back then, and we still get along today.

GamesBeat: You must be feel a sense of relief that the Vivendi thing is over. That seemed like a lot of stress and pressure for the creative people.

Detoc: It was an unwelcome distraction. It took a lot of time and energy and focus away when it’s already a difficult business. It’s what it is. Now we can get back into our normal mode.