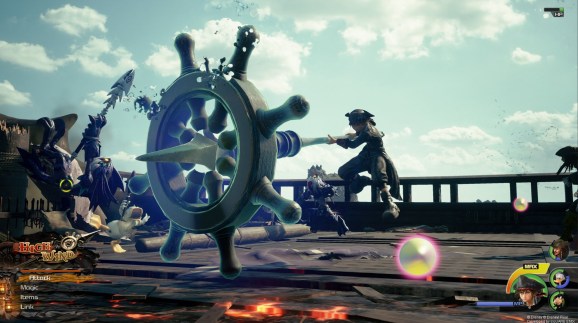 Kingdom Hearts III — which comes out on January 29 for PlayStation 4 and Xbox One — showed up a lot during the Electronic Entertainment Expo (E3) in Los Angeles earlier this month. When it showed up at the Sony presentation, we got our first look at a new world based on Pirates of the Caribbean: At World’s End.

This was surprising for a few reasons. Kingdom Hearts II already had a level based on the first Pirates movie. So far, with the exception of Hercules, Kingdom Hearts III hasn’t been including many repeat Disney franchises. It’s focusing on new worlds, especially ones based on Pixar films like Toy Story and Monsters Inc. along with ones based on recent Disney animated hits like Tangled and Frozen.

So why go back to Pirates? Specifically, why the third installment in what is now a series of five films? At E3, I had a chance to ask Kingdom Hearts III director Tetsuya Nomura this question.

“It’s not that we’ve been avoiding the reappearance of worlds from our previous titles,” Nomura told me. “They are reappearing as necessary. But for Kingdom Hearts III, one of our ideas or concepts was to try to have as many new worlds as possible. At the same time, I’ve always wanted to have at least one live-action world in Kingdom Hearts III. When we were looking at all these different live action titles, Pirates of Caribbean was one of the most interesting worlds, one that we thought we could create interesting gameplay around. There’s the underwater action and the ships. You can even be airborne. It covers land, sea, and air. I thought that would be a great opportunity, to use the Pirates of the Caribbean world.”

“Another reason was, because we wanted to have more realistic characters in the live action worlds — even more realistic than before — we thought that the Pirates of the Caribbean characters were unique enough in their details that we’d be able to re-create it as closely as possible with computer graphics.”

OK, but why At World’s End?

“When you look at Dead Man’s Chest and At World’s End, one is the setup for the other,” Nomura continued. “If we went with the second movie, then the story kind of ends in the middle. It doesn’t really make sense for us, because we’d have to end it in the middle as well. With At World’s End, I felt like there’s more dynamic action to it. Just looking at it from that perspective, it’s a better fit. I also wanted to show the battle with Davey Jones and make it as dynamic as possible, and to do that it had to be the third movie. It was just an easier fit overall.”

The reasoning does make sense. Dead Man’s Chest ends on a cliffhanger that leads directly to the third, while the fourth and fifth films don’t have action set pieces on the same level of craziness as At World’s End.