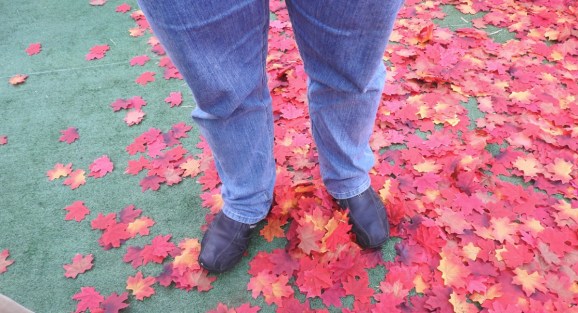 Ignore the shoes of journalist Chris Morris. Why does Sony have fake maple leaves?

“Seasons change everything!” insisted Fulton, who was very excited about the dynamic seasons in the game. Yes, that was cool tech. The racing game becomes very different in visuals and audio and gameplay with the change of seasons to winter, spring, summer, and fall. As he said this, faux leaves started falling from the ceiling throughout the expansive Microsoft Theater.

But I felt something was false about that claim, since, in real life, seasons don’t change things that much. Racing games have long had night or rain conditions. And this sounded like a marketing department’s way to dress up a game that was still essentially the same as the previous version that debuted on the same console. It represents a marginal improvement in graphics quality that may not convince some gamers to dish out another $60.

It’s kind of like what Electronic Arts says when it has a new version of Madden NFL Football. Can you imagine EA saying, “New rosters change everything!”

My colleagues and I had a good laugh about “Seasons change everything!”

Fast forward a few hours and I was sitting in the audience of Bethesda’s press event. Todd Howard made a presentation about Fallout 76, the new game in the post-apocalyptic series. His game was set in West Virginia, in the Blue Ridge Mountains, as a cover singer sang a version of John Denver’s Country Roads song. We saw the leaves again, falling from the autumn trees. I guess you could argue that leaves are very important, as they immerse you in the world that the developer has created for you, this tailored version of reality.

The next day, we went to the Sony press conference. And during the presentation of the beautiful Ghost of Tsushima, I heard the leaves rustling in the trees first. And then I could not help but notice leaves falling from the trees. A red maple leaf was blowing in the wind amid all of the greenery. Then, during the samurai battle, the maple leaves were blowing across the landscape. Those falling leaves were striking, and they added to the realism of the game.

After the press conference was done, we walked outside to the after party. And we saw faux Japanese buildings and, of course, faux red maple leaves.

Surely this is a coincidence, I thought. Sucker Punch, the developer of Ghost of Tsushima, didn’t make a similar claim about how seasons change everything. But I laughed again and took a picture of the leaves on the ground, as they lay under the feet of my friend Chris Morris. After many more jokes, I came home from E3. And what did I see? EA announces The Sims 4: Seasons, with plenty of fall effects like falling leaves.

How can this be? Four big games, all independently declaring that leaves are now important in video games. Does this mean that we’ve hit diminishing returns for interactivity and graphics in video games, where developers are making improvements to games by inserting things that we really don’t care about? What’s next? Interactive leaves, that you can crumble? If I go back and look at the rest of the games from E3, I’m sure I can find more autumn leaves.

You can see how my journalistic mind works. E3 featured more than 200 games and introduced a couple of thousand products. Yet my mind was searching in a paranoid way for the patterns to link them all together. When I saw Skull & Bones from Ubisoft, I started thinking it was the “year of pirate games” because crashing water waves change everything. But I could only think of one other pirate game, Sea of Thieves, and that meant it wasn’t a full trend, as we all know it requires three instances to be a trend.

We’ve all done this, and we’ve noted how we saw a “year of the bow” and then a “year of the grappling hook.” Thankfully, in reality, the video game industry isn’t just a bunch of lemmings. These are just fantasies of journalists who, for the most part, aren’t very good at statistics.

Of course, we do see a trend that is tearing up gaming and changing everything right now: the battle royale game. It came up in every interview I did at E3, either because I brought it up or the interviewee brought it up. Fortnite, PlayerUnknown’s Battlegrounds, and to a lesser extent, H1Z1 (see, three is a trend) have attracted huge numbers of gamers.

Panic stricken, some of the incumbents are worried about losing market share in first-person shooters. Both Activision and EA announced battle royale modes in Call of Duty: Black Ops 4 and Battlefield V. Gunpowder Games’ Maelstrom is taking battle royale to the sea, Paladins is taking it to fantasy, Surviv.io is taking it to cartoon games, and many others are following suit.

I suppose we have false trends, like the leaves, and real trends, like the copycat behavior going on with battle royale. If you’re making games, it’s always good to know the difference. It’s also good to be far ahead of the trends, making something that no one else is doing. That’s called innovation.

And remember, my opinion on this could change in a few months because … seasons change everything!