Audience: What does monetization look like in this situation, though?

Navok: What I’m looking at is the idea of a micro-engagement, where for example, if you’re watching a stream and you want to press a kill button, somebody dies and you spend a buck for that. The viewer is now an antagonist. You enter the arena knowing that the people watching may mess with you. It’s a new form of content.

Imagine, for example, that at Thursday night at 8PM, you’re watching something like the Running Man or Smash TV in real time. Somebody calls to the viewership, “Come on down, you’re going to play,” and you have a controller instantly. Every other viewer gets to mess with you, control the enemies, fight against you. It’s like what HQ Trivia could be. Is this a cloud game? Is it an interactive broadcast? It’s a new form of entertainment.

That’s where I think this can go. When you talk about what developers are working on, this is the start of it. The more that they leverage Twitch and offload computational rendering, offload cloud gaming, it all goes back to this. This is the beauty of what cloud is. It’s taking advantage of rendering power, computational power, and interactivity for that 2 billion people, but giving new business models, which is to say the ability to monetize these last people and the ability to engage these last people in a new way.

Audience: Someone pointed out to me once that in sports, in football or basketball, the amount of hours watched versus the amount of hours played is totally inverted. A lot of people watch the game who don’t play. How do you see this in the future of the games industry? A lot of these companies are in the business of selling units, but what happens if you have a game that’s pretty hardcore, but it’s really fun to watch, and there’s an elite group of maybe a couple hundred players, and then the entire monetization is through esports?

Navok: Right. In sports, I can’t get to the level of a major league baseball player, but I can watch them.

Audience: Is that game going to come along?

Navok: In the next two years. 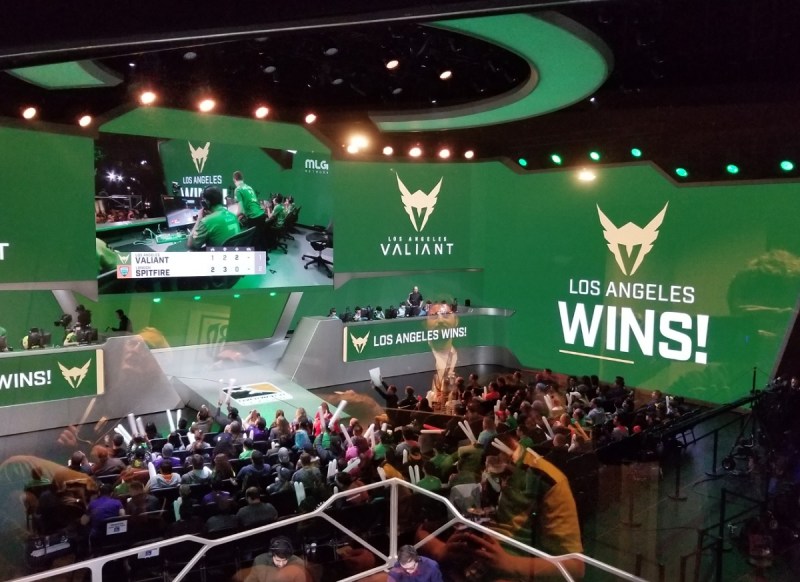 GamesBeat: The analogy feels like the publishers are trying to make money selling footballs. They’re not making money off of an ESPN broadcast.

Navok: Correct. That’s exactly the thinking that I’m talking about. The MLB doesn’t sell baseballs. At the same time, the publishers sell baseballs. If you look at the ways in which the esports equation is working, if they can begin to monetize viewership, all of a sudden you have a shift from a $120 million ecosystem into a $200 billion ecosystem, because now you’re monetizing people who you haven’t monetized before. That’s what solves the cost equation.

Tops: If you talk to Amazon — for them, Twitch and all that, that’s a game.

GamesBeat: Chris, how do you feel about selling baseballs?

Early: Frankly, it sucks as a business model. [laughs]

Navok: But you can also create businesses around other monetization opportunities. Again, the industry expands. It doesn’t shift.

Audience: Does anybody in the room see standards developing? What are those standards, and on what timeline do you think the industry will embrace them? Right now it seems like it’s pretty bifurcated. People are doing their own thing at each company.

Navok: I think the standards are actually going to be those streaming platforms. I see them as the future consoles, to the point that you’ve been making. I see YouTube, Twitch, Douyu in China, these are the things that you will operate off of because the customers are there. And then certain large publishers will own and operate their own platforms, streaming and broadcasting inside them. You’ll see that from Activision Blizzard. There will be alternatives to the set standards.

Think of it like what happens with engines today. EA and Activision create and own their own game engines. Other studios use Unreal and Unity. Depending on where you are in the ecosystem, you either use Twitch and YouTube, or you use your own.

Audience: Again from the perspective of standards, if you want to bring your game to the cloud, is there going to be a standard way to do that? Right now that’s totally nonexistent.

Audience: This is one of the challenges that OnLive faced. Even if it was a perfect solution, it still took a bunch of work to make your games work there. Maybe it’s scalable for one platform, but the second and the third and the fourth and the fifth….

Audience: That’s one of the advantages, why we went with Windows, because the games are already there. Everybody’s already building for it. For a game developer, if you build on Windows, you’re everywhere. You don’t have to deal with 100 different versions. To what we were saying earlier about Fortnite on mobile, Fortnite on mobile is not the same game as Fortnite on PC. It’s not the same experience. It’s very similar. But other games are even more different. The mobile version is a toned-down version, a bastardized version of the real game.

Tops: I totally disagree with that. What they have to do is make a totally different game, because the experience on the phone….

Audience: Sure, sure. To your point, if you want to port everywhere, cloud can do that in a way that’s been promised before, but it’s never been provided. On the experience side, we have thousands of graphics cards. If your game requires four of them — I saw an Nvidia demo of their new ray tracing technology that looked exactly like Star Wars. If your game requires four graphics cards, maybe you can charge customers more to play your game. That’s okay. Why should I have to pay $50 for a game, bring it home and realize it’s crap, and then pay $50 for a different game and play 10,000 hours of that? Why wouldn’t I pay more for the 10,000 hour game? That’s how you can monetize. In terms of development and distribution and monetization and new experiences, these platforms allow you to do that.

Early: We look at everything as a return on our development time. If we want to go and make that cloud game that’s totally tailored for that kind of experience, our addressable market is tiny. We can’t afford to do that. We can maybe start to iterate a little bit on some of our games, if we have some elements that start to work more. That’s what Microsoft did with Titanfall. They used cloud compute for the stars, for some of the AI. That’s incremental. That’s a broadly distributed consumer-adopted technology. We can’t afford to make that game.

Navok: How do you marry that with the idea that streams can work anywhere? Isn’t the addressable market instantly solved by the fact that that experience is available to so many?

Navok: That’s what I mean when I talk about an industry portal. We’re missing the customer acquisition funnel. I agree with that.

Audience: I think we’re stuck in a chicken and egg problem. We need to have more users to distribute content to, but….

Navok: It starts like Steam started, right? They started out with Half-Life 2.

Audience: What it takes is that big triple-A title. It’s what Oculus needs to start their funnel.

Early: There could also be an evolution in the customer base, which is the Steam point. This could happen from a streaming standpoint as more and more people — obviously I’m going to pick on your service—these people adopt your service, and suddenly you have 5 million people playing that. Some people are going to start to say, “Maybe I can do something for that.” Then we combine your five and GeForce Now’s five, and somebody else’s five — the numbers are going to get to a big enough number that maybe there’s a game that can be made directly for this platform. In the meantime, I’m going to sell the games I make now to this five. Now I’ve opened up my market further. But how do we get to the place where that player, that customer, can get a streamed game in enough places that we can start to make content for that? 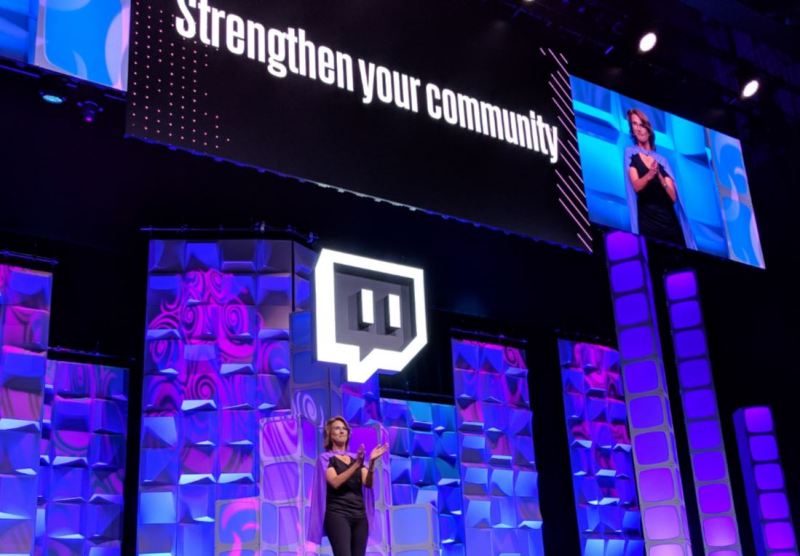 Above: Twitch emphasized its community during a keynote presentation today.

Navok: My perspective is, from pure cloud, that’s not there yet, although it’s probably going to be one of the big players, Microsoft or others, that create those portals. For the incremental elements, Twitch has 100 million. If you build it and operate on Twitch….

Early: That’s the closest we are to the mix of technology and model. There’s a whole side of the HD games that we make that is new in the last 10 years. It’s the viewership side. It’s not the play. It’s the rest of it. It’s the not selling the baseball part, which is a great problem overall.

Tops: There’s already a plethora of games for which, in the right circumstance, there’s already the right business model to be made. My belief, after being in the business and failing as well, is that you need to have frictionless models. We built our entire business model on the fact that no developer needs to do anything to run their content on our platform. Now that I know this, and this is why I’m interested in cloud gaming — we don’t need to do anything to publish to the cloud. We have a distribution agreement. They don’t care how we distribute it.

Early: You have a couple of our games on your service. And the challenge, unfortunately, for us is the business model. Not the technology.

Tops: But the business model will grow, because cloud gaming needs a size model, in my view. Cloud has a continuous cost. That’s the way it works. It has constant operating costs. You need to replace stuff. The ideal situation, the pipe dream, is that nobody owns a console anymore. Everyone just has a thin device, everybody lives on that thin client, and everything goes into the cloud, because then there’s no more need to buy expensive hardware. All the heavy lifting is done off site. That’s the endgame you want to move toward. Right now we’re in a very different universe.

GamesBeat: Amazon and Google are okay with that.

Early: I’m not sure about the interim phase. There’s a future state that we kind of talked about here, and there’s a today state. I actually view subscription gaming as inhibiting our progress, and I’ll give you two examples. One is with PS Now. I think that’s a great technology for getting streaming content to people, but we don’t make the money as a publisher — we don’t make the same amount of money as we would even just putting stuff on sale. So why bother, from a publisher’s standpoint?

The technology is great for a player. I can play anything anywhere instantly! It’s awesome technology, which is inhibited by the business model. So charge a PlayStation Plus add-on to be able to stream any game you own to any device you own. That’s a great service for the player. It’s going to start people adopting that streaming concept in more places. You’ll be able to get to a place where you have more people focused on streaming.

There’s a similar challenge with your business model. We see it works. We’re believers. You’ve capped it with a subscription plan, where publishers aren’t able to make money. On the other hand, you could just sell the game and let people have the five-minute experience while it downloads, or pay you an add-on price to be able to continue to have fast access in many more places. With subscription it’s just giving it away.