Frostkeep Studios‘s Rend seeks to improve on the survival game formula seen in titles like Facepunch Studios’s Rust and Studio Wildcard’s Ark: Survival Evolved. Its players are sorted into three factions straight away to encourage cooperative play and to give newbies a fighting chance. The game is in alpha, and it aims to enter Early Access on PC later this year.

While Rust looks fairly realistic and Ark features dinosaurs roaming its lands, Rend’s world draws inspiration from Norse mythology. It’s colorful and surreal, with star-splashed skies above and Yggdrasil, the World Tree, glowing like a beacon at the center of it all. Its map has 12 different biomes, and each has fantasy creatures that players can tame — like an elk with shining eyes or an enormous wolf.

Players will get into the survival game groove, gathering resources, building structures, and fighting off timed raids, which are called the Reckoning in Rend’s parlance and happen twice per week. But Frostkeep hopes that its team-based gameplay will make it attractive to a wide variety of people.

Because each server has three factions with up to 20 people each, players can divvy up tasks. Someone who’s enthusiastic about combat can handle the player-vs.-player aspect while someone else might focus on leveling up crafting abilities. When a teammate unlocks abilities on the game’s tech tree, everyone in that group can use it, which provides an easy way for new players to get into the mix. Everyone spawns in “friendly territory,” which a shield protects most of the time except during raids. At this home base, people can leave their hand-me-down equipment and create a stash of communal resources.

“The goal is to create a world where lots of types of players not only coexist but actually rely on each other, which creates interesting social dynamics,” said Frostkeep’s cofounder and CEO Jeremy Wood in an interview with GamesBeat. “That’s what keeps people playing games. It’s who you play with.”

Some of Frostkeep Studios’s team has previously worked on games like Blizzard’s World of Warcraft, which is rich with world-building. Though they’ve brought their experience with them, Rend won’t feature as much lore. It’s based on the idea that the pantheon of Norse gods are mostly dead, and you and the others are now fighting for supremacy on what remains of Midgard, otherwise known as Earth. Occasional snippets of flavor text will give you some backstory — for instance, you might find an item that once belonged to Thor. But it’s less about that and more about the survival and combat aspect.

Wood says that the studio views survival games as “spiritual successors to the early sandbox massively multiplayer online games (MMOs),” citing Ultima Online and Star Wars Galaxies as examples. Once World of Warcraft blew up, however, suddenly everyone only wanted to make so-called “theme park MMOs.” 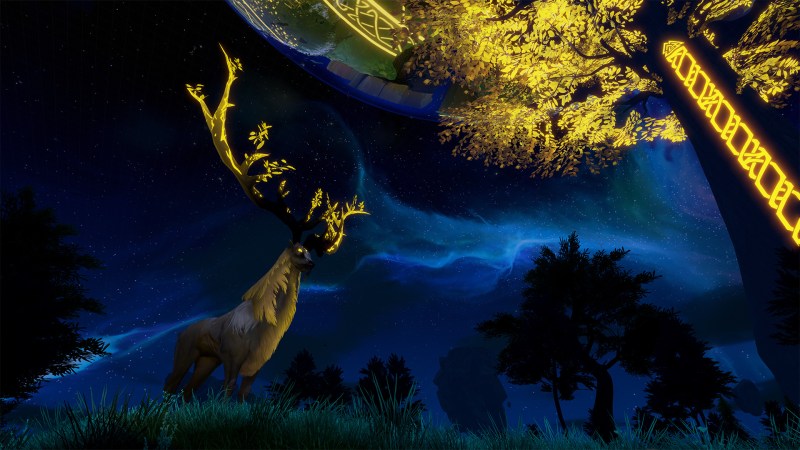 Above: Yggdrasil, the World Tree, is at the center of Rend’s map.

“All of a sudden, this huge section of players that loved these sandbox role-playing games, they were left with nothing. It wasn’t until a few years ago, when survival games started popping back up, that those players found something similar to what we knew,” said Wood. “We’re trying to bring some modern MMO elements that have grown in the last 15 years and put them back into that sandbox environment and create something that’s kind of the best of both worlds. It’s what we learned at Blizzard. You don’t necessarily have to have completely unique concepts. If you take existing things that you know work and pull them from all these places and put them together in a way that makes sense, then you have something new, something promising. You don’t have to reinvent the wheel. You just have to use all these awesome wheels that are already there and put them in a nice car.”

Along with veterans who worked on World of Warcraft, Frostkeep’s various team members have also worked on games like Overwatch, Riot’s League of Legends, and Carbine Studios’s WildStar. Wood says that, with these experiences under their belts, they’re familiar with how to support a live product, which will help a lot when Rend enters Early Access.

“Obviously, the pressure ramps up once you’re in Early Access, but it’s not like we’re going from zero to 100. We’re already in the 75 range. We have a lot of experience with live products,” said Wood. “It’s just a matter of how we apply all of that to something a little different. Fortunately, Early Access has a certain different level of expected service compared to a full-release game. It’ll help us get time to get on our feet a bit. But we have every intention of providing a full suite of customer service that you would expect from any game.”

Frostkeep has been around for about two years, and its team has grown from five to 17. It has a few challenges it will have to overcome, mainly getting the word out there, so people know it exists.

“It’s definitely a challenge having a new IP and a new company,” said Wood. “We have no brand to fall back on from a company perspective or an IP perspective. But what we do have is an extremely unique look. There’s no survival game out there that looks like this. Survival games love grays and browns. They live in that world of realism. Most of them involve machine guns and rocket launchers. Half of them involve zombies. We don’t have any of those things. We’re doing something that, visually and gameplay-wise, really stands out.”