Trion Worlds has acquired the assets of online game company Gazillion Entertainment, and it is also expanding its publishing platform for massively multiplayer online (MMO) games.

Redwood City, California-based Trion Worlds has purchased all the assets of Gazillion, which created MMOs such as Marvel Heroes until it lost its Disney license and shut down in November 2017. That includes all Gazillion licenses, trademarks, patents and domains, in addition to its library of games, said Trion Worlds CEO Scott Hartsman, in an interview with GamesBeat.

Trion Worlds will also beef up its ability to publish games created by other developers, using expertise in operations, networking, performance, security, player acquisition and analytics on a global scale. Trion Worlds will combine the Gazillion tools with its Trion Glyph platform to provide support and infrastructure for online game world developers.

Hartsman said the new technology and infrastructure gained through the acquisition will empower Trion Worlds to provide better technology to outside teams looking to bring their games and ideas to fruition through its publishing and partnership programs. Developers using the Trion platform will have the resources and technology to substantially reduce the time of their development cycles and greatly expedite the creation of exciting new products, he said.

“We want ourselves and other developers be able to make games and succeed and have sustainable life cycles,” Hartsman said. “Crunch and burn and lay off is unhealthy. We have tried to do things about it and we want to be a good member of the gaming ecology. We keep trying to do things to help other developers.”

Trion Worlds has created its own MMO games over the years like Rift, Trove, and Defiance, and it is working on Defiance 2050. It has also published games for other developers such as XL Games’ ArcheAge. Trove, a voxel MMO game similar to Minecraft, has more than 17 million players worldwide. 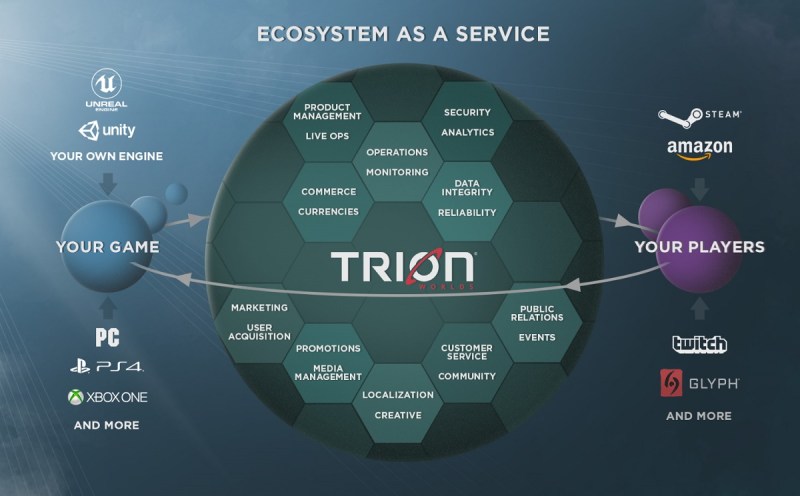 Above: Trion Worlds is publishing online games for others.

“We‘ve built an amazing ecosystem in support of our games and those we’ve published. We’re excited to add more tools to our library in order to embolden our teams and partners to create truly fantastic games,” said Hartsman. “Our suite of vital technology and experience in publishing and operation at a global scale allows us to provide essential ‘ecosystem as a service’ support, empowering developers from all over the world to create all new AAA online experiences, sustain their studios in very crowded markets, and take more creative risks.”

The Gazillion assets include a game engine that makes it easier to develop isometric games. Trion Worlds isn’t calling its collection of services and technology a “game engine,” as it will partner with game engine makers such as Unity and Epic Games.

“Our technology is platform agnostic,” Hartsman said. “We put an outside game on our platform and it just works. We spun up Trove in the Japanese market recently, and it just took a week.”

Hartsman took over at Trion Worlds about four years ago, and he described his tenure as “trying to bring some sense of stability to a rocky industry.”

He said, “We talked to lot of work for hire shops, and they have a passion for games. They aren’t mercenary. They have their own dreams of being in charge of their own destinies. One bad thing that happens is when a publisher keeps devs working hand to mouth. I heard that 10 years ago, and it stuck in my craw.” 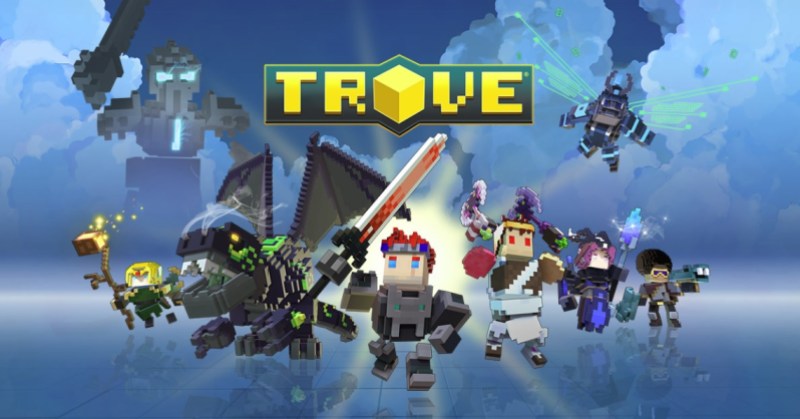 Above: Trove has 17 million players.

Hartsman added, “A certain dignity is lost when developers find themselves in subsistence relationships. That bothers me.”

Bluehole Ginno Games developed an MMO dubbed Devilian, and Trion Worlds published it. The game was a modest success, and that enabled the company to go on to PlayerUnknown’s Battlegrounds, which was a massive hit.

“They thanked us for helping them learn how to run live games,” Hartsman said.

Trion Worlds also opened a store for online games and served as the distributor for a number of independent game developers. But after another modest success there, Trion Worlds decided not to dabble in single-player games.

Now, with the Gazillion assets, Trion Worlds has a full ecosystem, including all of the tech that developers need to established their MMOs as ongoing services. Talks are under way with a number of developers who are using Trion World’s tools.

“What if you want to publish a game on the PC as well as the PlayStation 4?” Hartsman said. “There is store, security, customer service, server hosting, distributing processing, and other kinds of work to do. We believe developers can use us to get to a global scale.”

Security is a particularly tough problem these days, as distributed denial of service (DDoS) attacks are about 20 times bigger than a year ago, in part because cyber thieves are able to commandeer Internet of Things devices and use them to attack websites on a much larger scale now, Hartsman said.

“For a whole month, one of our games got hit every 34 minutes,” Hartsman said. “There is no single solution for that.”

As for Marvel Heroes, Hartsman said, “As this deal just concluded, there’s still more investigation that needs to occur. What we do know is that the company’s live servers were gone prior to our discussions with them. We believe that the license agreement behind that game expired prior to our involvement as well. We’re open to having conversations with any former partners of theirs to discuss ways to bring great games to life. At this time, we are focused on using the acquired technology to enhance our ability to support our current and future development partners.”