Adjust has launched a free open source performance benchmarking tool for app publishers. It is designed to help publishers and marketers better understand how well their apps are doing.

Market researcher eMarketer estimates mobile ad spending will account for 69.9 percent of all digital advertising this year. Mobile is the top advertising medium today, accounting for 33.9 percent of total U.S. ad spend — surpassing even TV. With spend increasing on mobile, it’s more important than ever that marketers understand how their apps perform.

In the first quarter, the Adjust tool produced a variety of interesting statistics. For games, retention is near-identical across paid and organic installs. This is unusual, given the expectation that organic performs better than paid. Japan has the highest retention rates, followed by the U.S., Europe and the Middle East, Russia, and China. Findings reflect that app user behavior in China is distinct.

Engagement on iOS is consistently stronger than on Android, according to the tool. Most users have two to three sessions per day, with paid users showing a gradual rise in sessions over time, while organic users tend to remain fairly stable. Japanese users play games more times per day than anyone else, and they stick around the longest, making them potentially the most valuable and loyal users in the world. Russia is the second most engaged user base.

Adjust’s benchmarking tool culls information from its database of more than 7,000 apps, providing marketers and app publishers with broad measurement capabilities and insights.

Marketers can use the tool to create customized benchmark reports that compare their app’s performance against their own verticals and others, across regions, user types (paid vs. organic), and platforms (iOS vs. Android). This saves advertisers from having to purchase costly general benchmarks from third parties or settle for basic reports that are not tailored to their needs. 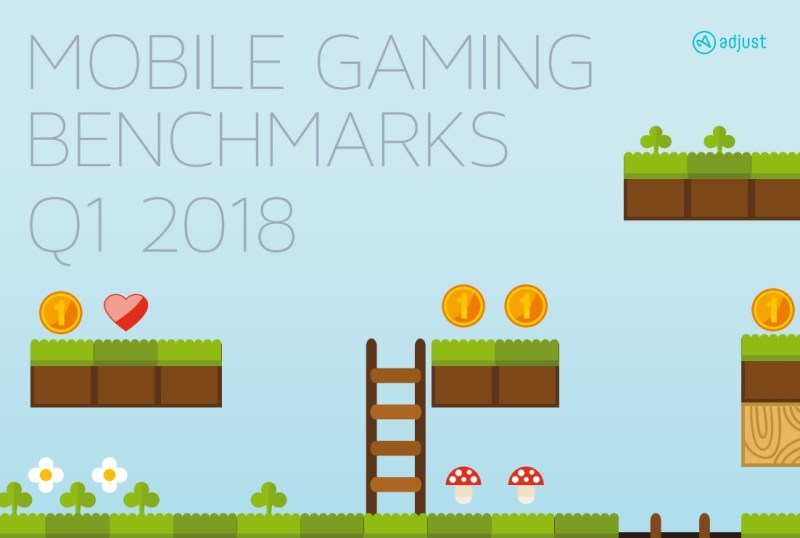 Above: Adjust has used its tool to come up with stats on mobile gaming in Q1 2018.

“Due to fierce competition, app marketing teams no longer focus solely on their own segments, but seek bigger growth in international markets,” said Christian Henschel, CEO of Adjust, in a statement. “Our benchmarking tool enables mobile marketers to define and benchmark performance across both markets and industries, free of charge. It is also the first product of its kind that makes specific KPIs, such as session data, publicly available — helping brands make smart and market-data-driven decisions.”

The data can be sliced and diced by user type, platform, and region. Regions include Europe, Asia Pacific, North America, Latin America, and the Caribbean. The tool enables marketers to compile findings into advanced reports, which can inform marketing activities and tell app developers and publishers how well their app is performing.

“Getting to the right app performance data can be really challenging and time consuming,” said Sebastian Goldt, head of performance ad networks at InnoGames, in a statement. “Adjust’s benchmarking tool allows us to customize criteria for internal reporting, so we get the answers we need quickly. This will be a critical tool for us in our ongoing effort to improve app performance.”

In terms of other first quarter data, Adjust found Android users perform far more in-app events than iOS users. Users in Europe and the Middle East perform the most events of all, with the U.S. second and Russia third.