In this era of remasters and reboots, everything old is becoming “new” again. So it’s hardly a surprise that Enhance Games is releasing Lumines Remastered today to bring back the classic PlayStation Portable puzzler, Lumines. It’s still as fun today as it was in 2004, and at a budget price, it’s a great warmup for Enhance’s upcoming PS4/PSVR game, Tetris Effect.

But while Lumines is easy to pick up and put down on the portable Switch, it’s also hitting PS4, Xbox One, and Steam platforms, where bigger screens tend to show its age and heldheld roots. So if you loved Lumines before, or are looking for a simple and fairly addictive single-player puzzle game to play on the go, you’ll find the remaster compelling — otherwise, you might want to save your dollars. 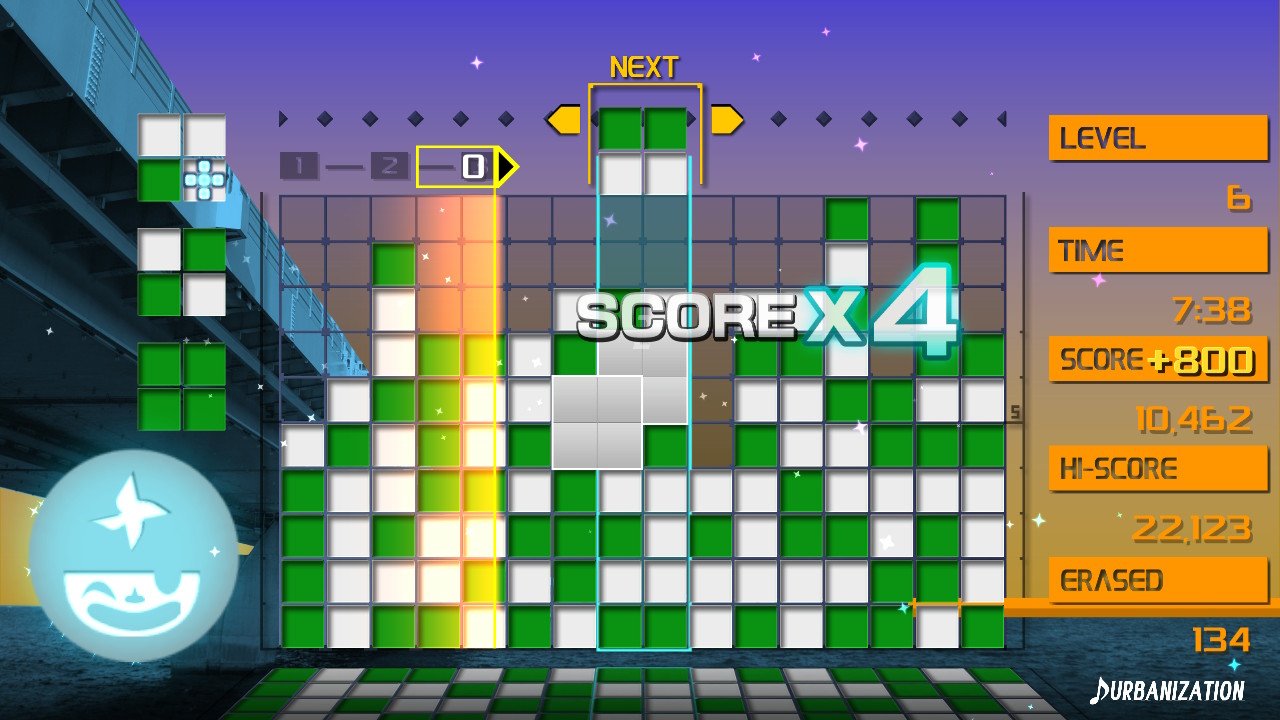 Above: The ideal Lumines skin lets you clearly see the two colors you’re matching into rectangles.

As the story goes, Enhance Games CEO Tetsuya Mizuguchi created Lumines after narrowly missing out on the license to create Tetris for the PlayStation Portable, fusing the musical themes of his hit shooter Rez with a block-dropping puzzler. In the primary game mode, Challenge, you start with an empty 16-by-10 well, dropping 2-by-2 cubes into the well in order to make solely rectangular matches of four or more blocks. Each game — and each block — has a maximum of two colors to match.

With one exception, blocks only clear when a 2-by-2 or larger rectangle consists solely of one color. Moreover, the rectangle only disappears when it’s touched by a glowing timeline that sweeps from left to right across the screen. To keep things moving, Lumines will drop a rare plus-marked connector block that clears whichever same-colored pieces it touches, regardless of whether they’re part of contiguous rectangles. Played right, this block lets you eliminate stranded pieces, then make a bunch of matches from whatever’s above and below them. 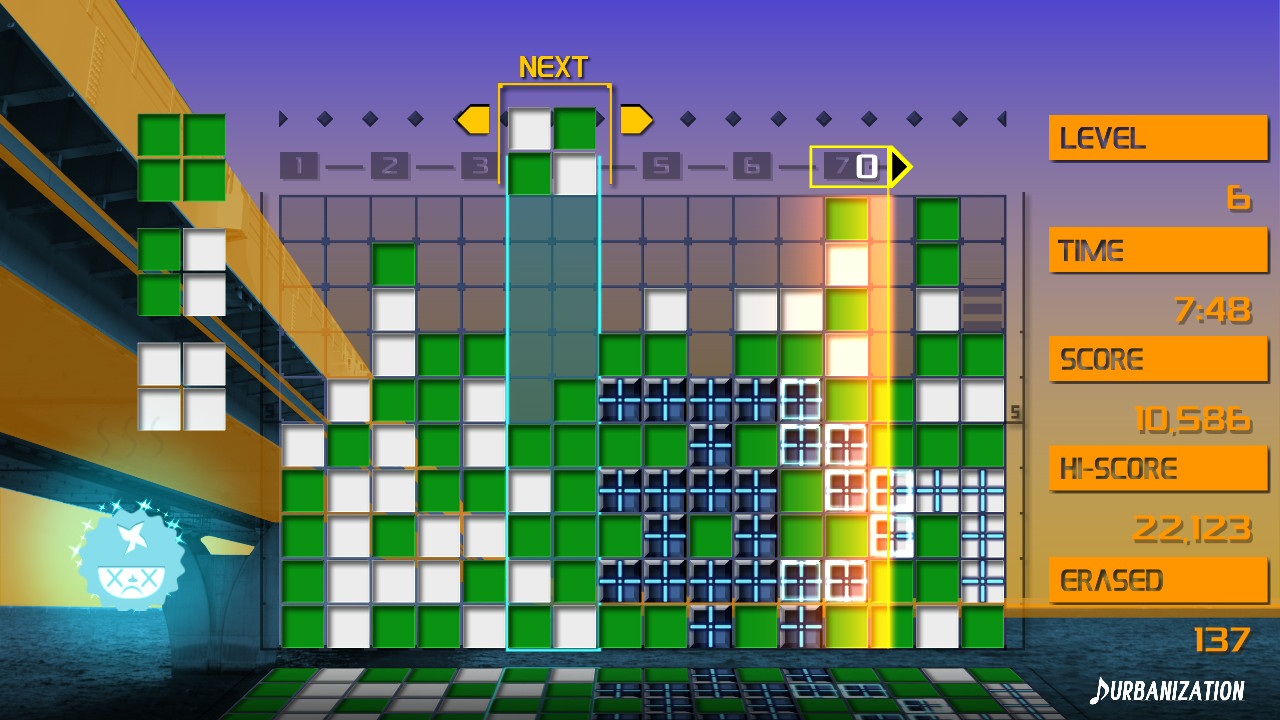 Above: A rare connector block lets you eliminate one color of touching blocks.

As simple as the game mechanics may be, they’re fun, at least in small doses. If you’re willing to invest Tetris-quality time in learning Lumines’s rhythms, at some point you’ll get good enough that you can lapse into a somewhat trance-like state with the music, light, and vibration pulses — but not at higher difficulty levels, where the blocks drop too quickly to relax.

If you get bored of the Challenge mode, a puzzle mode places a timer on screen while you attempt to assemble objects (such as a blocky-looking dog) using Lumines blocks, but it doesn’t offer great rewards for completing objectives. 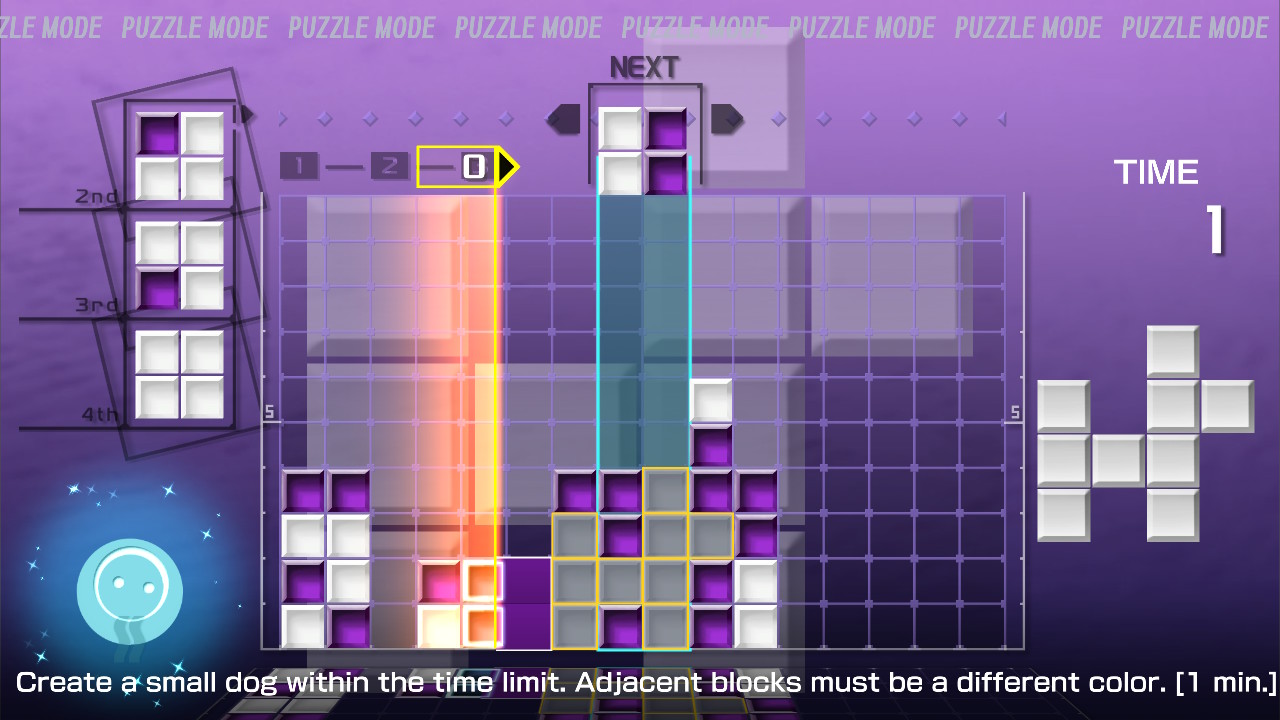 Above: Puzzle Mode challenges you to build the object on the left using blocks within a short time period.

A Mission mode similarly has you complete various mini-challenges, and a Time Attack mode sees how many matches you can make within several set periods of time. As a token reward, you can unlock bottom-left-of-screen avatars through some play modes.

One of Lumines’ biggest draws has always been its soundtrack, which uses electronica and lightly vocalized club music to create an early 2000s vibe. From the moment the game loads, your speakers or headphones will pulse with upbeat energy, punctuated by the sounds of falling blocks and making matches, plus light interstitial effects akin to DJ record scratches. Lumines claims to let you use sound effects to contribute to the music, but you’re at best a minor player in the audio mix, later gaining the ability to make an album-like playlist of your favorite tracks.

Since the gameplay doesn’t change at all apart from becoming faster at higher levels, Lumines’ key trick to preventing boredom is reskinning — replacing the background art, blocks, visual effects, sound effects, and music every time you reach a new level. Some of the skins are really nice, and interestingly animated, while others are flat and utterly boring. 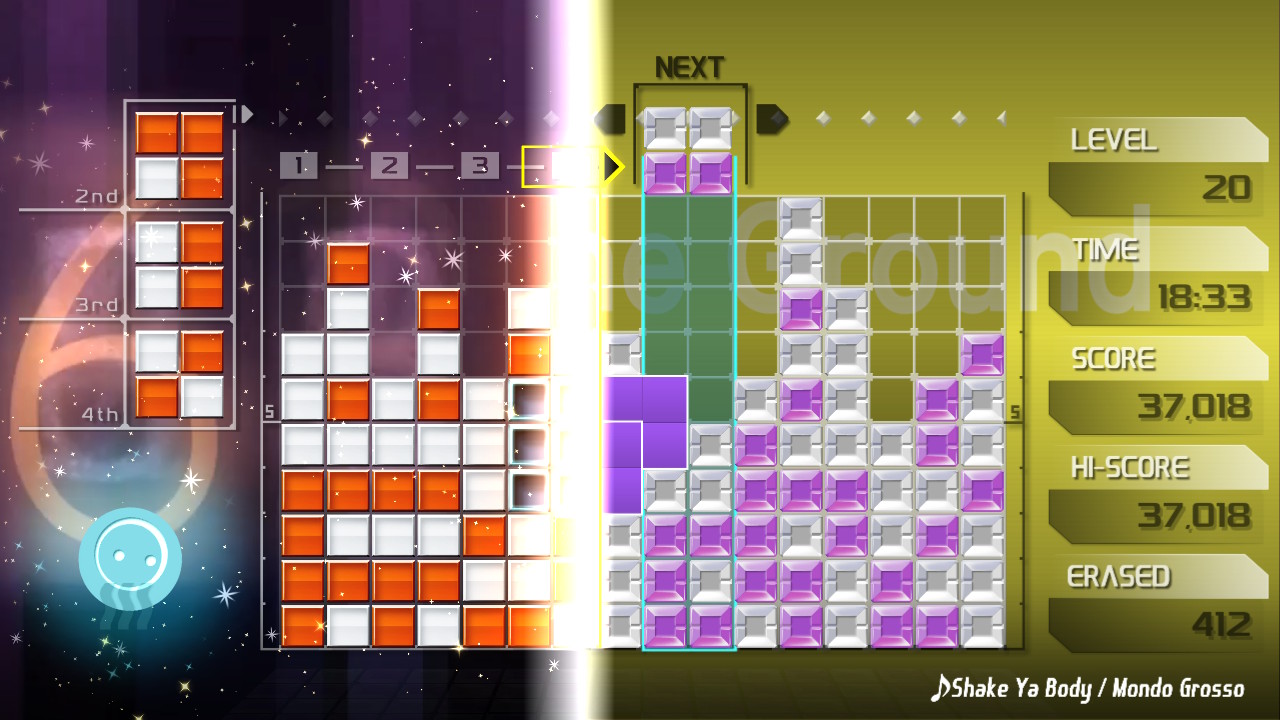 Above: A transition from one skin to another. Only the graphics and audio change during reskinning.

Lumines still sounds great 14 years after its debut, but there isn’t anything current- or next-generation about the visual content. It continues to look fine on a small screen, but on bigger displays, it’s fairly blocky — no pun intended — though admittedly better than it would have been without background remastering.

HD Rumble that will make your Switch squeal 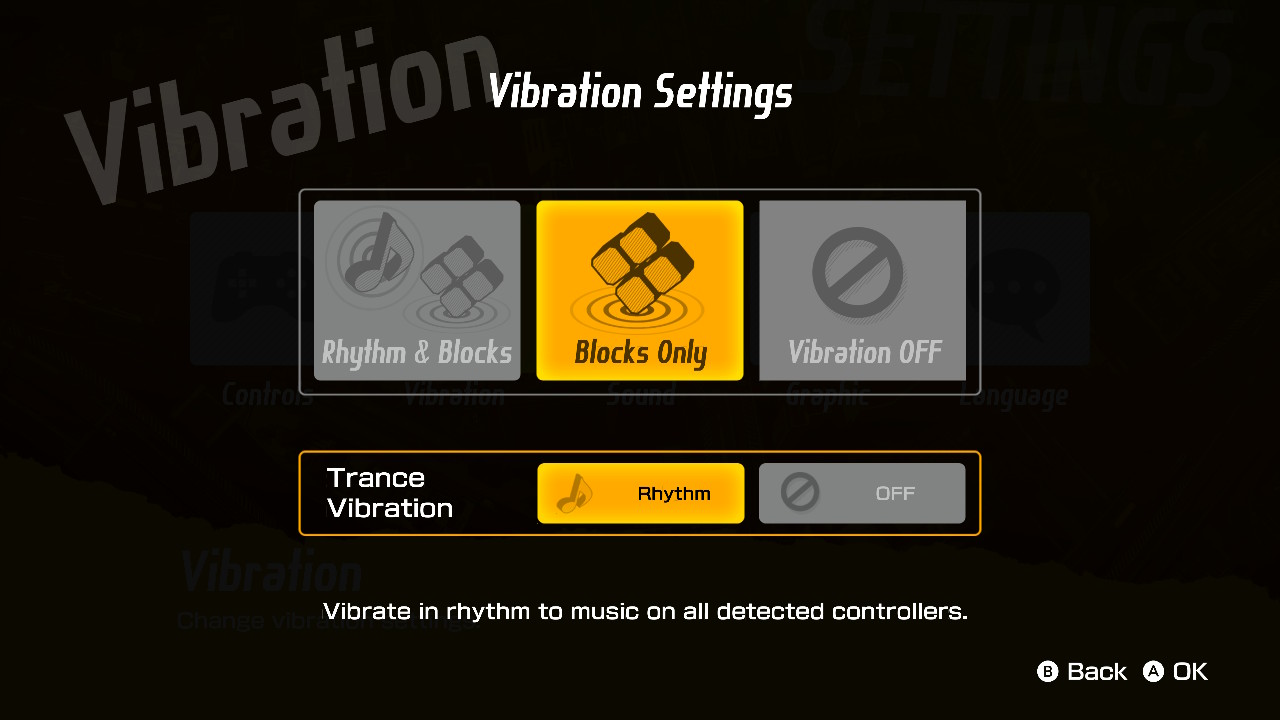 As a huge fan of Tetsuya Mizuguchi’s prior games, this is hard to write, but I found the vibration features in Lumines noisy enough to switch off. My Switch’s HD Rumble motors squealed as they attempted to mimic the beats of certain in-game songs, and other songs didn’t seem to be rumbling at all. Even the “blocks only” mode was persistently noisy in a quiet room, though thankfully not jarring for my hands.

On a related note, Enhance could improve the controller experience by letting the Switch’s joysticks move blocks in single-player mode. The game currently mandates the Joy-Con’s arrow buttons for movement.

It’s hard to call a puzzle game fatiguing, especially when you can technically put it down at any time, but Lumines Remastered’s skin unlocking system requires you to keep playing a single game continuously to unlock more music and backgrounds. There’s no restarting midway through the game at a save state, either — when you die, you go all the way back to the beginning. By around level 30, there’s a good chance of dying just because a misplaced block fell way too quickly, and it’s not always fun to go back and do everything again just to get to that point. 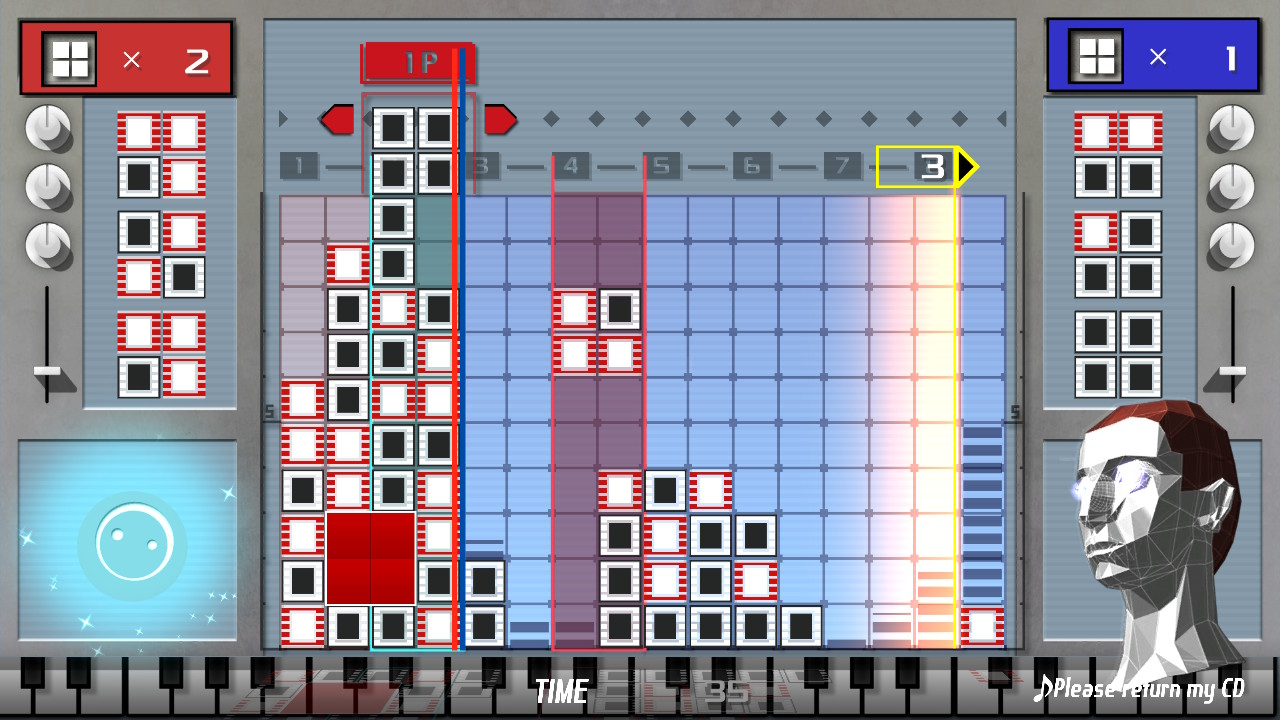 Above: See the red line? That’s player 1’s entire movement area in two-player mode. Making matches with these colors is awful, too.

By comparison with the initially chill single-player game, the two-player mode is unquestionably one of the most brutal I’ve seen in a block-dropping puzzler. The well is initially divided in half, with each player taking one side of the screen, and successful matches give you control over more of the well. Within minutes — perhaps seconds — one person will be so squeezed that moving blocks becomes impossible.

I didn’t find this mode to be particularly fun, and I wish there were more settings to adjust so that it needn’t become crushingly hard so quickly. You can earn some mediocre additional skins here as well, but best of luck getting beyond level five against the computer.

On the spectrum from great to good to okay or bad, Lumines Remastered is closer to “good” than “okay” — a fun but simple puzzler with atypically strong music and uneven graphics. Better as a short play single-player experience than in longer continuous stretches, it’s also more ideally experienced in handheld mode than on a big screen. 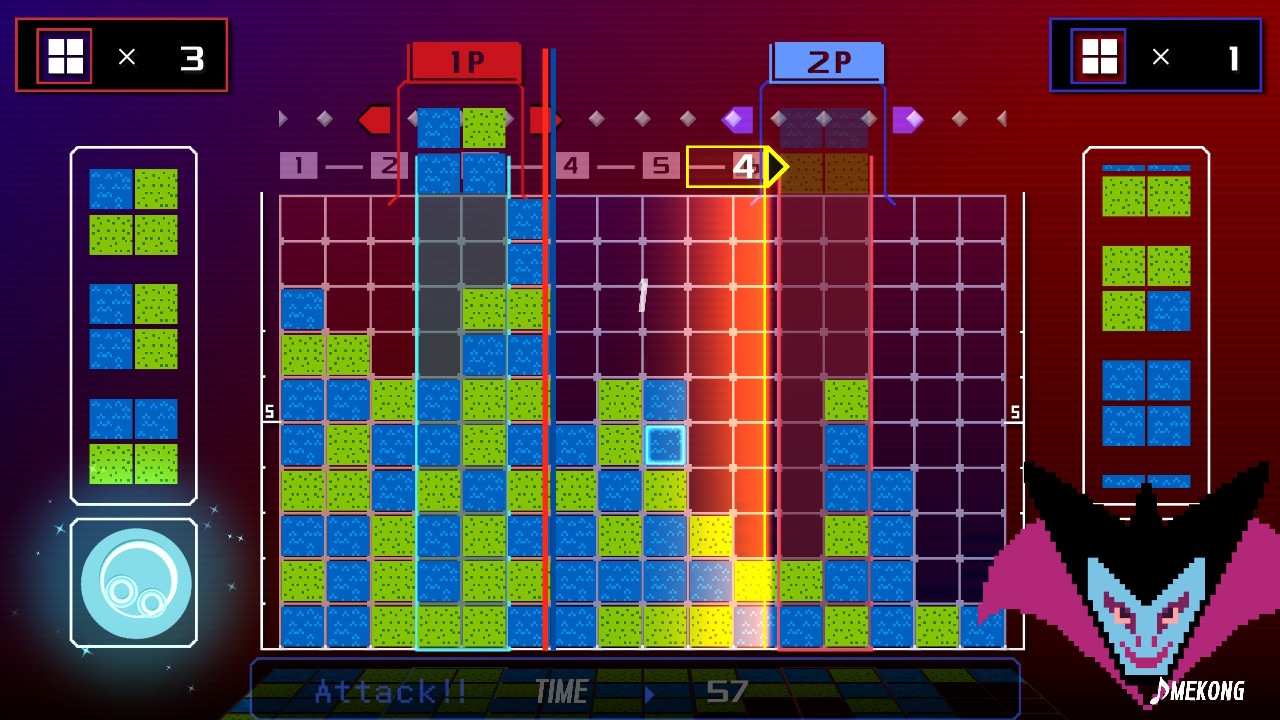 Above: Some of the unlockable skins are either amateurish or hard to look at.

Even though you can technically enjoy Lumines at a lower price on mobile devices, their smaller wells actually constrict the gameplay compared with wider console and computer platforms, and their soundtracks aren’t as compelling. If you want the full Lumines experience, this version’s reasonable pricing and interesting features nearly offset its remaining rough edges.

Lumines Remastered is available for Nintendo Switch, Sony PlayStation 4, Microsoft Xbox One, and Steam as of June 26. Enhance sent us a Switch code for this review.