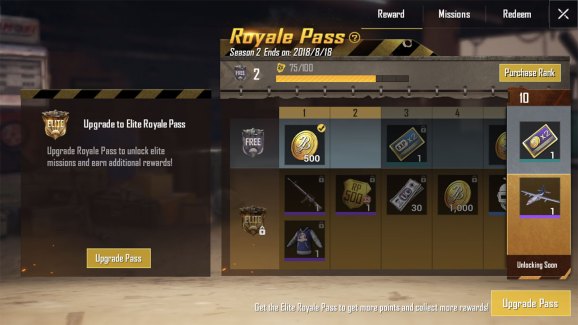 The Royale Pass in PUBG Mobile.

All anyone in the video game space was talking about for most of last year and the first half of 2018 were loot boxes, but it’s a different world now — a premium progression pass world. PlayerUnknown’s Battlegrounds on PC in the middle of its Sanhok Event Pass now, meanwhile PUBG Mobile introduced its Royale Pass last week. Both of these are optional add-ons that players can participate in to unlock cosmetic items until the event ends in about a month. They also each give you a chance to play to get a premium version that unlocks more cosmetics and at a faster rate. And that model has led to a 365-percent jump in spending for PUBG Mobile, according to data-tracking firm Sensor Tower.

“At present, we estimate that PUBG Mobile is now earning more than $700,000 per day in player spending across both iOS App Store and Google Play worldwide,” Sensor Tower mobile insights boss Randy Nelson said. “It has grossed more than $16 million to date.”

Sensor Tower arrives at its number by extrapolating from millions of data points including consumer behavior, so these aren’t precise numbers. But it definitely illustrates how something like the progression pass is popular with players.

“The effect of adding the Royale Pass can also be seen in the game’s revenue ranking,” said Nelson. “For example, before its launch, PUBG Mobile was typically ranked between 100 and 150 on the U.S. App Store’s top grossing iPhone games chart. After, it has remained in the top 50. That’s still well below Fortnite’s consistent top 10 ranking, but nevertheless a dramatic improvement.”

Fortnite is the game most responsible for starting this trend of developers embracing progression passes (although we’ve seen similar add-ons in massively multiplayer online games and Dota 2), and that revenue model has enabled developer Epic Games to generate $100 million from iOS alone through its first 90 days. That’s significantly better than PUBG Mobile, but now that publisher Tencent is embracing the event pass, it could continue to see its revenue numbers climb thanks in part to PUBG’s tens of millions of players.