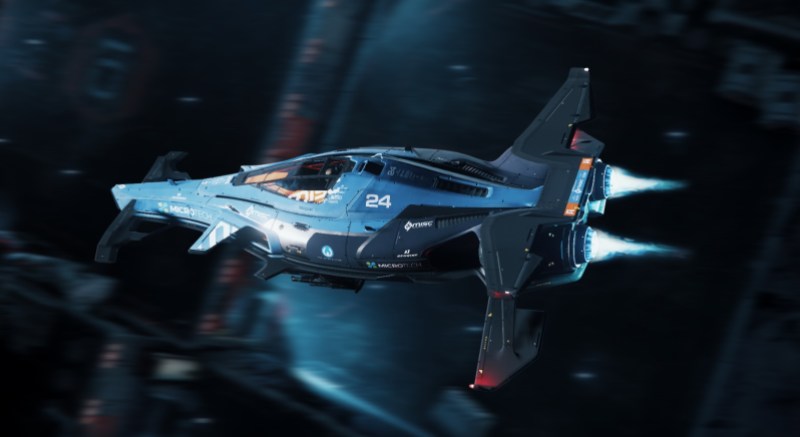 Above: A Razor ship in Star Citizen.

GamesBeat: You’re keeping the communication going. How do you think about the fans out there and the haters out there? They’re both very vocal groups.

Davis: It’s funny. We have a level of open communication, which I’m here for, and which I’m very excited by. With that level of open communication comes some pros and some cons, for sure. Everybody has something they want to say. We definitely listen to everybody and what they have to say, but for us—I take the cons with the pros. The communication we have with the people that are supporting us and the backers that are working closely with us — just the community at large, there’s so much positivity that comes out of that interaction.

When we did the 3.1 release, we went out to the community, a very rabid community that’s excited and playing a lot of our game every day, and we asked, “What’s next for you guys? We know what we think is important, but what’s next for you?” We did our 3.2 feature survey, and we want to continue not just that engagement on our core new releases, but just in general. The conversation with the community that’s out there and talking to us all the time, that’s almost directly embedded in our DNA. They have a direct line to all of us from any area. It’s been very positive to have that healthy dialogue. With the good comes the bad and we work through it. Even the criticism is always good to hear.

Roberts: What’s important to us are the people who’ve been generous enough to help us make this great game. That’s our community. These guys are passionate about what we’re doing. We’re working really hard to give back. Chris and I want to make the incredible huge set of experiences. We’re very passionate about listening to our community and working with them.

GamesBeat: As far as distractions go, is the Crytek lawsuit a distraction?

GamesBeat: Is quarterly updating going to happen pretty much forever? Are you finding that this schedule is ideal?

Roberts: We’ve published a quarterly plan on the website of what we’d like to get out to the community. We plan to do this every quarter. Sometimes we may adjust dates slightly, depending on if we have something we need to do differently, but basically, we want to do quarterly. We want it to be date-driven. We found that trying to do it in a feature-driven mode meant that we’d work to get a feature finished, and if that feature took an extra-long period of time, then we wouldn’t get anything out on a timely basis.

Now we’ve said that we’re going to work on a lot of features, and on a certain day we’ll cut off and get those features out to the community. Having the community see stuff on a regular basis and give us feedback is an important part of developing the game for us. 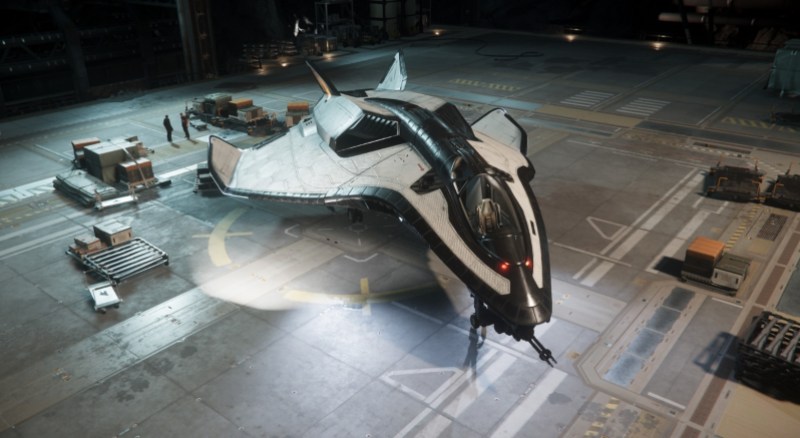 Roberts: Every day we’re blown away by what the community does with our stuff. They do things we couldn’t ever expect. The fact that 50 guys got in one ship and flew across the whole system, landed, and then decided to walk across the planet as group because the sun was setting — this is a system that we have, where planets are going to have a day-night cycle. And then they had ships above them protecting them, because one or two players didn’t know who they were. One of these players got a bit too close, so they took them out before they could strafe the people on the ground.

I was also watching a video of mining just now, which is a feature in 3.2. The guy was mining away, and then he turns to the guy standing next to him and says, “Let’s see what happens when I put the mining laser on this guy,” and the poor guy died. “Oops, sorry.” There’s loads of stuff people do as far as getting in ships and going places together. In atmosphere they’re jumping out of ships and skydiving down to the surface. In the early days someone took a big vending machine from one location, put it in the back of his spaceship, and flew it somewhere else. We never intended for that to work, but because of the tech, this great sandbox system we’ve built, he could do that.

Davis: We’ve seen people taking their buggies and trying to land them in the back of ships. We’ve seen a lot of community-driven events, like the rally that one of our organizations did. They’re planning in-game races and rallies just using the tech we’ve provided. From my perspective it’s been a lot of fun seeing what people do with this world, all kinds of things that we’ve never expected.

Roberts: Each of our worlds is huge. They take hours to traverse across them. But the ability to just get in a ship and take off and go somewhere else — another planet, a space station — you can meet people, do missions, so many other things. That’s right now. Obviously once we have more of these systems in place in the sandbox and get more players per instance — we already have a huge game there. The community is doing lots of stuff together while playing the game.

Sometimes you hear, “Well, once the game is finished…” But we’re finishing it every time we deliver something. We’re giving playable content to people. Then we take the feedback and give them more playable content. We’ll keep on doing this until we feel like, “Yes, this is a game we feel we can push out as a finished product.” 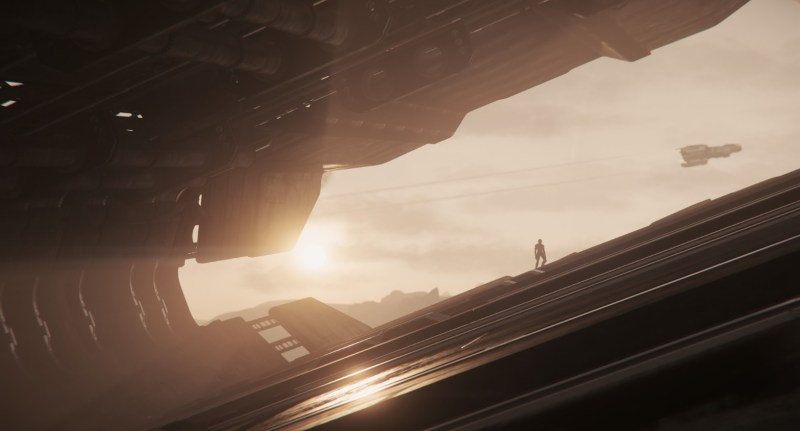 Above: A derelict Javelin ship in Star Citizen.

GamesBeat: Are these things that are happening in the game — does it remind you of some of the things you wish you could do back in the days of Freelancer?

Roberts: Absolutely. It’s one of the reasons why I left Warner Bros., where I was making the Lego games, stuff like that. We could never quite do this sort of thing back then. We wanted to do the cinematic stuff, tell a bit of a story, the sort of thing the Wing Commanders had later on. But this, now, with the tech we have and the power in PCs — if you go to YouTube now you can look at all kinds of content, which is not done by us at all. It’s all done by the community. You can see the visual fidelity of what we’ve built and all these incredible experiences.

GamesBeat: Is there anything else you wanted to make sure to mention?

Roberts: For me, this is the opportunity of a lifetime, a chance to make something absolutely amazing. We get to do it in such a special way. I love having the direct opportunity to work with the people who play the game. I’ve never had that before. In the past I’ve made games just wondering what people might like. Now we have the opportunity to get that feedback and know that we’re going to make an amazing experience, because people are enjoying it along the way.

It’s great for the team as well. We have 500 people working hard on this game now. It means a lot to people when you can see — they light up when they get to talk about what they’re doing, when they’re showing it to the backers. It’s a wonderful way of developing a game. We’ve been incredibly fortunate to have a lot of people who felt like they want this genre, who remembered the days of Wing Commander and that kind of stuff, who came on board to support us.