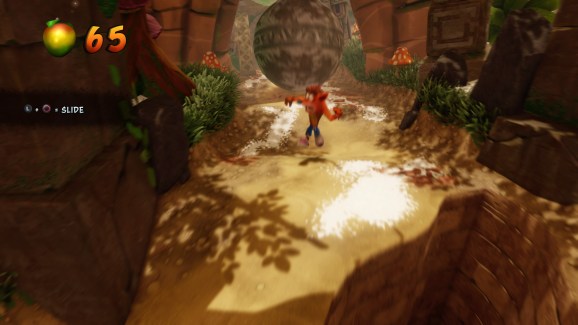 I’m old enough to remember the PlayStation ads where a man in a Crash Bandicoot suit showed up to yell at Nintendo’s headquarters. For someone who grew up alongside the console wars, those commercials had the effect of showing everyone how serious Sony was about taking on its console rival. Two decades later, Sony has dropped the mascot, which publisher Activision owns, and the jorts-wearing rodent’s first three adventures have made their way to Nintendo’s Switch and even the PC, which is somehow more odd.

Crash Bandicoot N. Sane Trilogy launched on the PlayStation 4 a year ago, but it hit the other consoles and PC today. I’ve spent some time with it, and it’s the same great update of those classic platformers that was one of last year’s fastest selling games.

I sided with Nintendo early in the 32-/64-bit era. That meant getting a PlayStation and Crash was out of the question because I had to min/max my birthdays and Christmases to get the most games for the Nintendo systems before I got too old to expect a lot of presents. As a result of this and the fear of missing out, I had to convince myself that I didn’t want to play Crash Bandicoot.

I’m less of a fanboy now (and more of a disgusting PC elitist), so the platform I’m playing a game on shouldn’t matter. It does, though. I can feel it while guiding Crash through Naughty Dog’s primitive 3D corridors. This was a PlayStation game and having it on Switch is wrong. I know that’s all in my head, but I’m not alone. GamesBeat reviews editor Mike Minotti has said the same thing, and I think one of the reasons the N. Sane Trilogy sold so well is because of its association with Sony’s gaming brand.

But even if it’s wrong, it’s the kind of wrong that makes gaming so much more dynamic and exciting today than when I was in junior high.These days, Microsoft can publish Minecraft on PlayStation and Switch, Nintendo and Microsoft can team up to highlight their cooperation in cross-platform multiplayer games, and Fortnite can enable people on PC, phones, and consoles to all play together at the same time. So yeah, I’ll accept Crash on other platforms … although, I may break down if we ever get to a point where Mario is on PlayStation.