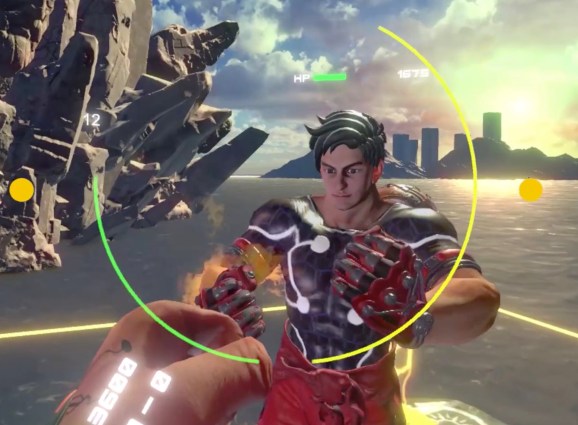 After two years of development, VFC looks like it’s off to a great start, placing HTC Vive and Oculus Rift headset users inside their choice of several fighters’ bodies. Looking through your character’s eyes, you see your hands as they’re gripping two controllers, using real arm and body motions to attack, block, dodge, and perform Street Fighter-style special moves. Unlike most fighters, VFC will actually give players a workout, and the game will track calories burned during each match.

VFC will also support full-body motion capture so leg motions and attacks can be used by combatants — a feature that may benefit players with real-world martial arts skills. But even with standard motion controllers, the virtual character’s moves can reflect the player’s real world gestures. A demo video shows characters doing Fortnite-style dances and warmup stretches based on player actions when they’re not fighting.

L&L requires VFC players to have an open six-by-six-foot play area and 360-degree tracking support. At launch, training, single-player campaign, and local multiplayer modes will keep players busy, but L&L’s goal is to turn VFC into a competitive VR esport, including online matchmaking and ranking.

Less than ideally, VFC is debuting with only a few playable characters and backgrounds. Balanced fighter Karl has a fire fist power, while Poison is a gas-wielding weirdo with healing powers, and “graceful trap master” Fala has electric discs and laser beam powers. Three initial stages include a futuristic beach, an urban arena, and a set of platforms hovering in the sky.

In the absence of a full VR one-on-one fighting game from the usual suspects — Bandai Namco, Capcom, Sega, or SNK, to name a few — L&L has a solid chance of building Virtual Fighting Championship into a legit VR esports contender through the Early Access feedback and development process. We’ll be watching for new character reveals and other major developments after the title hits Steam next month.