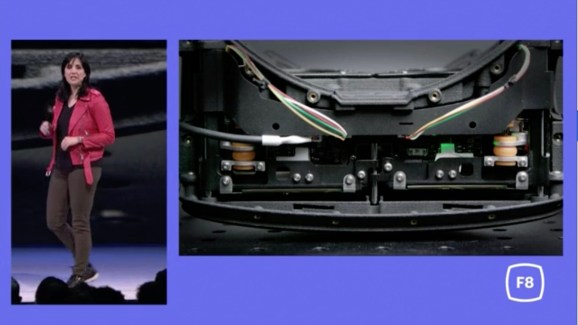 Varifocal moving screens inside of Half-Dome.

Last month, we reported on a talk by Douglas Lanman of Oculus Research (now Facebook’s Reality Labs) from the 2018 SID Display Week event. The fascinating 40-minute session showcased some of the team’s latest work in VR hardware. Now you can watch that talk for yourself.

Below is a direct feed video of Lanman’s talk, released this week. Over the course of the session, he talks about Oculus’ work with Varifocal Displays and eye-tracking to create even more immersive VR experiences than what can be seen now with the Oculus Rift. Around midway through, Lanman starts sharing videos of prototypes created over the past few years in the Research Labs.

It makes for a pretty fascinating watch and, eventually, leads to the Half-Dome prototype that Facebook first teased at its F8 conference last month. This new device has a massive 140 degree field of view with varifocal optics and more. We don’t know when/if we’ll see the Half-Dome released as a true successor to the Oculus Rift but hopefully we’ll have more to talk about at this year’s Oculus Connect developer conference. That takes place this September.