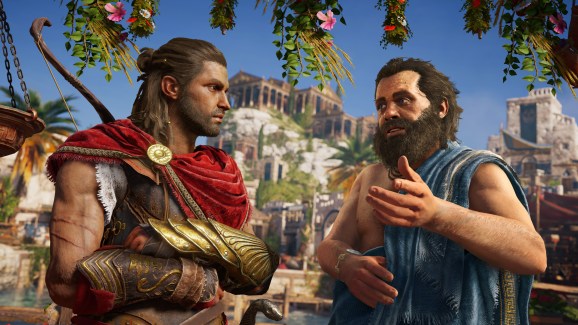 Socrates has infinite rhetorical loops to trap you in.

Your experience with Tom Clancy’s Rainbow Six: Siege never has to end, and Ubisoft is looking to bring that ongoing, long-lasting relationship to all of its games going forward. In an interview posted to its news blog, Ubisoft vice president Lionel Raynaud explained how the company wants to give players lots of smaller stories instead of one contained narrative that you finish and then forget.

This is part of the company’s move toward games-as-a-service, where it constantly updates its releases to keep players coming back for months if not years. But Raynaud explained exactly how a number of smaller stories better serve both Ubisoft and its players.

“What drove this is the will to not give finite experiences,” said Raynaud. “The idea was that you have this conflict, and the resolution, and then it’s finished – you’ve killed the bad guy, for instance. We build a strong nemesis, and the goal of the game is to kill him or free the country, we’ve done that a few times in our games. But when you succeed, you have to leave the game, because there is nothing else to do. So the goal was to break this, and say that you will be the hero of a region or population many times, not just once. And if you get rid of a dictator or an oppressor, something else is going to happen in the world, and you will have a new goal.”

Ubisoft talked a bit about this at the Electronic Entertainment Expo trade show in Los Angeles last month. The publisher explained that you cannot solve the world of Assassin’s Creed: Odyssey, for example. The world could always lead to new conflicts.

“This is why I talk about having several fantasies,” said Raynaud. “Not only being the hero who’s going to free a region, but maybe also the fantasy of having an economic impact, of being the best at business in this freed country, or even having a say in how it should be governed, now that you’ve gotten rid of the dictator. And I think we can have several different experiences with different game systems in the same world, if the world is rich enough and the systems are robust enough.”

Of course, Ubisoft will have to deliver those robust systems and settings, and it will also have to ensure that players are satisfied with many smaller stories instead of one larger one. But if it does, it could find a way to move even something like Assassin’s Creed into something closer to a live service.