I’ve played about eight hours of Octopath Traveler, and I have mixed feelings about Square Enix’s first role-playing game for the Nintendo Switch. It looks beautiful. The combat is creative and satisfying. And its story structure is unique yet … offputting.

Octopath Traveler comes out on July 13. It features eight characters, each with their own stories and abilities. You start by picking any one of them. After you play the first chapter of your starter hero’s story, you then begin to explore the world. Your first mission is to find the other seven characters.

This part of Octopath Traveler is formulaic. You go to a new town and meet one of the heroes. You then get a barrage of story sequences that send you to a dungeon. Beating that area’s boss begets more cutscenes that explain this character’s motivation for exploring the larger world.

You do this eight times. Each character is the star of their own story. You spend a bit more than an hour on each of these introductions. You get to know a character and their plight, but each story is put on hold as you go out and recruit other heroes. 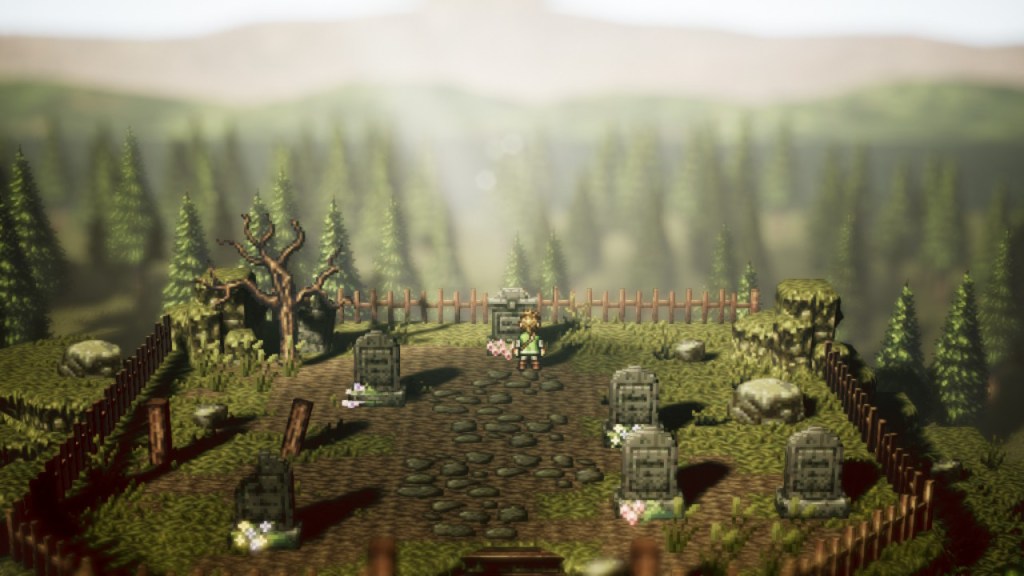 Above: You aren’t a real JRPG hero unless you talk to your parent’s grave.

Typical stories have a three act structure. You know — beginning, middle, and the end. The first 10 hours or so of Octopath Traveler is like a parade of only first acts. Just as you become invested in one story, you suddenly jump to another. Like I said, I’m eight hours in, and I’ve only recruited six of the eight heroes.

And these stories, at least in these first chapters, never mingle. Since any character can be your first, each one has to proceed as if it’s a solo adventure. So, if you go up to a new character and you already have a party of three adventurers, your previous heroes will show up in battles, but they have no impact on the story.

So far, this feels disjointed. The weirdest example came when I was recruiting a thief. His introduction story included a bit where he rejected others who wanted to join him on his latest job, saying he works alone. But then he accepts the help of my party. Keep in mind that this is a party that includes a priestess, a scholar, and an honorable hunter. These three suddenly decide to help a thief steal something for pure profit.

Right now, I want to know if these stories come together. Each character has a specific goal, and they don’t overlap yet. When I move on to the second chapter of a hero’s story, will the other party members will be involved? I hope so. That’s what makes RPG characters memorable. It’s the interactions. The entire party becomes an entity. Right now, this cast feels like a group of adventurers that never talk to each other, like a bunch of random people doing an MMO dungeon together. 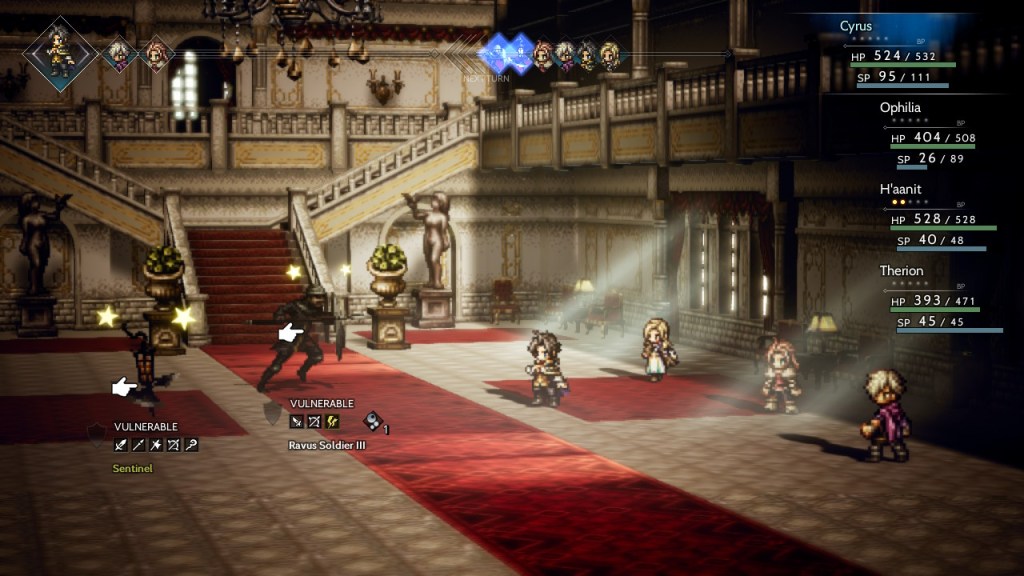 Above: Heroes going on an adventure to steal something for profit.

But I’m still having fun with Octopath Traveler. The combat system is wonderful. It’s like a mix between Shin Megami Tensei’s focus on exploiting enemy weaknesses with Bravely Default’s methods of having characters perform multiple actions a turn. You have to plan things so that enemies are vulnerable when you can deal the most damage in a single turn. Even regular battles require strategy, and boss fights can be challenging and exciting.

I’m also in love with the way Octopath Traveler looks. The game is like some kind of JRPG shadowbox. Like someone went to Hobby Lobby to make a JRPG, if that makes any sense. And the pixel-based designs for the characters do a great job of conveying detail while keeping the classic JRPG aesthetic.

Hopefully the story comes together, but 10 hours is a long time to spend on introducing the cast.