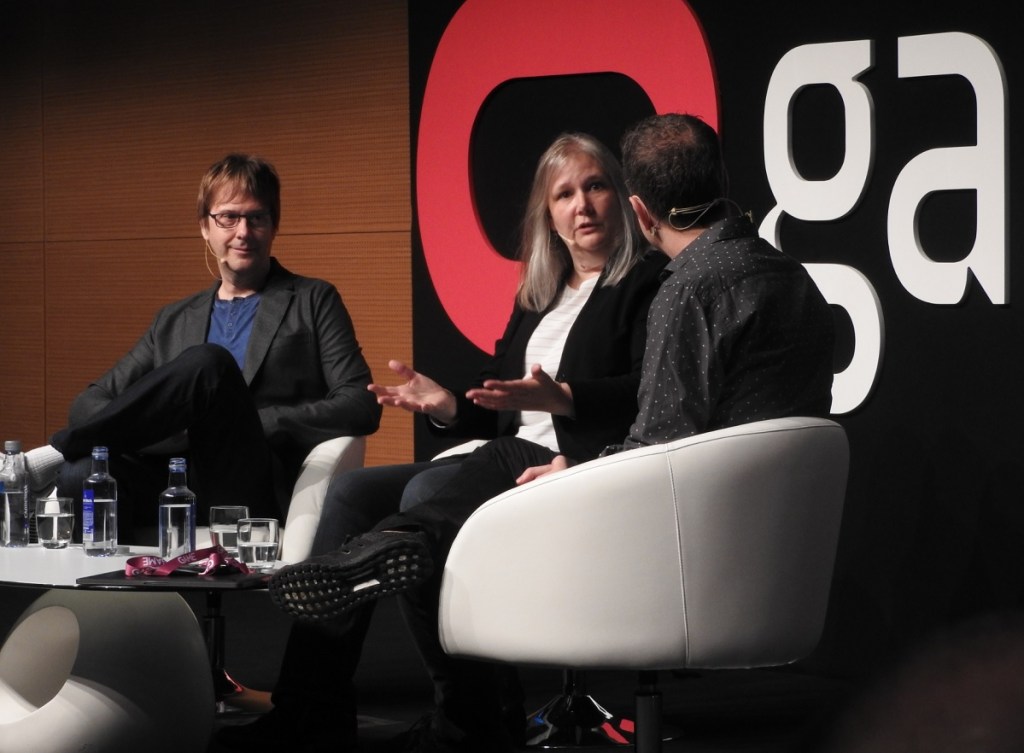 Keighley: As Amy was saying, games were getting more complicated. There was more dialogue and world-building around them. Especially with Crash, I think everyone knows how you helped Naughty Dog refine that game. When you finally got to work together, it was on Uncharted. In many ways, Mark was — was he working for you as a consultant, Amy?

Hennig: It’s all kind of a blur.

Cerny: I was doing odd jobs. One of those odd jobs was, our level designs were so far behind. I was trying to figure out how to get everything done.

Hennig: The crazy thing is, on Jak III — when I joined I was the third designer. Dan Arey was there. He was the writer and creative director on the Jak series. Hirokazu Yasuhara, who was the real level designer….

Hennig: No, not when I joined. When I joined for Jak III, Evan was transitioning into a co-president role. I joined when Andy Gavin and Jason Rubin were still there, but they were transitioning out. Jason was there for the first year I was there, because he was still working on Jak III, as was Andy. Andy stayed on another year after that. But to work on Jak III, it was Dan and Yasu and me, plus Evan with whatever time he could spare.

Yasuhara was an amazing designer, but he did everything on paper. You’d worked with him before on Sonic. Figuring out — there’s always been this interesting transition in games. We used to do everything on paper because we had to, and then eventually we started doing white boxing. I miss paper mapping, because you interrogate your ideas a different way than you do in white boxing.

Cerny: It’s good, but it’s hard to make these levels.

Hennig: It’s very hard. We had to put meter-high level markers on all the floors. You can imagine that–one of the first things we worked on for Uncharted was this fort. This multi-layered space with interiors and exteriors. How do you map that out and represent that on a piece of graph paper? It was really when we were having to transition into thinking about how to gray box or white box things. But yes, you were very helpful in trying to figure out level design.

Cerny: This was actually my first experience working with a creative director. You were called the game director. It was interesting. We level designers — you would come and explain what it is that the goal would be. This level should look like Piranesi, the famous architect. We’d go and look at books and try to come up with a level that looked like Piranesi. You’d come by and shake your head and we’d go back to look at books again.

I used to wonder, why is Amy mad? And it wasn’t until I became a creative director myself that I understood the curse of being a creative director, which is this: you have the vision for the game. You know what it is you want to be making. You explain it to someone. If they get it instantly, you’ll never see that person again on the project, because you don’t need to communicate. The brilliant people on the project who are — realistically you’ll see them three times in the course of the game. If you have a masterful UI designer and you can explain the vision, you’re done. You spend your time almost exclusively with the people who don’t understand what you’re trying to do. That’s the load you bear. And so we just didn’t get it.

Hennig: That’s definitely true. I’ve said that before. You can compare it to being a parent, which is a weird analogy. The good kid doesn’t get any attention. It’s the bad kid that gets all the attention. I don’t mean to have a positive or negative charge there, but trying to work through with people that are having a harder time, you feel like you’re neglecting all the people who get it and they’re off and running. The important thing there, too, is that you’re doing your job right. You aren’t dictating to people what to do. 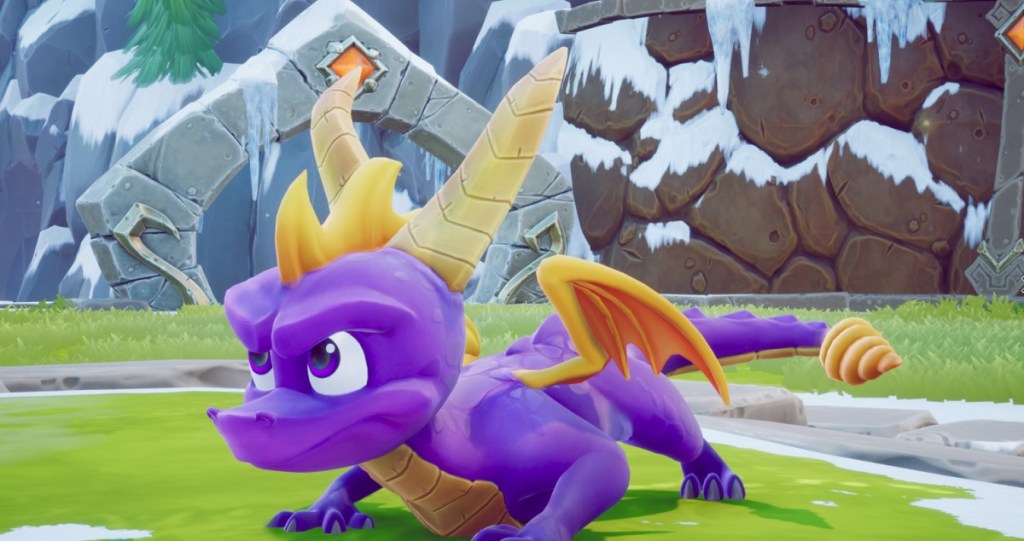 Above: Spyro the Dragon is coming back. Mark Cerny worked on the original.

Cerny: A lot of people say they want to be the creative director, but what they mean is, they want every idea they have to be what goes into the game.

Cerny: That’s exactly not what a creative director is.

Hennig: A lot of people come to me and say they want to do what I do. Sometimes I look at where they’re at and what they aspire to, and my only question is, why? Tell me what you think that means to you. Inevitably it has something to do with having control. And of course that’s when we laugh, because the job is the opposite of that. You have to get comfortable with giving up control. If you white-knuckle it too much, if they can feel your hands on the reins — some people can make good games that way, so it’s possible. But I don’t subscribe to that perspective, that way of being a director.

What you want to do is give people enough rope to hang themselves, really. Describe the idea and let them surprise you by elevating it in a way you never considered. You’re “yes, and”-ing each other, basically. It’s improvisation.

Keighley: You’re setting up the parameters of what a level is going to be, but you’re not saying, “And then Drake is going to turn left and this happens.”

Hennig: That would be too specific. The analogy would be, they say that as an art director you shouldn’t try to hold their pencil. A conductor of an orchestra isn’t trying to play all the instruments. You’re trying to shepherd this thing into existence. Same thing working with actors. You don’t give them line readings. You hire them because they’re going to interpret the work and elevate it and surprise you.

In its best form, you are in control. It would be disingenuous to say we don’t have any control. Of course we do. But the point is it’s a shepherding kind of control, which can be very difficult and frustrating. The people who usually say they want creative control, it’s coming from a place of frustration. You know they would be white-knuckling the job, as opposed to saying, “I want to be able to inspire and shepherd something into existence.”

Cerny: When I was saying you might only see that brilliant UI designer three times, it’s not because exactly what you’re thinking has ended up in the game. It’s because you look at it and say, “That’s not what I was thinking, but it’s better.” Hopefully it’s better, but you settle for it being something that’s good and in the same general direction you were thinking of.

Hennig: It takes a level of humility. I’ve always said that. You have to have enough humility to say — in your head, not out loud — “That’s not what I would have done, what I was picturing, but is it better than my idea?” If so, awesome. Is it just as good, even though it’s not what I was picturing? Then that’s fantastic, because they have a sense of ownership and passion. If it’s not as good, you have to have enough ego to say, “Here’s the reason I asked for it that way. Here’s a correction.” And have the presence of mind – because we’re all human beings with flaws – to not react the wrong way in the moment.

It can get your hackles up, right? If somebody seems like they’re defying you or deliberately misunderstanding you. Sometimes your first internal reaction is to say, “Why are you not doing what I asked?” But you have to stuff that down and say, “Actually, what they’re doing is fine. It’s better than what I was thinking.” Especially with actors. In the moment, if they do something, you have to realize, “That’s brilliant. That’s better than what I wrote. Let’s do that.” Not have ego tied up in it. 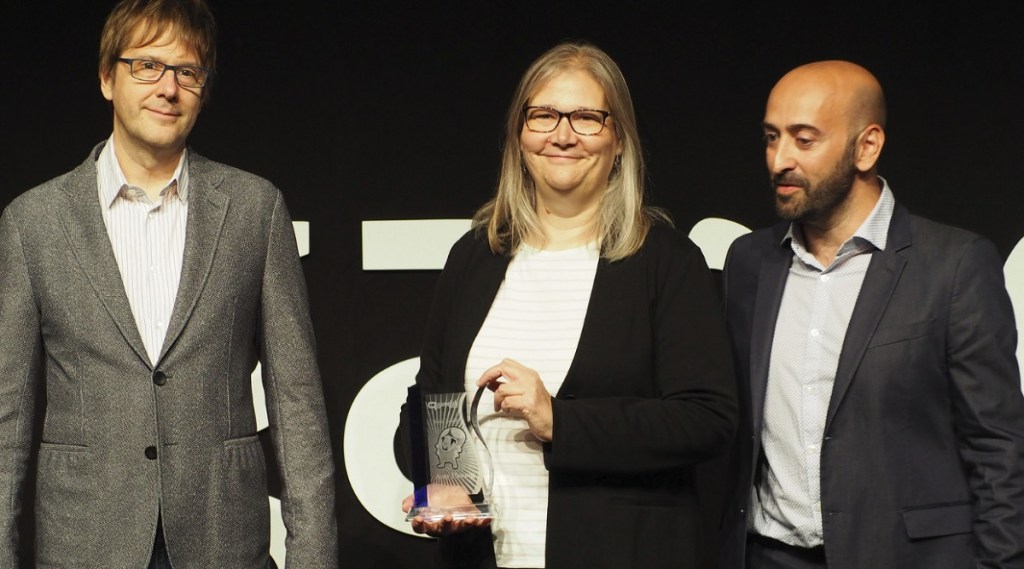 Keighley: Mark, I’m sure you’ve had many of those moments.

Cerny: Have you ever given a line reading?

Cerny: That’s a tricky one, right?

Hennig: But you have to know when to do it. Every actor is different.

Cerny: When do you do it?

Hennig: Not right out of the gate. If they’re not getting it, usually you’ll say, “Do you mind if I give you a line reading?” Most actors will say, “Of course. That’s fine.” At that point, you’ve earned their trust, hopefully. But you have to let them fail first. Also you have to make sure you’re not giving the line readings where you’ve written it in your head a certain way and — then you don’t want an actor. You just want a puppet. You don’t want a partner. I’ve very rarely given line readings. It’s usually because there’s something that’s unclear and they’re not quite getting it. It helps them to go, “Aha, got it, thank you.” But again, you don’t do it right out of the gate.

Cerny: Do you ever have a moment with actors when you’re thinking, “My God, this is so much better than what I wrote?”

Hennig: Of course! Every time.

Cerny: You probably have that less than I do.

Keighley: Translating back to level design, I’m sure there were moments on Uncharted where the team would come back with a level and….

Hennig: But that’s what you want. You want to say, “Okay, here’s the goal. Here’s the start. Here’s how we end. Here’s some of the turns we have to have in the level, the story moments we need to get in there.” And then ideally the designer comes back with something like, “Holy crap, I never even considered that. It elevates what I was imagining. I’ll go back and write my stuff differently.” If I haven’t shot it yet, that’s great, because what you’re doing informs that.

The best example of that, talking about Neil for instance — one of the things he worked on in Uncharted 2 was the Nepal level. Some of the stuff we showed at E3 was the whole helicopter chase, the building collapsing. A lot of that was his inspiration. And really, a level like that, you might just say, “Here’s what happens in the story. We come to the level like this. And we need to end like this. We need to have a downturn right here.” The designer will say, “Got it,” and if they’re somebody like Neil they’ll turn that into something you never considered. It probably wasn’t in scope, but you just say, “We gotta make this work, because it’s awesome.” When we write those scenes and shoot them, it’s now informed by these things you never thought of.

What you have to keep in mind as a collaborator — that’s why we get very uncomfortable when it seems like we’re getting singled out. We as game developers. It seems trite to say so, but it’s a group effort, a team effort. So much of it is being in the right place at the right time with the right people and the right ideas. It seems wrong for any person to be elevated like you’re the author of this thing. You can’t even remember sometimes whose ideas were what, because it’s this big messy wonderful process.