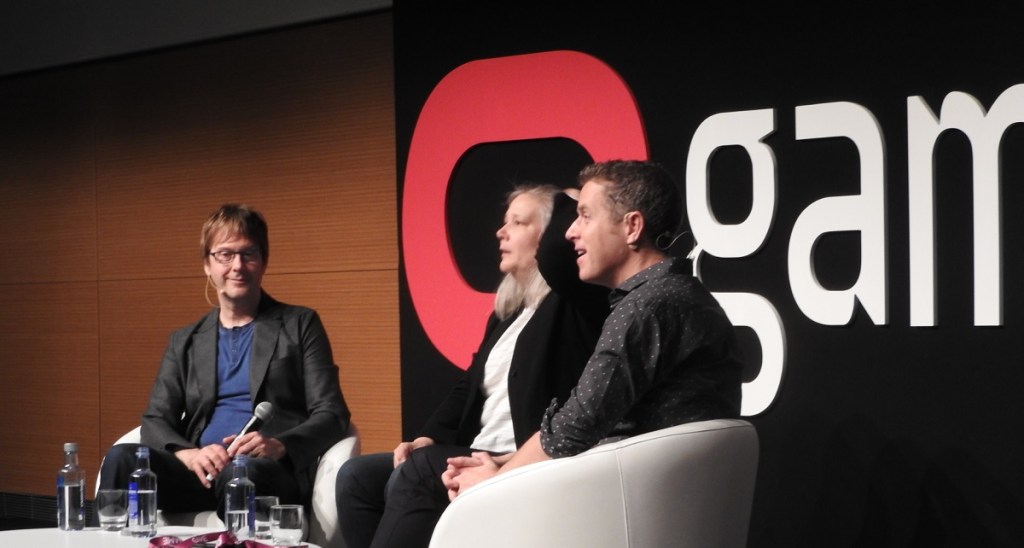 Hennig: Yes, it is. “I don’t think that was my idea. That was somebody else’s.” You do your best to give credit where credit’s due, but part of it is acknowledging that it’s this messy organic thing and that’s what you want. Same thing with the actors. Sometimes I remember an actor saying, “How about if I do it this way?” And it’s such an elevation. It sticks in your memory. But most of the time we’re all sitting around with the pencil out thinking about whether to change the blocking here or there. They always say good ideas can come from anywhere. You have to be open to it.

Cerny: How do you reconcile having something like a six-month-long pipeline between actors on stage and getting stuff in the game, with all the iteration?

Hennig: You mean like if you’ve already shot a scene?

Cerny: Yeah. I think that’s something people struggle with. There’s this weird thing. The notion is, game mechanics, those will change even weekly. You’re always trying to find your game. But the storyline is something that somebody came up with and you just shoot it and you’re done.

Hennig: Well, this is the crazy thing about what we do. I’ve talked to some folks here about this. Nobody understands that we don’t shoot it anything like a film. It’s not like you have a pre-production process, then a finished script, then you shoot that script, then you just insert it into the game. The point is that, like everything in game development, you’re in pre-production, production, and post-production all the time until you’re done.

It’s a messy process. With the writing, we don’t have a script. We have a treatment. We have an outline. Then we write — anyway, the way I’ve done it, the way we did it at Naughty Dog, you write one scene at a time, out of sequence. You shoot that stuff out of sequence over the course of a year. You write just before you shoot, because the game is changing so much underfoot. That’s the only way you can stay as accurate as possible.

Keighley: Is there sometimes a tension there? You can’t do this because this is how the scenes connect up.

Hennig: Sometimes we can bend around that, and sometimes, well, we already shot that scene. We had a couple of examples we’ve used in the past in Uncharted one. Sometimes things get broken. We had this little quiet scene between Drake and Elena after the whole jeep sequence. They’re supposed to swim for it, then stop and take a breather in this quiet scene.

The designers decided that was too boring. From where you came out of the water to where the scene happened, there was nothing happening. So they put a combat event in there, which completely changed the tone of the scene. You’re murdering these guys, and then you sit down and have a sweet little romantic moment. I’m like, “Oh, guys…” But, well, gameplay’s gotta win. You can’t win them all.

There was another time in Uncharted 2, because we were trying to scope the game down, as you do–in the museum, after you’re betrayed and you have all the guards coming after you, there was some discussion as to whether we could cut that whole escape sequence out. We could just get on with the game. Maybe it was extraneous. And I said, “We’ll have 20 minutes of cutscenes back to back if we do that.”

Again, it’s this holistic back and forth all the time. Sometimes story has to win. Sometimes gameplay has to win. Sometimes they don’t quite connect, but you do your best. I’ve had scenes where I shot it and then we needed to change — I know what it was. In Uncharted 2, I had to rewrite the whole scene and ADR over the scene we’d shot to change the context to fit what had happened. We have to do all kinds of creative stuff. You base your decision on where you are in production. How finished is the scene? How malleable is it? And sometimes you just let things go, like romantic scenes after a gunfight. 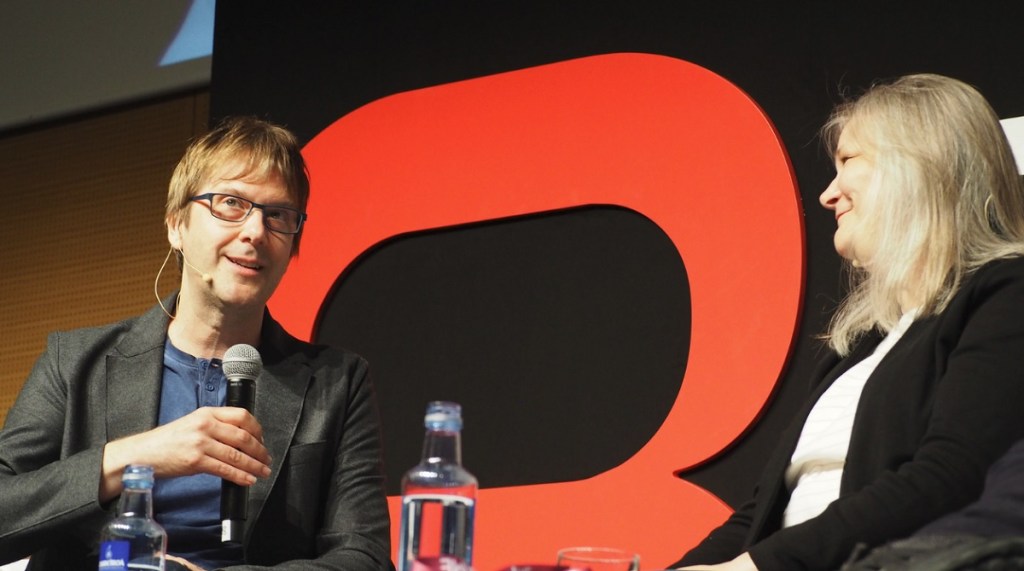 Above: Mark Cerny and Amy Hennig talk about the good old days at Gamelab.

Keighley: The fact that you can do that, that’s what makes games so special. Like Mark would say, you have to be able to iterate. You have to be fluid. People are playing and evolving these levels. That’s important. How much, for both of you — as a creative director, how much do you focus on the nuts and bolts of the mechanics? How it feels in the controls and the system.

Hennig: A bit? It depends. Some more than others. If the game’s not fun to play, we all lose. I would say the creative director, along with everyone on the team, is playing the game and saying, “This isn’t there yet.” If the player’s not having a fluid experience, they’re not going to appreciate the story that’s happening around this stuff. We’re all responsible for gameplay.

Keighley: Iterating on gameplay and level design is a big part of what you do, Mark, and the kind of world-building Amy does, you’re now focusing on that too as a creative director. Tell us a bit about that tension and how you position your time on a project.

Cerny: I have a plan for how I’m going to spend my time, and yet really, things come up and they get dealt with. I know that doesn’t sound very sophisticated. You’re creative director, but there are these issues with gameplay mechanics — technically that’s the game director’s job, but you still have to talk it through, if it’s not the best stuff. I love this phrase. I heard it for the first time yesterday. “A bad game is bad forever.”

Hennig: The creative director and game director are very overlapping roles. It’s just too big of a job anymore for one person.

Keighley: Do you have a creative director, and then someone who’s more focused on gameplay, and those are separate roles?

Hennig: Yes, but they overlap so much. They can go right up to each other’s boundaries. You don’t expect that the game director has no opinions on the story and is not participating in that. It’s just that you agree on what that is and you have to break up and say, “I’ll go write that and shoot that. Maybe I’ll make sure the concept art matches up.” And they say, “Great, I’m going to make sure the mechanics we’re talking about get prototyped. I’ll make sure the level design honors what we just said and doesn’t go a different direction.”

Keighley: Is one subservient to the other, though?

Hennig: It depends on the team. There are situations where somebody — there might be more hierarchy based on experience, but ideally you’re partners.

Cerny: I haven’t seen any real division there. Just the belief that it is more than one person can do. That’s why it’s divided between two people. If one person is trying to everything related to directing the game, wow. You need a solid structure in order to do that. You need that project to be run like an army, if that one person is going to be able to communicate all issues related to both creative direction and gameplay.

Keighley: As games get bigger in scale — we talked about the early days when it was a couple of people. Now it’s not necessarily about the design document, but how much of it is a challenge around managing teams and projects of this size, the structure that’s vital to these things being cohesive?

Hennig: It’s interesting, looking at Naughty Dog. We never had producers in the traditional sense. We always resisted that. Again, not that there’s anything wrong with producers, but there’s lots of cases where too much of that inhibits risk-taking, which is absolutely necessary to what we do.

And so I think one of the challenges we face, as teams have gone from 30 people to 100 to 200 to 300 to whatever Ubisoft is at — it requires more structure. It requires that your leads in your disciplines are basically producers too, ideally. It’s a lot more important to make sure the vision is communicated, especially now that we have so much distributed development. We don’t do it all in one place anymore. We can’t.

Cerny: There’s this terrible moment in your career — we started when the teams were small. And then one day you have a project and there’s somebody on your project who you run into in the halls and you don’t know their name or what they’re doing on your game. Talking about distributed development, to say that is even naïve. That’s just your local operation. You may have a branch office in Singapore contributing to your game.

Hennig: Or multiple branches, because you have outsourcing. You have external partners. It’s a lot to juggle. You either have to have very informed producers who understand the discipline that they’re producing, or you have leads that are very organized. That was the thing at Naughty Dog. The leads really spent half of their time planning and organizing their tasks, making sure things were getting tracked. Which is a shame, because you want them spending all of their time on their craft. But we had always felt like that was a good tradeoff, rather than introducing a lot of overhead and management structure.

Keighly: Mark, your philosophy of rapid iteration — as teams get bigger, it’s that much harder as the game sort of gets away from you.

Cerny: It’s much harder. I was thinking the other day, because we were building a new prototype, and in the time it takes to do a prototype now, we would have done two vertical slices on two completely different games. You could do a vertical slice in six weeks, if you go back far enough.