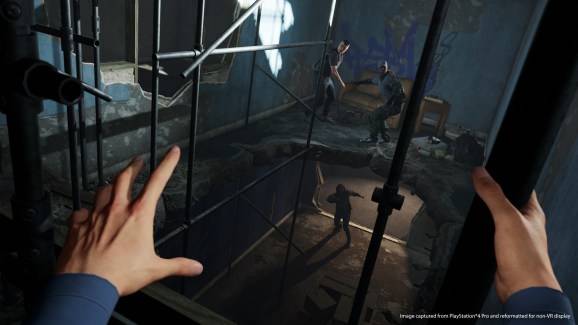 The lead designer of Sony's Blood & Truth for PSVR predicts major changes in VR over the next 5 to 25 years.

Following its release of the first-person criminal underworld experience The London Heist for PlayStation VR in 2016, Sony’s London Studio has been working on the highly anticipated shooter Blood & Truth. But its lead designer believes even bigger VR advances are on the horizon. Speaking at the Develop: Brighton conference (via MCV), Michael Hampden offered predictions for the next 5, 10, and 25 years, saying that VR will soon become more compelling — and then ubiquitous.

Over the next five years, Hampden said to expect a handful of developments, most notably that “one new genre of game will be born, one that will only be possible in VR.” Many VR titles today are ports of non-VR titles, but Hampden suggests that new games should be designed from the ground up for VR. He advised developers to start by understanding why they selected VR as a medium and then differentiate their experiences using VR “presence,” surround audio, distinctive input methods, and head tracking.

Part of the five-year process will include creating both consistent and user-customizable interfaces for VR games. Hampden expects that a consistent design language will be established for VR, and that developers will learn how to use customization — including controller and movement options — to reduce motion sickness and improve experiences for sensitive players. As a result, the next five years will see VR gain true killer apps, and become more popular in both the mobile and medical sectors.

By the 10-year mark, Hampden expects that haptic feedback will be part of the VR experience — and “a game changer” as users will be able to feel objects down to the texture level. This will make VR experiences more immersive, and enable further “new genres of VR games to emerge.” Then, 25 years down the line, he expects that “VR should be as ubiquitous as smartphones are today.”

Interestingly, Hampden also reinforced a point that has been made by other tech companies recently: Despite the decline of brick-and-mortar retail, physical stores are becoming critically important in winning over customers. “It’s really hard to get across how the VR experience is actually going to feel with the headset on,” Hampden said. “It’s not as simple as putting a video out there and then you know exactly what our game is like in VR. It’s a very different thing to see it and to actually feel it and to have that presence in VR and be inside that experience.”

He said that the solution is demo stations at retail shops. “If you can actually play a demo of something, it can actually give you that sense of understanding the game and you’re going to buy it.”

Unfortunately, VR demo stations remain very hard to find throughout the United States. But Hampden noted that arcade-style VR destinations are on the upswing as developers pivot from room-scale home experiences to location-based VR, resulting in “powerful” games like Star Wars: Secrets of the Empire that people love and will pay to play. “We have a limited number of these experiences out there so far, but I think this trend is here to stay, and we’ll see more and more location-based VR coming in the future.”