Few entertainment properties are as ubiquitous as The Walking Dead. Everyone knows about the show, most of us have seen at least a few seasons, and the absolutely immense popularity of zombies across the world owes a lot to AMC’s hit series based on Robert Kirkman’s iconic comic book series.

Today, The Walking Dead: Our World releases on iOS and Android as the latest endeavor for the brand, but this time it’s something a bit different. Our World is a location-based mobile AR game a lot like Pokémon Go that tasks players with roaming the real world, completing events, collecting items, and ultimately taking down zombies. Using your phone’s camera it can even superimpose them onto your surrounding environment quite convincingly.

Next Games is a mobile game-focused developer that’s most well-known for previously collaborating with AMC on this same property to release The Walking Dead: No Man’s Land, a tactical RPG with tens of millions of downloads. Now the studio has been tasked with capitalizing on the mobile AR-hype, primarily fueled by Pokémon Go’s and Niantic’s continued success.

If you’re reading this right now then there is a high chance that you have, to some degree, pondered what it would be like if there really was a zombie apocalypse. Would all those hours of Nazi Zombies in Call of Duty or your expert marksmanship in Arizona Sunshine help you at all? Does watching Zombieland and reading The Zombie Survival Handbook actually prepare you for the unthinkable?

The answer to all of those questions is almost certainly no, but if you don’t take things too seriously and think it’s fun to gamify all aspects of life, then The Walking Dead: Our World could be just for you.

Similar to Pokémon Go, The Walking Dead AR is powered by Google Maps to display a map of the real world in real-time on your phone screen. You can see your avatar as you physically walk around and explore your environment and it moves in unison based on your phone’s GPS tracking.

You have to physically go out and explore to find missions to complete and play the game itself, which involves killing lots of zombies. From what I’ve seen so far missions include basic “Encounters” in which you clear out a single screen’s worth of walkers, usually five or six, in a matter of seconds. This is the bread and butter of the game and typically rewards some basic cards.

Combat in The Walking Dead AR is simple: you tap where you want to shoot. Try and get as many headshots as possible to take down zombies more quickly, but that’s about it. Your companion will jump in and fight as well and you can even toss out grenades, Pokémon Go-style, by flicking your finger upwards on the screen. 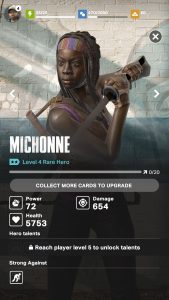 Above: A look at how to upgrade Michonne.

Other mission types include Infestations, which are multiple wave split into separate instances. When you clear the final wave, you get a big reward with a higher chance of scoring rare cards (more on that later.) Then there are Rescue missions, in which you need to kill the zombies harassing a survivor. If saved, you can bring a survivor back to a safe house.

Safe houses are built by players and exist as persistent objects in the game world with a real world location. For example, when I downloaded the game last night I built a safe house on top of my real world house’s location to serve as a sort of base of operations. The trick is that you want to visit safe houses regularly and contribute survivors often to get better rewards.

One downside to The Walking Dead AR that I’ve seen so far is the utilization of an energy system. This means that, for example, you’re given 50 energy points per day and every time you go on a mission it costs energy. If you run out of energy, you can’t do any more missions.

Thankfully it’s very easy to get energy for free without having to pay real money. All you have to do is just get up and go explore. You’ll find supply crates spread all over the world that usually contain energy or some other useful resource as you pass by. You can even buy energy with the in-game currency as well, which is earned by doing pretty much anything and everything.

Currency in The Walking Dead AR is split into three categories: energy (explained above,) coins (which are just your standard in-game currency,) and gold (which can only be earned by paying with real money.) By comparison to industry standards, The Walking Dead AR’s microtransactions are actually pretty tame.

You really don’t need to spend the money, but you can get some cool perks and make things a lot more convenient if you do, especially if you play a lot.

Since you won’t be catching Pokémon in The Walking Dead AR, the collectible angle is replaced with a card-system. Each time you finish a mission, complete a challenge, or do anything that nets a positive reward will result in cards dealt to you face down. You tap on them to turn them over and reveal your prize.

Prizes can be anything from new guns, new followers, new avatars, new perks, coins, energy, and pretty much anything else in the game. All of it is represented on a card. This helps amplify the itching collection addiction that a lot of people have and ensures that you always feel like you’re making some sort of progress while playing.

The Walking Dead AR has a nifty system for making duplicate cards valuable as well. Cashing in duplicates with some coins lets you upgrade your cards, increase their power, and level them up. Using this method I was able to make my Michonne so powerful early on that for a lot of Encounters I could just sit there and let her slice up the zombies all by herself.

Speaking of which, you’ll find a wide assortment of hero followers from characters in the show to random, custom-built followers. They’ve all got their own quirks, traits, and advantages against particular types of zombies. Building out your cast of survivors is important when taking on more difficult Infestations.

Make no mistake about it: gameplay in The Walking Dead AR absolutely can get very boring very fast. This isn’t really the type of game that you’re meant to sit at home and play while watching TV for hours. You’re gonna get tired of it. Instead, it’s best played in short bursts while out and about, waiting in line, walking outside, or doing something else, similar to Pokémon Go.

One thing that would have helped is a bit more level variety to make gameplay more challenging. Forcing the player to move around and dodge zombies would have been neat. You can sort of do this when you enable the AR features, but it’s mostly just optional if you want to have a bit of fun. Tapping heads on slow-moving corpses is anything but difficult.

The Walking Dead AR is just now launching today and it already feels like it’s a bit more feature-filled than Pokemon Go is even two years later. For starters, you can create custom groups inside the game right now and even chat, in real-time, with group members from inside the app.

And one truly brand new feature that The Walking Dead AR introduces is the flare. This nifty item lets you essentially open up a portal at your location that anyone in your group can teleport through and appear beside you even if they aren’t physically there in the real world. While this does remove the “physically move around in real life” angle, it significantly improves things from a playability factor. Using this item you can attract group members of a big event or mission is nearby.

You can drop bait as well to attract zombies and force a lot of missions to appear nearby. Combined together flares and bait mean that The Walking Dead AR is totally playable and fun without even really needing to get up and leave at all.

One system that I didn’t get to see in action is the PvP element, which is supposed to work a lot like Gyms in Pokémon Go. For The Walking Dead AR you’ll assign a group of your followers to a raid mission and then other players will pit their followers against them. You play out battles in real-time on your end, but don’t actually fight players in 1-to-1 real-time combat.

Included within The Walking Dead AR are challenges that can be completed by members of a Group across a Bingo-style board. They include things like eliminate X infestations, kill X walkers with Michonne as your follower, and so on.

So far I can tell one crucial thing that The Walking Dead AR is missing is the sense of specifically directed collecting. And by that I mean in Pokémon Go you can find out where Pikachu like to gather and go out on a mission to catch a Pikachu. You can visit the beach and find Squirtles. And so on. But as far as I can tell, The Walking Dead AR doesn’t seem to be as intelligent about its spawns and locations, other than where not to spawn (like schools).

As of now, it feels like it’s missing those bread crumb trail features to funnel players towards specific things in the real world. Perhaps that will change over time. I could imagine plenty of inventive ways that the developers could initiate outbreaks or quarantine areas of the map as extra dangerous or something like that. And introducing rare, exclusive rewards at those events would be a great way to alleviate that lacking element.

Finally, the only reason we’re really considering this game worth covering, are the AR features. Similar to Pokémon Go you can have the phone’s camera superimpose zombies (instead of Pokémon) into the real world. However, from what I can tell, it works a lot better than it does in Pokémon Go.

When you activate AR mode the game makes you scan the floor for orientation and then the zombies appear within actual 3D space and you can move around them. It works a lot like the AR Stickers for Google Pixel phones. I’m a big fan of the mode and it’s a treat to show to people. There are some photo features as well, which you can see some bits of in this trailer.

Niantic is still clearly the market leader in this genre of game. The recent occlusion tech demo we saw and the prototype real-time multiplayer AR games (Tonehengeand Neon) show a lot of promise from a technology perspective. But as it stands in the current market, The Walking Dead: Our World, fueled by the cross-generational popularity of its brand and the idea of a zombie apocalypse, certainly has what it takes to carve out a chunk of the market for itself.

The Walking Dead: Our World is now available on iOS through the App Store and Android devices on Google Play as a free download with optional microtransactions.

If you decide to play the game, make sure and join the official UploadVR group (named UploadZR) inside The Walking Dead: Our World while there’s still room!