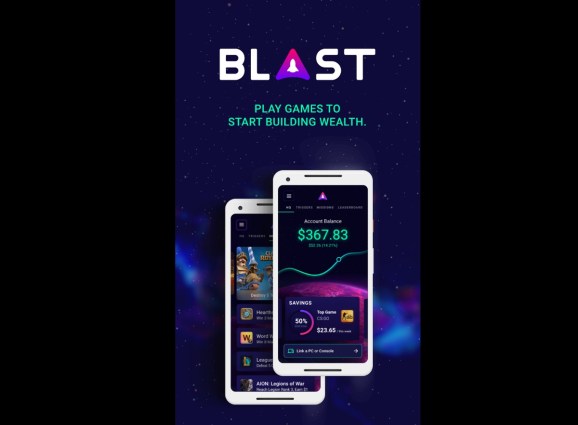 Blast lets you save money every time you hit an achievement in games.

Blast lets gamers save a little bit of money every time they hit an achievement in a game like Counter-Strike: Global Offensive. And that simple idea for “micro savings” has enabled the company to raised $12 million in funding.

The Newport Beach, California-based Blast is also announcing that its app is now available on the Google Play store for saving money in mobile games, and it also said that one of its new investors is Tony Robbins, the inspirational “life coach” and self-help promoter.

The $12 million is an extension, or topping off, on the previously announced round of $5 million in funding that the company disclosed in March.

Blast promises that its micro-savings tools will eventually work with most games, from hardcore hits like League of Legends to casual fare such as Candy Crush Saga. Micro-savings has become popular with credit cards, where your purchases can be rounded up to transfer small amounts of money into savings accounts with every purchase you make. Blast’s sister company, Acorns, handles those transactions.

And now Blast wants the world’s 2.6 billion gamers to save more money, and it believes it can motivate them to do so through game achievements, said Walter Cruttenden, chairman of Blast and its related company Acorns, in an earlier interview with GamesBeat.

“We decided to merge fintech and gaming,” Cruttenden said. “This is not cryptocurrency. It’s real money. It’s a way for people to save.”

Blast creates a wallet where you can store digital money. You can set “trigger savings,” which can generate interest paid on balances, reap dividends from “missions” that you complete in a game, and weekly payouts for those who are ahead on a leaderboard.

In some cases, you are saving money on your own through the Blast Wallet, transferring money from the equivalent of a checking account to a savings account. In other cases, you are earning new money from game companies that will pay you to stay highly engaged with their games.

It’s a twist on “gamification,” which offers game-like rewards for non-game applications.

As the balance builds, a user can elect to let it grow, use the funds for in-app-purchases in their favorite games, move it to a partner institution to be invested, or just take it out of the wallet and spend it.

There are rivals that offer rewards, but Blast is the first high-yield savings account where gamers can save money as they play their favorite games. Blast has integrated with Plaid, which allows Blast to seamlessly work with several thousand banks (all of the majors) on their platform.

Above: Blast will let you save money in a wide variety of games.

Cruttenden said that Blast was started in the past year to focus on gamers. But the idea started with Cruttenden’s Acorns, which built infrastructure to move and invest “micro monies,” or very small amounts of money. Blast builds on this by allowing you to do more things with your digital wallet.

About 70 percent of the population doesn’t even have $1,000 in savings, Cruttenden said. One of the keys here is that the amount of money transferred each time is small. It’s a painless amount, but over time, it really adds up, Cruttenden said.

“Whenever you can break a service into small increments and distribute it widely, it works,” he said. “It worked for Coca-Cola, and they bottled it.”

Besides Robbins, other investors include Palo Alto-based fintech fund CreditEase, and RX3, an influencer-focused VC fund based in Orange County.

In addition, the Leaderboard pays cash to the top 25 percent of gamers each week, including $1,000 to first place. Blast works with all mobile games in the Google Play Store, and is compatible with PC games beginning with Counter-Strike: Global Offensive on the Steam marketplace, with more PC games coming soon.

Blast’s goal is to make savings so exciting and rewarding that more and more people will be encouraged to start saving early and come to appreciate the power of incremental micro-income.

The app works in the background of millions of games like Candy Crush, Arena of Valor and Clash Royale, so game sessions are never interrupted. Blast will continually add support for additional PC games on Steam, and the company has started a waitlist for games on iOS, which launches this fall.

“It’s tough for most people to save money, so we created Blast to help people start
accumulating wealth simply by doing what they already enjoy – playing their favorite games,” Cruttenden said. “Blast takes something hard or boring – like saving money – and makes it fun and easy through gaming. The app is simple to use for both avid and casual gamers and adds a new dynamic that can make games more interesting. Gamers tell us they feel better with the time they spend gaming when they know they are micro-saving or micro-earning in the background.”

“Following my aXiomatic investments in esports, such as Team Liquid and Super League Gaming, I’m committed to pursuing growth opportunities across the gaming spectrum,” said Robbins, in a statement. “I believe Walter and his talented team are introducing a unique formula that combines savings with fun that will level-up gamers
around the world.”